Sometimes You Get Socks: Murder for Christmas (1941), Edith Howie

I've reached the age, to be candid, where I don't mind getting socks for Christmas (in moderation anyway), but, yeah, when one is a kid, socks as presents make downright duds.

It appears that Edith Howie was born, and lived her life, in Sioux Falls, South Dakota and that on the eve of publishing her first mystery novel, Murder for Tea, in 1941, she resided with her parents, William and Christy Howie, and was about forty years old (This is of some interest to me, since I was born in Vermillion, South Dakota about a quarter century later).

Howie's next two novels, Murder's So Permanent and Murder at Stone House (both 1942), were also published by Farrar & Rinehart, but her last three were taken up by M. S. Mill, which seems rather a come-down.  After 1946 Howie apparently published no additional novels. 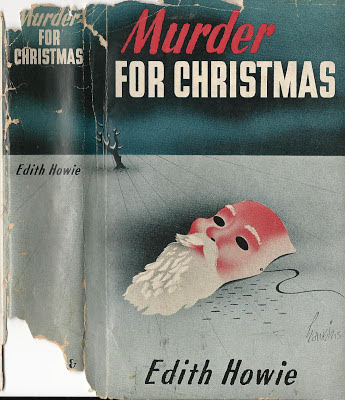 New Republic declared that Murder for Christmas "has settings and people as classy as anything out of Ngaio Marsh" and Saturday Review pronounced the novel "fantastically characterized."

There certainly is a resemblance to Ngaio Marsh's Death and the Dancing Footman, which came out the next year, in the setting (snowbound country house party).  And, indeed, to carry things  a step further, there's a striking resemblance to Marsh's Tied up in Tinsel, which appeared thirty years later (in 1972), in a key plot mechanic.

Did Marsh actually read this detective novel (some of Howie's books, including Christmas, were published in England too)?  Maybe so! Be that as it may, however, Howie simply is not in Marsh's league as a mystery writer.

Howie's house party in Christmas does have a lot of arty types in attendance, including stage actors and Russian ballet stars, but they aren't memorably characterized, Saturday Review notwithstanding.  Nor is the plot, built around the murder of a wealthy, much married man, hated by all and sundry, anything special.

There's a newlywed wife of a private detective who functions as the Rinehart-ish narrator (the couple is stranded at the house by the snowstorm), but she's not memorable either.

When this narrator, Marcia Holgate, declared of the second murder victim

I was thinking, well, Marcia, my dear, I could, personally.  Heck, I couldn't even remember whether Daphne had uttered a word of dialogue before her demise.

My favorite passage concerned Marcia Holgate's observations on the police lieutenant, Bassett, who eventually shows up at the house.  He displays "the eager friendliness of a puppy," notes Marcia (a "bassett" hound, no doubt).  We're a long way from hard-boiled here, folks!

There are also some amusing typos, all marked by a pedantic prior reader (who read this book three times in the 1940s!), like the one where Marcia mentally relives "the events of the past few years [sic]."  To be fair to Marcia, to me this book certainly did feel like it took years to read!

My favorite thing by far about Murder for Christmas is the wonderful Dali-esque book jacket by Arthur Hawkins, Jr. (1903-1985), one of the great illustrators in Golden Age mystery (and much as as well).  Here's something to look at if you have $28,500 to spare--or if you just want to learn more about a one of the greats.
Posted by The Passing Tramp at 4:21 AM