"And that's true," put in Miss Ames.  "For two people who loved each other to distraction, I often thought the Emburys were the most quarrelsome couple I ever saw."


Carolyn Wells was a popular and prolific American mystery writer who published eighty-two detective novels between 1909 and 1942.

She often is considered a pre-Golden Age writer, although most of her criminous output (she also was a well-known author of humorous verse and juvenile novels), almost seventy novels, actually appeared from 1920 onward.  She also wrote a book on mystery literature, The Technique of the Mystery Story (1913; expanded 1929).

In his 1982 book Gun in Cheek, Bill Pronzini famously lampooned Carolyn Wells (or perhaps he might say he allowed Wells to lampoon herself) as one of his masters of "alternative" crime fiction (crime fiction enjoyable not on account of how good it is, but how bad it is). Pronzini pointed out the frequent improbable, even ridiculous, situations in her books (among other things Wells was great addicted to secret passages).

Similarly, in their massive encyclopedia A Catalogue of Crime (1971; expanded 1989), Jacques Barzun and Wendell Hertig Taylor condemned Wells for the silly characters and situations often found in her mysteries. Most recently, John Norris spent two days reading a trio of Wells books for a blog piece and he concluded that "even as 'alternative classic' reading it was a tortuous couple of days." 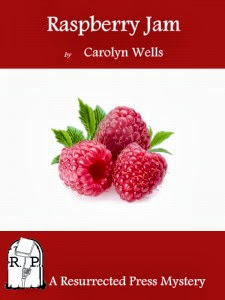 After Wells' death it appears that none of her mysteries were reprinted until the last decade, which has seen the rise of the print-on-demand micropress. All, or certainly most, of the now copyright-free detective novels that Wells published prior to 1923 are now in print, many of them through Resurrected Press, which has provided prefaces for each book.

In contrast with Pronzini, Barzun & Taylor and Norris, RP assures readers that it is her "examination of human nature that makes Wells worth reading today.  While the manners and speech of her characters are definitely of the period, their emotions and reactions are handled as deftly by Wells as by most modern mystery writers."

Some readers on the internet also have reported enjoying Wells' mysteries.  Case in point, Raspberry Jam (1920), which has been praised by some on Goodreads and Amazon, and by internet crime fiction critic Mike Grost.  Certainly the novel has one of the oddest, most counterintuitve titles of any detective novel I can recall (I am also reminded of John Rhode's Vegetable Duck).

I have perused my share of Carolyn Wells, and I have to say that Raspberry Jam indeed is one of the better books by her that I have read (some, I must admit, have been very bad). The novel centers on the locked room poisoning (I won't get into the exact means of the poisoning, which seems improbable), in a tenth-floor luxury New York apartment, of wealthy clubman Sanford Embury.

The poisoning takes place in a suite of three rooms, occupied by Embury, his beautiful wife Eunice and Eunice's eccentric visiting spinster aunt, Abbey Ames.  These rooms all were securely locked, so suspicion falls on Eunice, who is known for her utterly ungovernable temper.  Suggestively, she had an argument with Sanford the night before his death, over his refusal to give her an allowance (I seem to recall an I Love Lucy show like this, though the quarrel between Lucy and Ricky did not end in murder).

This quarrel over the allowance with her patronizing husband gave me a lot of sympathy for Eunice, but she squandered it when the police showed up and she ordered them out of the apartment and actually physically attacked one of the detectives when he did not go.  Instead of carting her off for assaulting a police officer, they seem amused by the incident, on account of the fact that Eunice is (1) beautiful (2) young (3) rich.

I have seen this before in Wells books, where the police allow members of the upper class, who view them with contempt, a great deal of leeway that no one else would get (pretty young woman are especially indulged).  Wells, who came from a privileged position in life herself, seems to share the same attitude as her upper class characters.

One police detective, Shane, the author refers to as "a rude, unkempt, common man" who strides into Eunice's apartment "with a bumptious, self-important air, his burly frame looking especially awkward and unwieldy in gentle surroundings."  The next page, the author continues this catalog of faults, condemning Shane's "heavy voice, which was coarse and uncultured but not intentionally rude."  She later takes note of his "ugly features." Subtle stuff indeed!

Another character reminds Eunice that Shane is "a common clod, but he represents authority--he represents the law, and we must respect that fact, however his personal manner offends us."  Yet this nod to the imperative for deference to authority (which, after all, protects wealthy, idle property owners) does not prevent this scene:

Eunice flew at Shane like a wild thing.  She grasped his arm and whirled him around toward her as she glared into his face quivering with indignation.

"Coward!" she flung at him.  "To attack two helpless women--to accuse me--me!, of crime!  Why, I could kill you where you stand--for such an insinuation!

"Say, you're some tiger!" Shane exclaimed, in a sort of grudging admiration.  "But better be careful of your words, ma'am!  If you could kill me--ah, there!

The last exclamation was brought forth by the sudden attack of Eunice, as she shook the big man so violently that he nearly lost his balance.

I couldn't help thinking how less indulgent the police reaction would be had Eunice been a laundrywoman or cleaning lady, say.  Even if one accepts that this is believable behavior on the part of Eunice and the police, the fact that Wells seemed so much in sympathy with the arrogant Eunice was kind of offputting.

By the end of the book, I was finding Eunice Embury an utterly tiresome character.  Some may see her as an early assertive woman in crime fiction, but I think this is trying to put a positive gloss on what is simply overweening class arrogance, whatever the gender of the person.

Much superior in my view is Miss Abby Ames, an admirably-portrayed eccentric New England "spinster" type whose interest in spiritualism plays a big role in the tale.

Miss Abby also provides us with the key clue, which does indeed concern raspberry jam.  It takes about 75% of the book to find out what the heck this comestible has to do with the darn story, and I sure was dying to know by that time!

Unlike some of the Wells' books I have read, this locked room mystery, while certainly lacking the dazzling complexity of John Dickson Carr and his followers, is fairly clued--though it is solved mostly through the efforts of Terence "Fibsy" McGuire, the "saucy" boy assistant of Wells' Great Detective Fleming Stone.  Though his dialect is very odd indeed, the working class Fibsy is vastly more interesting than the bland and boring patrician Fleming Stone.

One of the handsomest types of American manhood is that rather frequently seen combination of iron-gray hair and dark, deep-set eyes that look out from under heavy brows with a keen, comprehensive glance.

This type of man is always a thinker, usually a professional man, and almost invariably a man of able brain.  He is nearly always well-formed, physically, and of good carriage and demeanor.

At any rate, Fleming Stone was all of these things, and when he came into the Embury living room his appearance was in such contrast to that of the other two detectives that Eunice greeted him with a pleased smile.

Despite Fleming Stone's "good carriage and demeanor," however, it must be admitted that pretty soon Eunice, consumed by yet another towering rage, is ordering Stone to roll out of her home too.

Fibsy McGuire seems to have appeared in only about eight Fleming Stone books, from 1917 to 1923, which is too bad, because he is much more appealing, I find, than both his boss and Wells' usual crew of snobbish moneyed patricians.  I like to think that young Fibs went into practice for himself, perhaps rubbing shoulders in the 1930s with Sam Spade and Philip Marlowe.  The latter two men, no doubt, would have had some choice words to say about that stuck-up dame Eunice.
Posted by The Passing Tramp at 6:28 PM