Hasty Pudding, by Mignon Eberhart (as imagined by The Passing Tramp)

Readers of this blog may know that I have a certain fondness for the romantic crime fiction of "America's Agatha Christie" (as she was dubbed), Mignon Eberhart (1899-1996).  See "Wedding from Hell," my review of Eberhart's 1943 novel Unidentified Woman here.

Long-lived and hugely prolific, Mignon Eberhart has a tremendous number of crime novels to her credit, but, it's like with chocolates, don't you wish there were another? Something like this mysterious fragment that I reproduce here.... 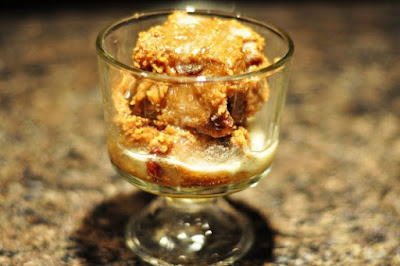 As Creme added the molasses to the corn meal she suddenly realized that something was wrong.  Just how utterly, terribly wrong Creme did not realize until after that deviled casserole of murder and mayhem had been laid down before them at the dinner table of their lives in all its steaming horror. Before it was all over everyone had seconds.

Creme's slender fingers, from which she had reluctantly removed her engagement ring not long ago, reached for the milk to add to the corn meal and molasses mixture.  While Creme stirred she was reminded of that cruel hand of fate that had placed her here in the vast, old-fashioned kitchen of Brulee Hall, the stately mansion in the Louisiana bayou country that for generations had been the cherished ancestral home of Creme's people.

Creme's mother had died in childbirth, leaving to her bereaved husband, Brule, a bouncing baby Creme, as well as her valuable collection of rare cookbooks.  With only young Creme--admittedly shy but such a lovely and sweet-natured child--and his wizened Cajun housekeeper, Gumbo, to keep him company, Brule Brulee fell prey to the beautiful, exotic divorcee Tannis Anise while he was on a New Orleans business trip.

Brule had been seeking to improve the terms of the mortgage on Brulee Hall in consultation with the family attorney, crafty old New England Yankee Clement Chowder, when he came across the stunning Tannis, who had an appointment at Clem Chowder's law office to see about getting an increase in the alimony from one of her former husbands. Upon her marriage to Brule, which followed soon thereafter,Tannis fatefully brought with her to reside at Brulee Hall her own daughter, Star.

Star, ruminated Creme bitterly, how appropriate that name was!  For it was indeed a star-crossed day when the dainty feet of Star Anise crossed the hallowed threshold of Brulee Hall.  As Brule Brulee aged he fell increasingly under the sinister domination of the haughty Tannis, who always made sure that it was her own shining Star who got the best of everything, while Creme had to settle for the leavings.

It was Star who got the precious Brulee family recipe for hasty pudding.  It was Star who got all the copper saucepans.  It was Star who got Brulee Hall after Brule Brulee passed on and Tannis, felled by a poorly coddled egg, followed Brule into the Great Beyond three years later.  And it was Star--having at her disposal all the culinary arts of Paris, where she had been sent to cooking school--who ensnared Creme's own childhood sweetheart and fiancee, Boeuf Bourguignon.

Creme vividly remembered the heart-rending agony of that day when she received the wedding invitation. Sometimes in her bleakest hours she wondered, just a little bit, whether the cruelty in Star's words could possibly have been intentional.  But, no, surely not!

Dear Creme, the letter had read:

It seems, my dear, that I have just gone and snapped up your great big portion of Boeuf, right out from under your own silly little nose! What he ever saw in a pathetic drip like you I simply can't imagine! Anyway, be that as it may, you know I will simply die if you won't be my maid of honor at the wedding, so that I can rub the whole thing in your insipid face!  Please do say yes.

What could Creme do?  For advice she turned, as always, to her old maternal aunt, jolly, fat Vicky Soise, for whom she served as companion after her father's death. (Tannis and Star had made it sufficiently clear that her presence was no longer desired at Brulee Hall.) Creme was told in no uncertain terms by the aged lady that even in these degenerate days family was family and nuptials were nuptials, even when you'd like to strangle the bride with your own bare hands.

Aunt Vicky herself could not attend, but of course she would pay Creme's way down to Bayou Brulee and back.  Why, Creme should consider the trip a vacation!

Wow, I don't know about you, but I can hardly wait to read Chapter Two.  Things look like they're coming to a rolling boil at Brulee Hall!  Stay tuned.
Posted by The Passing Tramp at 10:20 PM