"Corn as high as an elephant's eye"--I was reminded of this line by this forgotten mystery novel from 1935: Crime in Corn Weather, by Mary Meigs Atwater.  Though the line comes from the musical Oklahoma! I don't see why it shouldn't appy to Iowa as well, especially after reading Atwater's book.  The atmosphere of corn is so palpable that as you read you feel it all around you...As in fact do the citizens of the town of Keedora, Iowa, the setting of the novel:

Keedora lay like an island in a sea of corn that lapped at the fringes of the town. Houses that ventured out only a little way beyond the concrete, the iron lampposts, and the clipped lawns were overwhelmed in it--a vast green tide that stood half-roof high like a tidal wave about to break.


Atwater describes "corn weather" as "smoldering, baby-killing, soul-sickening weather." Corn may thrive in that sort of weather, but humans don't. Yet excitement comes to enervated Keedora citizens when Will Breen, "president of the People's State Bank, ex-mayor, and prominent citizen"--disappears.  Like banker Mr. Potter of It's a Wonderful Life (1946), for whom he could have served as a prototype, Will Breen is hated by everyone in his home town, so if he's been murdered (and he has--readers are shown the killing at the beginning of the novel), there's no shortage of suspects. Heading the list is his nephew, Harold, whose inheritance Will was to control until Harold turned 25.

Atwater does a fine job of portraying life in small Iowa farm town in the 1930s.  She shows how a murder is, first and foremost, just plain exciting to the locals, especially when the victim is Will Breen, someone no one liked anyway, not even his mother, old (she's all of seventy) Grandma Breen.  Although, in contrast with some of the people who have read Corn Weather (it was reprinted in 1992 by Interweave Press--see left--but since forgotten), I do not see the book as a comic novel, there are some excellent sardonic passages about the townspeople's reaction to the "tragedy" in their corny midst.

When a spade is discovered that might have been used to bury Will Breen in a shallow grave somewhere in the cornfields, there's considerable morbid fascination among the townspeople:

The spade was carried, in great excitement, to the sheriff's office.  For months it might have been seen there, standing in a corner against the wall.  Perhaps it is still there. Mrs. Belinda Blum, the Woman's Club poetess, wrote a sonnet to it, beginning:

O implement of honest, useful toil,
To what dread use hast thou been put, alas!

She sent the poem to the Bugle and it appeared, in a neat box of black lines, in the middle of the editorial page on the day of the great mass-search for the "corpus delecti," and it was later copied by many papers all over the country.  So it was to William Breen that Mrs. Blum owed her literary triumph.  She later delivered a paper on "The Art of Poesie" before the Woman's Club in which she explained just why she had decided on "implement of honest, useful toil" rather than "honest implement of useful toil" or "useful implement of honest toil."  It made a very profound impression. 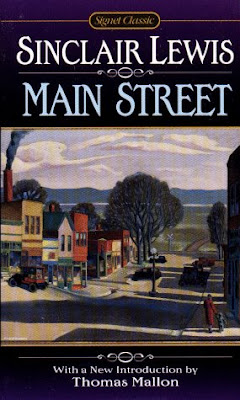 I was reminded at times of Sinclair Lewis' Main Street. although I would say Atwater's satire is more affectionate than condescending (Atwater ultimately is more Willa Cather than Sinclair Lewis).  She seems genuinely to like many of the people in the town and to have sympathy for their troubles.  Among others we have:

Grandma Breen, forced to endure the indignities of her cold son gradually taking over her house;

Norman Jeffers, a Great War veteran who never recovered from his battlefield experiences (he sneers in disgust when someone mentions his local medal ceremony of long ago);

Milly Slater, the nice young woman "in trouble" who in desperation visits an abortionist (the harrowing aftermath of this visit is directly described by the author: the patient, suffering from hemorrhages, is bundled out of the house by family members, the abortionist all the while demanding that the bedsheets the girl is wrapped in be returned to her). To allude to out-of-wedlock pregnancy and even abortion by a "nice" middle-class girl in a mystery genre novel from the 1930s is extremely unusual in my reading experience.

In addition to her bluntness on sexual matters and her strong grasp of setting and character, the author has a nice touch with prose imagery.  See, for example, this passage that comes from the section of the novel detailing Keedora's carnival-like "corpus delecti" hunt, for which practically every citizen--man, woman and child--has turned out:

The big ice-cream freezers standing under a tree were guarded by a severe woman armed with a long spoon, who was holding off with difficulty the usual swarm of small boys that always gathers about a parked ice-cream freezer as fruit flies gather to a basket of grapes.

Gradually, it dawns on us that Crime in Corn Weather is less a a detective novel than a novel about a murder and its impact on a community (and that impact isn't quite what W. H. Auden--see his "The Guilty Vicarage" essay--thinks it should be!).  In fact Corn Weather is more an inverted crime novel, with memorable rural local color (pretty early on the reader should realize who the murderer is, by the author's intent).  It is well worth reading as such--just don't expect an Agatha Christiesque clue puzzle!

Who was Mary Meigs Atwater (1878-1956)?  A granddaughter of Montgomery C. Meigs (1816-1892), Quartermaster General of the United States during the American Civil War, she was born in Illinois but raised in Iowa and educated in design at the Chicago Art Institute and in Paris.

After marrying mining engineer Maxwell W. Atwater, she traveled with him around the American West, Mexico and South America, after his death settling permanently in Montana, where she organized a nationally influential hand loom weavers' guild (today she is known as "the dean of American handweaving").

According to Linda Ligon of Interweave Press, author of the preface to the 1992 reprint edition of Crime in Corn Weather Atwater was fascinated with the criminal mind and "frequented the scenes of violent crimes, attended local trials, and wrote 'whodunits' and articles for True Crime magazine in the wee hours of the morning, after finishing her work for the Shuttle-Craft Guild of American Handweavers."

Linda Ligon comments that Crime in Corn Weather "doesn't fit into either of the major mystery genres of the day--the 'tough guy' stories of Dashiell Hammett and Raymond Chandler or the bucolic 'cozies' of Agatha Christie and Dorothy Sayer [sic]." Of course there were many, many mystery novels of the day that did not fit "cozily" into these two "genres" (and I dispute the claim that all the novels by Christie and Sayers were bucolic cozies), but Crime in Corn Weather is still something out of the common rut.

Reading Crime in Corn Weather--a small number of copies of the reprint edition can still be found at low prices--is educational as well as entertaining.  Try it!