"There is no smart-aleck and omniscient detective"

Publishers are in the business of selling books, so what they say about the books on dust jackets tells us something, surely, about how publishers perceive the buying trends of readers.  Today I'm posting a scan of Random House's blurb for Dorothy Cameron Disney's HIBK mystery novel Strawstack, along with the front panel of the dust jacket. Both items happened to be pasted in and thus preserved in my copy of the book. 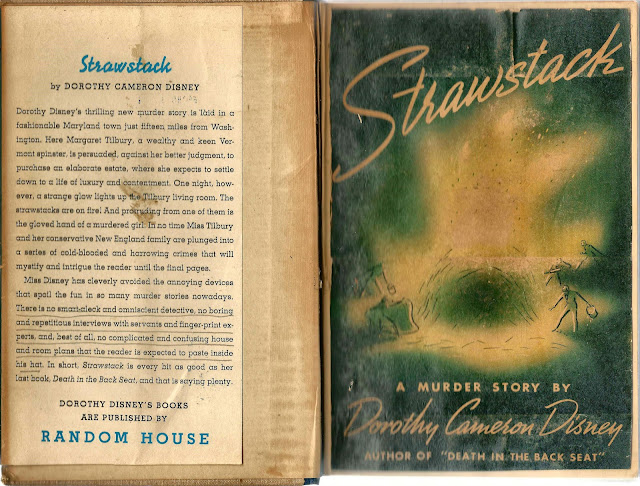 2011 George N. Dove Award winner Catherine Ross Nickerson (whom I've been mentioning a bit in blog posts lately), sees the Golden Age, female-authored HIBK (or romantic suspense) novel as the primary alternative style within the mystery genre to American hard-boiled and British classical detection (she sees American classical detective novels as mere knock-offs of the British variety, which I think greatly slights the American tradition of classical detection; the recent Cambridge Companion to American Crime Fiction that she edited does not mention, for example, Melville Davisson Post or Ellery Queen).

"Miss Disney has cleverly avoided the annoying devices that spoil the fun in so many murder stories nowadays.  There is no smart-aleck and omniscient detective, no boring and repetitious interviews with servants and finger-print experts, and, best of all, no complicated and confusing house and room plans that the reader is expected to paste inside his hat."

They've just dismissed a slew of things I love in mysteries!  Gosh darn those "complicated and confusing" house plans (ironically, there's a great one in the HIBK Urtext, Mary Roberts Rinehart's The Circular Staircase, by the way, not to mention one in Mabel Seeley's HIBK The Chuckling Fingers, just reviewed here).

Clearly, though, Random House was trying to appeal to an audience that was perceived to be wearied with heavily puzzle-focused mysteries and more interested in depictions of emotional tension.

See how two modern readers reacted to Strawstack ("a murder story"), here and here.
Posted by The Passing Tramp at 3:32 PM