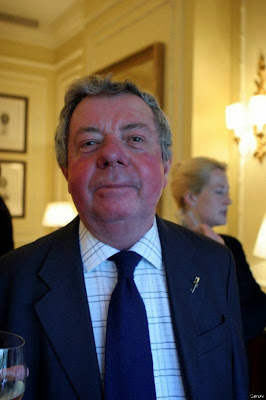 Especially sad news for me: Robert Barnard, about whom I have blogged here several times, passed away last Thursday. Martin Edwards appears to have broken the news on the internet; it doesn't seem to be in any online news sources, perhaps an indication of Barnard's somewhat diminished fame over the last dozen years or so.

When I started reading mysteries again back in the 1990s, Robert Barnard, along with Reginald Hill and Peter Lovesey (with whom he shared the same birth year) and of course P. D. James and Ruth Rendell, seemed to me like one of the bigger English names in the genre, with many of his titles being reprinted in paperback by Penguin.

Barnard always enjoyed a following among Anglophile American mystery fans and his American publisher, Scribner, stayed with him for thirty-five years, from Death of a Mystery Writer (1978) (Unruly Son in England) to his last novel, A Charitable Body (2012) (in England in the last dozen years, however, he went from HarperCollins to Allison & Busby, who did not publish his last novel). 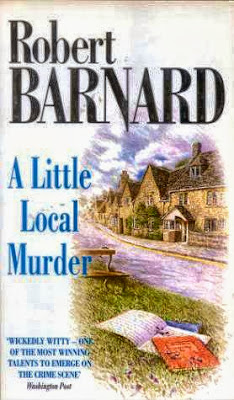 I started reading Robert Barnard in the mid-1990s and loved the wit and humor in his mysteries.  Some of my favorite books by him, besides Death of  a Mystery Writer, were A Little Local Murder (1976), Fete Fatale (The Disposal of the Living in England) (1985), classic satirical English village mysteries, Death of an Old Goat (1974), a wicked satire of academia and the entire country of Australia, Blood Brotherhood (1977), a satire of modern English religion, and such excursions into period mystery as Out of the Blackout (1984), The Skeleton in the Grass (1987) and A Scandal in Belgravia (1991).

All the above books were standalones, but I also enjoyed the Perry Trethowan series, five books published between 1981 and 1987.  The fourth of these PT novels, Bodies (about murder in the milieus of bodybuilding contests and skin mags), introduced a new series character, a black cop names Charlie Peace.  He would appear in, I believe, thirteen more novels (though no website seems to get this right):

Back in the 1990s I read and enjoyed the first four novels in this series, but then fell away for some reason.  I am reacquainting myself with this series now and will have more to say about it on Friday.  Meanwhile, see my reviews of two other Barnard novels and a short story collection.

Also coming up soon, I hope, my review of a novel by Sophie Hannah, the new chronicler of Hercule Poirot.
Posted by The Passing Tramp at 3:54 PM