Anthony Wynne (1882-1963), "a prominent London physician...deeply interested in the psychological aspect of crime." 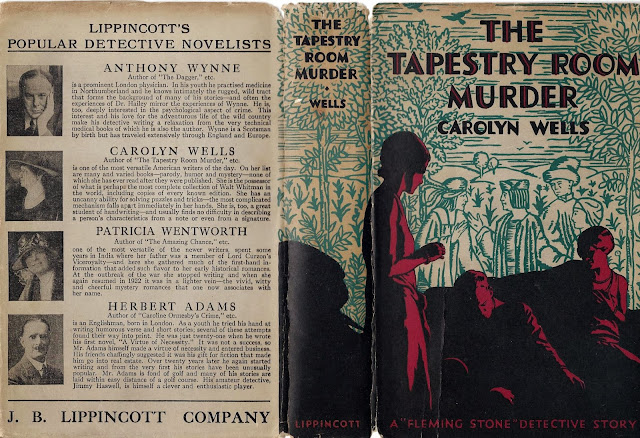 Not really a young crowd (the youngest was 47), I would say, and very British, with Carolyn Wells being the only American (and she was more British than the British by this time).

So how many of them have you read? Only Patrica Wentworth enjoyed much life after death, on account of her elderly lady detective, Miss Silver.

I have reviewed Wells, of course, but also Wynne and Wentworth.  I have never seen those particular pictures of those three authors, except on Lippincott dust jackets from this period, so I thought they might be of some interest.

Incidentally, The Tapestry Room Murder came out in early January 1929 and is dedicated by Wells

Woodrow Wilson famously liked detective fiction, and so did Franklin Roosevelt, but you hear a lot less about Herbert Hoover in this regard.  Maybe after the Great Depression struck, he was not considered such a good celebrity endorsement!

However, presidential admiration for Carolyn Wells seems to have been bipartisan in the 1930s.

Franklin Roosevelt took one of her books on vacation with him (along with a J. S. Fletcher).  But guess who FDR supposedly was reading when he died?  John Dickson Carr, that's who (more on this later).
Posted by The Passing Tramp at 3:46 AM