A Christmas Number: Do Not Murder Before Christmas (1949), by Jack Iams

Jack Iams (1910-1990) was a journalist and novelist who published a small body of crime fiction in the late 1940s and the 1950s.  A graduate of St. Paul's School and Princeton, he was involved with theatricals at both schools and after WW2 was a television critic for the New York Herald Tribune.

His crime writing in my experience is charming and amusing, kind of an Americanized version of British manners school of Dorothy L. Sayers and Ngaio Marsh.  However, Do Not Murder Before Christmas definitely has American elements to it, such as the crusading young journalist sleuth and the corrupt city administration.

What happened to all these fictional idealistic journalists in crime fiction, incidentally?  They were quite common in the United States in the 1930s and for decades thereafter, but they seem rarer now.  Are we as cynical about journalism as everything else these days?

Anyway, there's also a beautiful blonde, Jane Hewes, and a love triangle to go along with the obligatory murder.  Our hero must overcome a sneering, privileged Ivy Leaguer to win Jane and solve the mystery. 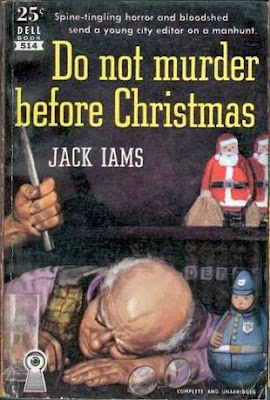 What is the mystery?  Why, who killed Uncle Poot, the kindly and beloved old Dutch toymaker, on the eve of his Christmas party for all the poor tots of Shady Hollow, the slum of the anonymous small city where the novel takes place.

It seems old Uncle Poot kept records going back for decades on the children who patronized his store as to which were naughty and which nice, and someone may have decided that the old Dutchman knew a little too much about these matters.

Though the murder ends up implicating two important families, the aristocratic but decaying Derwents, and the nouveaux riche and corrupt Malloys, our crusading journalist, Stanley ("Rocky") Rockwell, lets nothing get in the way of his pursuit of the truth.  He even finds time to throw the city's African-American children a little Christmas party after Uncle Poot is killed (these children were excluded from the Malloy's charity event).

As the above indicates, the social sentiments in this novel are more advanced than those in James M. Fox's The Gentle Hangman, recently reviewed here, although at one point, after Rocky fights and, through luck, knocks out Jane's snotty boyfriend, Jane gives Rocky a "half-rueful, half proud" smile and observes, "Isn't it awful how bloodthirsty women are?"

I found it funny how this same observation--that women love violence more than the men actually committing the violence--occurred in American mysteries published within a year of each other at the mid-twentieth-century that I read back-to-back.

Iams' narratives go down like the smoothest of eggnogs, and you can easily read Do Not Murder Before Christmas in an evening (I especially liked the chapter titles, which are adapted from the poem "The Night Before Christmas/A Visit from St. Nicholas").  It's a good example of American detective fiction at that time, with its zippy narrative and streamlined mystery.  Personally I prefer the dense clue puzzles of the 1920s and 1930s, but I can't deny that Iams' novel makes an entertaining read--and one that certainly won't get too much in the way of last-minute holiday shopping.

An earlier Christmas Number: Jefferson Farjeon's Mystery in White.
Posted by The Passing Tramp at 5:55 PM