Mary Roberts Rinehart's Episode of the Wandering Knife collects two novellas,  the title tale and "The Secret," as well as a long short story, "The Man Who Hid His Breakfast."

"Episode of the Wandering Knife" and "The Man Who Hid His Breakfast" are, I think really first-rate Rinehart tales.  "The Secret" is much weaker, in that "the secret" in the tale is a trite plot device.

Yet even it was a pleasant surprise, in that it was a Nurse Hilda Adams story.  Nurse Hilda Adams was a character introduced by Rinehart all the way back in 1914, in the novella "The Buckled Bag."  I had thought until now that Nurse Adams only ever appeared in two 1914 novellas and two novels, published a decade apart in 1932 and 1942, but I found she also appeared in this additional, final novella, evidently written in the mid-/late-1940s. 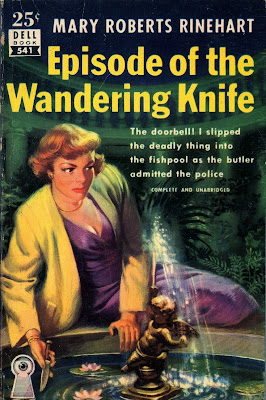 The title story offers a gripping and at times grimly amusing situation of multiple murders and a killing knife that wouldn't stay put.  All the Rinehart staples are present: the wealthy family, the old mansion, the secret buried in the past.

Rinehart is associated with wealthy "nosy spinster" narrators because of her most famous novel, The Circular Staircase (1908) (I know she also used this type in The Case of Jennie Brice, 1913, and, as I recollect, The Door, 1930), yet in the novel The Wall, as in "Knife," the narrator, Judy Shephard, is a comparatively young, unmarried woman who finds romance in between murders.

Even though only five years separate The Wall (1938) and "Knife" (serialized in 1943) you get a definite feeling that times have quite changed in the good old U. S. of A.  In "Knife" the heroine's mysterious love interest, Tony King, makes repeated disparaging comments about the wealth of her family, and she herself is embarrassed and defensive about it (especially that barracks of a family mansion).

The feeling we get is that with the war on more sacrifice is expected of the wealthy (and that it will be willingly given).  Judy Shephard also gets to demonstrate some athletic prowess and more outspoken language, including the epithets "hell" and "damn," and she is looking for serious war work (i. e., a job), all of which makes her more of a discernible modern type.

Additionally we learn that the Shephards are comparatively new money.  They come off rather better than the old money family in the tale.

The plot itself is a good one, intricate but clear, and the writing is lively, with the relationship between the narrator and her willful mother especially well-conveyed (and frequently humorous) and the romance between Judy and Tony subtly and charmingly done. At about 40,000 words, "Knife" could have been expanded into a full scale novel, but I like it as is.

At about 10,000 words, "The Man Who Hid His Breakfast" is considerably shorter than "Knife," but it's just right for its length as well.

It's an unusual tale, in my experience, in Rinehart's output, in that not only does it have no first person narration, but it has a male protagonist, a police inspector on his last case, (his retirement being imminent), and that there's an emphasis, quite uncommon in the Rinehart canon, on material clues.

The central character, Tom Brent, is a wonderfully-portrayed character, decent and fatherly, despite his tired feet and conflicts with his obnoxious political hack superior and with his wife over plans for retired life (he wants to start a dog kennels, she a chicken farm). Rinehart effectively captures the different focus of this tale in her narration:

He went slowly down the stairs, aware that Joe's eyes were following him with something like pity. For this was his last case before he retired, and it looked like a stinker. A man ought to be able to get out quietly, to end his long service with dignity. But this murder was front-page stuff. The big substantial house, the social standing of the family insured that it would be plastered all over the front pages of the newspapers. Already reporters were crowding the pavement outside.  Soon he would have to call them in and tell them something.  He didn't know what.

For the Rinehart traditionalists, however, rest certain there's young love present too.  Yet it's Inspector Brent's show.  Had the very wealthy Rinehart needed to write a novel of year like many "lesser," improvident and impecunious crime authors, she most definitely could have built a series around this guy.

Mary Roberts Rinehart, police proceduralist: Had we but known!
Posted by The Passing Tramp at 1:49 PM