Have You Seen This Gorilla? The Body Missed the Boat (1947), by Jack Iams

I earlier reviewed Jack Iams' Christmas mystery, Do Not Murder Before Christmas (1949) and I enjoyed it enough to go back and look at another Iams book, his first criminous tale in fact, The Body Missed the Boat (1947).

Set in Brazzaville in French Equatorial Africa, Boat draws on Jack Iams' experiences during WW2 working for the Office of War Information.  Iams reported enjoying his time in Africa, concluding wryly that he likely was "the type that goes to pieces gracefully in the tropics."

One imagines as well that the success of fellow American Matthew Head's (art critic John Canaday) first African mystery, The Devil in the Bush (1945), may have had some influence of Iams' choice of setting.

While Iams' Christmas is an enjoyable tale, I preferred Boat, in part for the comparative originality of the colonial African setting.

To be sure, both are smoothly written novels--Iams was a skilled popular writer--with some appealing humor; yet Boat also boasts a plot that kept me on my toes. I did not foresee the solution.

Boat could have been alternately titled The Gorilla Box Murder, for it details the fallout when the American consul in Brazzaville is found dead from poison in a box that was supposed to contain a gorilla, Mama Bu-Bu, consigned for shipment to the United States. 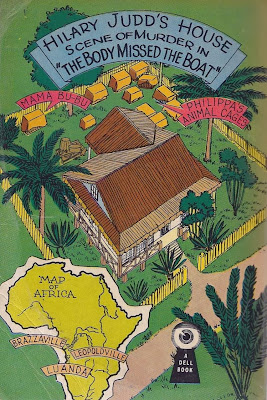 The narrator is the good-hearted young vice-consul, Freddy Benson. Besides Freddy, there is a winning cast of characters, including the sinuous French consulate secretary, Yvette Armenois; the cool and clever Hilary Judd, a British woman working for Radio Brazzaville with whom Freddy is quite smitten; Philippa Darrow, "professional animal huntress"; Larry Brune, Radio Brazzaville correspondent; and the commissaire de police, Anatole Mauclerc (the Inspector Maigret of Africa). Iams writes male and female characters equally well, I think.

Boat has fine humor (the murdered man incidentally was an objectionable individual whom everyone justifiably loathed), often directed at the diplomatic service (there's also an amusing portrait of a fish-out-of-water FBI man), and an ingratiating narrative.  Like Iams' previous novel, I found it a book that could be finished in an evening with much enjoyment.  The plot is clever and the local color first rate.  Recommended.
Posted by The Passing Tramp at 11:43 AM