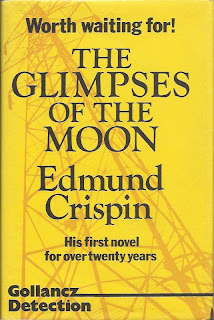 "Worth waiting for!" the publisher Gollancz assured Edmund Crispin's fans when The Glimpses of the Moon finally appeared in 1977, twenty-six years after the last Crispin detective novel, The Long Divorce (1951).

Bruce Montgomery had started the novel as far back as 1965 or 1966, but had been able finally to complete it only after his marriage to his secretary Ann Clements in 1976.  Clements was able to manage her alcoholic husband, difficult as he could be at times. "In many ways," notes Montgomery's biographer, David Whittle, "Ann became Montgomery's nurse, but she was an exceptional woman."  She needed to be in dealing with Montgomery:


"In the 1970s, [Kingsley] Amis recalls  receiving telephone calls from Ann introducing Montgomery who, when prompted by Amis, would reply with no words, just vague noises.  He was probably so drunk that he could not speak.  Amis would keep on trying to get a word out of him, with little or no success.  Montgomery's sister, Shelia Rossiter, recalled visiting Ann to have coffee one morning and arriving slightly early.  Montgomery was still in his dressing gown, drunk and abusive, and demanding to know what she was doing there.  Rossiter could not tell whether this was the effect of the previous night's drinking or because he had made an early start.  From time to time Ann would pack him off to Moorhaven for another course of treatment.  Against Ann's wishes Rossiter visited him, and on one occasion found him more or less crawling up the walls.  Although he had nothing in his hand, he was flicking the ash of an imaginary cigarette and stubbing it out."

Incredibly, Montgomery's so-called "friend" Kingsley Amis (Amis comes out of the Whittle biography as a jealous backbiter in my view) declared himself baffled by what Montgomery saw in Ann, in one letter making what Whittle calls, justly, a "typically ungenerous comment."  Amis, writes Whittle, "thought that someone who had known plenty of attractive film starlets should have had higher standards":


"I say, why's he going to marry that woman with all the teeth, eh?" (this in a letter to poet Philip Larkin, another Montgomery friend).


Fortunately "the woman with all the teeth" shepherded the rapidly declining Montgomery into finally completing The Glimpses of the Moon.  Was it worth waiting a quarter century for?  Personally, I find it a weak book, a succession of sometimes forced comic vignettes strung together by a frayed murder mystery plot; yet it is nice to see Gervase Fen back in a novel again for one last time, in a bucolic setting and confronting some whimsically oddball characters and situations.

All the emphasis in Glimpses on misplaced body parts in rural surroundings suggests that Montgomery had been reacquainting himself with the works of a fellow Detection Club member he had enjoyed as a student back in the 1940s, Gladys Mitchell (then approaching eighty), particularly her joyously macabre second tale, The Mystery of a Butcher's Shop (1929).  Gladys Mitchell also was a favorite, incidentally, of Philip Larkin.

Montgomery bemoans modernization throughout the novel, condemning both the invasion of the countryside by the "South Western Electricity Board [SWEB]" (particularity as manifested in the form of a huge menacingly vibrating pylon--see the dust jacket--known locally, even to little old genteel ladies of the neighborhood, as "The Pisser") and omnipresent television jingles, which evidently have taken over the brain of the seemingly rather simple-minded local Major, who incessantly repeats them.

Whatever one thinks of The Glimpses of the Moon, Montgomery had other creative accomplishments in his generally unaccomplished later years (those past the age of forty).  He edited notable anthologies of both detective and science fiction, contributing as well significant prefaces.  Whittle's Appendix One, "Montgomery and Detective Fiction," profitably examines Montgomery's views of crime fiction.

Although in his own genre writing Montgomery's comic exuberance could overwhelm his commitment to fair play detection (who really cares about the formal puzzle plot in The Moving Toyshop?), as a critic of the genre, "Edmund Crispin" was a passionate and articulate defender of the traditional fair play form, often taking issue with his friend, the crime novelist and critic Julian Symons, who advocated the superiority of the literary "crime novel" over the puzzle-oriented "detective story."

"I'm also faintly discouraged because the 'better' reviewers over here all seem to be highly contemptuous of orthodox detective fiction nowadays," Montgomery wrote the great American crime fiction critic Anthony Boucher in 1960.  "None the less, I'm convinced that there's still a large public for that kind of thing, as opposed to sub-Chandler thrillers, realistic stodge about police routine, or spineless pseudo-profound guesses at criminal psychology; so I shall push on regardless."


"There is no one whose encouragement and criticism has meant more to me than yours (the more so because of my great respect for you as a writer)....You have been kind to me from the beginning and it was your generous review of 'Shroud for a Nightingale' which gave me the breakthrough I needed and which seemed so long in coming" (P. D. James, 1977)

"[Y]our two reviews, so generous and enthusiastic, have made me really happy and give me a confidence I sometimes lack." (Ruth Rendell, 1970)

Montgomery was generous to and supportive of other writers (he was also very supportive of Julian Symons' seminal genre study Bloody Murder, even though he disagreed with much of it), yet he bemoaned the path British mystery fiction was taking in moving away from the the detective story and toward the crime novel.  The original idea of the Detection Club, he noted in 1976, had been to get mystery writers "to stop propounding imbecile plots in appalling English" in the manner of the Edgar Wallace/Sapper school of crime fiction; now, rather mortifyingly, the body in his view had become "to all intents and purposes, a thriller-writers' Club."  Despite his concerns about the direction it was talking, however, Montgomery never resigned from the Detection Club, though he did just that--resign--when the Crime Writers' Association in 1976 awarded its coveted Gold Dagger to Nicholas Meyer's The Seven Percent Solution, a book he deemed "a preposterous and inept pastiche."


It was at a Detection Club dinner in 1977 that Montgomery's mystery writing friends saw a "clearly very ill and...much reduced figure" of a man.  "His neck was so thin that it was not touching the collar of his shirt, and his voice was so weak that only those close to him could hear what he said," writes Whittle, paraphrasing a 1992 letter form Julian Symons.  At the time, crime writer Josephine Bell (an octogenarian who had begun writing detective fiction back in the 1930s), wrote Ann Montgomery worriedly that at the dinner she had found Bruce "woefully changed."  Bell was right to worry.  Within a year Bruce Montgomery was dead (not from liver failure as many suspected, but from heart failure, the latter organ being unable to withstand the stress of needed surgery on his body).

Certainly the later years of Bruce Montgomery tell a sad tale, but they were not years entirely bereft of accomplishment.  Nor can anything detract from the glittering successes that Montgomery enjoyed in the 1940s and the 1950s with his detective novels and films scores.  Concerning the detective novel, "Edmund Crispin" wrote several delightful and enduring genre classics that will continue to be remembered in the decades to come.  As should be David Whittle's biography, a fine tribute to an accomplished and interesting man.

Posted by The Passing Tramp at 6:28 PM