The Reader Recommendeth: In Praise of John Rhode's The Fourth Bomb (1942) 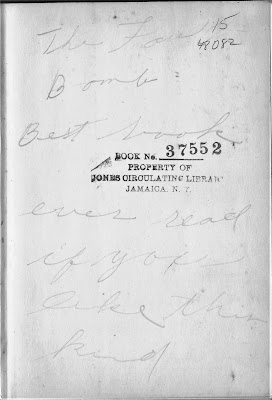 This praise, arranged rather like a Japanese haiku or modern English poem, was written in pencil at some point on the front endpaper of my copy of the American edition of John Rhode's detective novel The Fourth Bomb, reviewed in my last post.

Stamped on the endpaper is

PROPERTY OF THE JONES CIRCULATING LIBRARY

Jamaica is a neighborhood of the borough of Queens on Long Island.  I don't know what the Jones Circulating Library was.  (Perhaps someone could enlighten me.)

On the book's back endpaper in pen is written 1/7/42--perhaps the date the book, which was published in January 1942, was received at the library?  Evidently, this eager, mystery fancying patron was so enraptured by The Fourth Bomb that he (she?) couldn't forbear writing his opinion of the book on the endpaper.  I interpret it as a statement that the mystery is the "best book ever" followed by an injunction to "read if you like this kind'--i.e. mysteries, or traditional English mysteries.  Or did he mean it was the "best book [I] ever read--if you like this kind"?

Either way, the infamous naysaying of Raymond Chandler and Edmund Wilson aside, there have long been many Americans, male and female, of the Anglophile persuasion who felt just as this reader did.  More on this soon.

Posted by The Passing Tramp at 2:12 PM