The Hitchhiker's Guide to Calamity: The Possible Genesis of Patrick Quentin's Puzzle for Fiends (1946) 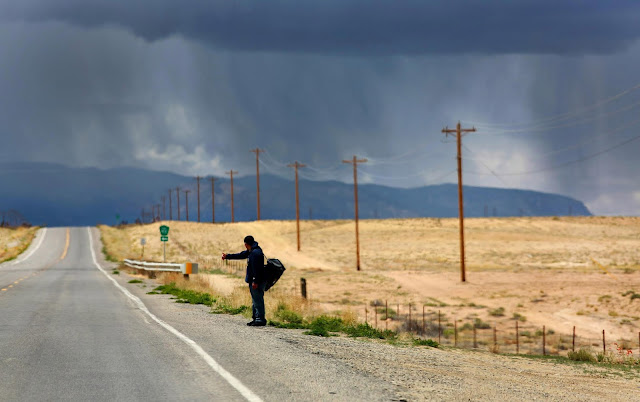 Patrick Quentin's Puzzle for Fiends, the fifth of the author's critically acclaimed Peter Duluth mysteries, is the last in what might be termed PQ's West trilogy, which consists of Puzzle for Puppets (San Francisco, 1944), Puzzle for Wantons (Reno, NV, 1945) and Fiends (Long Beach, CA?, 1946).  It was followed by the PQ Mexico trilogy of Puzzle for Pilgrims (1947), Run to Death (1948) and The Follower (1950) (the last of these non-series).  Not until 1952 with the novel Black Widow would the series get back to New York, site of the first two Patrick Quentins, A Puzzle for Fools (1936) and Puzzle for Players (1938).

PQ authors Rickie Webb and Hugh Wheeler resided together in Reno, Nevada in the fall of 1943 after getting out of the army (Hugh on a medical exemption; I'm not sure what ground Rickie had).  There they awaited the granting of Rickie's divorce from author Frances Winwar, Rickie's bride of six months. For about a year after that, throughout most of 1944, they lived in San Francisco, where they gathered the experience which informed Puzzle for Puppets, published later that year.  Rickie then joined the Red Cross, serving with that organization in Hollandia, New Guinea for about six months in 1945, after American forces drove out the Japanese.  Rickie corresponded with Hugh during this time about the Jonathan Stagge novel Death and the Dear Girls, published late in 1945, but not about Puzzle for Wantons (published a few months before the Stagge), which drew on Rickie and Hugh's Reno experience and likely was completed before Rickie left the country.

Rickie returned to the United States in the summer of '45 and moved into the farmhouse in the Berkshire Mountains of Massachusetts which he and Hugh had purchased at the end of 1944.  There the authors worked on the Stagge novel Death's Old Sweet Song and the PQ novel Puzzle for Fiends.  How much Rickie actually contributed to these books is an open question, but the basic plot of Song, with its serial  killings based on the lyrics of an English folk tune, seems the sort of thing Rickie would have contributed, and the harsher noirish sensibility of Fiends recalls to my mind some of Rickie's Thirties work in the pulps.  It also seems to draw on recent experiences of Rickie's in a number of ways. 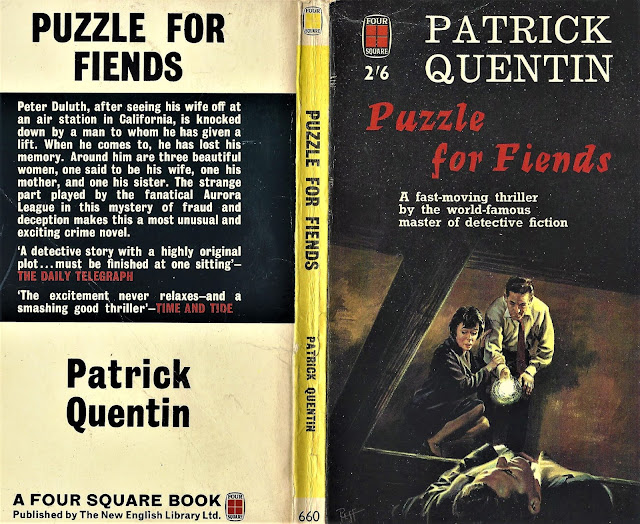 Fiends is unique in the PQ corpus in making use of the amnesia plot, then a popular (and not yet threadbare) device in film and fiction, like Cornell Woolrich's novel The Black Curtain (1941) and Alfred Hitchcock's Spellbound (1945). It's also unusual in having a prologue and an epilogue.  In the prologue Peter--having taken leave at the Burbank airport from Iris, who is off on a USO tour--is heading down the highway to visit his navy buddies in San Diego for a last fling when he picks up a young male hitchhiker.  The next thing he knows he has awakened in a house full of strange women, unable to remember his name or who he is.  Nefarious doings are afoot, but I will leave you to read about them for yourselves.

What I wanted to mention here is that the hitchhiker episode which bookends the tale may have been inspired by a real life murder case which took place in Nevada in 1940, the so-called "one-cent hitchhiker slaying."  I have written about this case in depth in a new article at Crimereads, to which you can follow the link here.  Be warned I discuss both the prologue and epilogue of Puzzle for Fiends, if you haven't read it; however I don't discuss the body of the mystery that comes in between these sections.  The article primarily is about the mysterious male hitchhiker, a major cultural phenomenon of the Depression era and war years, and a nasty murder committed by one of them in 1940.  Check it out if you so choose.

Posted by The Passing Tramp at 2:17 PM