Puzzle for Fugitives: Run to Death (1948), by Patrick Quentin

After the emotional fireworks of the sixth Patrick Quentin Peter Duluth novel, Puzzle for Pilgrims (1947), in which Peter and his estranged wife Iris badly stood in need of a marriage counsellor but were instead confronted by yet another murder (this time in Mexico, where authors Rickie Webb and Hugh Wheeler had recently wintered), things calmed down a bit emotionally in the next Peter Duluth mystery, Run to Death (1948)--though there is still excitement aplenty.  In the novel Peter confronts yet another murder in Mexico and stands is grave peril of his life, yet at least things are on the mend with Iris!

Iris only appears at the very end of the novel, however, after Peter has finally made it safely back from Mexico to New York, which had not been the locus of a PQ mystery novel since Puzzle for Players, way back before the war.  So much might have turned out differently for Rickie and Hugh but for the war, both in their lives and in the PQ novels, more of which, but for the war, would presumably have taken place in New York (like the two Thirties novels and three early Forties novelettes).

Here is a breakdown of the novel settings: 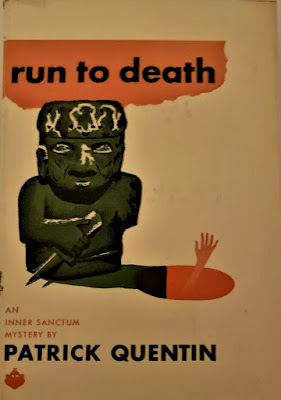 Puzzle for Puppets--San Francisco (all over the city)

Rickie and Hugh's productive 1946-47 winter in Mexico produced not only a trilogy of Patrick Quentin mysteries but the Q. Patrick short story "Love Comes to Miss Lucy," one of the author's most esteemed and  anthologized short works.  Mexico meant a lot to Hugh Wheeler in particular, for reasons I explain in my biography, and this comes out in his writing--for the books in this period were written primarily, if not entirely, by him.  (Black Widow and the Jonathan Stagge mystery The Three Fears, even with its clunky and artificial "three fears" plot device, were written entirely by Hugh and I think The Follower almost certainly was as well.)

In Run to Death Peter has returned to Mexico City to write a play, while Iris has gone off to Hollywood to make a film, their reunion after the events in Puzzle for Pilgrims having proved too painfully tender and awkward to continue unabated.  However, when Peter finishes his play, which is to star Iris naturally, the two of them reconnect in a big way.  When events in the book commence, Peter is to return in ten days to New York to reunite with Iris, who has finished her film, but first he stops off in Yucatan to see some Mayan ruins.  He should have known, given his track record, that there he would encounter not only Mayan ruins but murder!

Interestingly, when the novel was presented to Patrick Quentin's publisher, Simon and Schuster (under its Inner Sanctum Mystery imprint) with the title Puzzle for Fugitives, imprint editor Lee Wright suggested that "Puzzle" be dropped from the title, as it carried a connotation of a traditional, puzzle-oriented detective novel, which was just not the thing publishers wanted in the late Forties, when they were pushing noir, hard-boiled mystery, espionage escapades, and tales of "suspense"--anything but traditional detection!  Thus was the title altered to Run to Death, which certainly was in keeping with the hectic postwar years and the prevalent desire, on the part of publishers if not always readers, for excitement in mysteries rather than methodical elucidation.

Lee Wright also complained that Rickie and Hugh in their new book had essentially ditched Iris Duluth yet again, for the second time in three years.  "Sometime you must tell me why you dislike her so much," Wright pettishly wrote the authors.  My view is that it wasn't so much that Hugh hated Iris, but that Peter and Iris happily together no longer reflected either his and Rickie's reality as a couple or the types of semi-noirish books which Hugh, who now held the writing reins completely in his hands, wanted to do.  Team Iris would have to content themselves with her glorious apotheosis in Puzzle for Wantons (1945), a PQ manners mystery where she steals the sleuth show like some dynamic and delightful diva of detection.  Run to Death has its own charms, however.

In Run to Death Peter during his visit to Yucatan encounters a lovely young blonde, Deborah Brand, who persuades him to drive her out in his rented car to the ruins at Chichen Itza, telling him she missed her tour bus.  On the drive Rickie begins to suspect that the blonde is not being entirely truthful with him and in fact for some reason fears for her life.  When at the ruined Mayan city she fatally falls, ostensibly accidentally, into the sacred cenote--a limestone sinkhole where sacrificial human victims for hundreds of years were thrown--Peter finds himself deliberating the classic murder mystery question, did she fall or was she pushed?

Local authorities decide that Deborah's death was an accident, however, and Peter returns to Mexico, where he finds himself pursued by both a deadly Mexican gunsel whom he dubs Junior--"a pretty little Mexican boy with unknown rancor and a gun"--and a blatantly Russian ex-ballerina with some mysterious agenda of her own, Vera Garcia.  (She married a rich old Mexican.)  Not to mention that he keeps on running into people, ostensibly coincidentally, from the Yucatan tour party.  What do they all want with Peter?  What the heck is going on?

While Run to Death retreats from the murky emotional depths of Puzzle for Pilgrims, it remains an immensely entertaining, fast-paced, action-packed Hitchcockian read (MacGuffin included), with one of those breathless triple twist endings at which the authors in their various guises excelled.  I've read it twice now and enjoyed it immensely both times.  Plus there is an appealing little coda between Peter and Iris at table at their New York apartment which almost feels like a farewell to their readers.

The next PQ novel, The Follower, would not, well, follow for more than two years and when it appeared it turned out to be a non-series work.  Peter and Iris would, however, make a triumphant (if angst-ridden) return in 1952 in Black Window, probably the most successful and critically praised Patrick Quentin novel.  The novel was filmed in glorious, if arguably grandiose, cinemascope in 1954, where Peter and Iris "Denver" were inhabited by actors Van Johnson and Gene Tierney--not a bad representation!  Run to Death should have been filmed as well (as should The Follower have been), but the Mexican locations which are such an important part of the novel probably stymied such ambitions.  Hugh Wheeler would not receive his due in films until he started writing for them directly.

Posted by The Passing Tramp at 5:46 PM