Ronald Knox, his Detective Fiction Decalogue and "The Four Tragedies of Memworth" (1928), by Lord Ernest Hamilton

In Father Ronald Knox's celebrated Golden Age detective fiction "decalogue" the Catholic priest and author of mystery tales propounded ten rules for writing in the genre.  One of the more famous (or infamous) of his rules is number five:

"No Chinaman must figure in the story.  Why this should be so I do not know, unless we can find a reason for it in our western habit of assuming  that the Celestial is over-equipped in the matter of brains, and under-equipped in the matter of morals.  I only offer it as a fact of observation that, if you are turning over the pages of a book and come across some mention of 'the slit-like eyes of Chin Loo', you had best put it down at once; it is bad.  The only exception which occurs to my mind--there are probably others--is Lord Ernest Hamilton's 'Four Tragedies of Memworth.' "

Father Knox has been rapped over the knuckles, figuratively speaking, for formulating this rule, by critics who have failed to understand that Knox in his droll fashion was attempting to make a serious point: that the mystery thriller or shocker tale and the detective novel were two very different things. Knox himself distinguished between the two mystery forms earlier in his decalogue:

"A detective story must have as its main interest the unraveling of a mystery; a mystery whose elements are clearly presented to the reader at an early stage in the proceedings, and whose nature is such as to arouse curiosity, a curiosity which is gratified at the end.

And here, for my own part, I would draw a very clear line of demarcation between detective stories and 'shockers.'  Shockers are not in the true sense mystery stories at all; they do not arouse a human instinct of curiosity....

We know at once that the woman is an adventuress, probably a quite innocent adventuress who is being compelled by a threat of blackmail to subserve the purposes of villains; that there is a gang of international crooks at work, determined to put an end to the peace of Europe by giving away English state secrets to an unknown foreign power.  We are certain beforehand that the motives of the villains will be entirely inhuman, the actions of the hero and heroine rash to the verge of idiocy; that the complications to which we are introduced at the beginning will not be explained at the end, because by that time the reader will have forgotten all about them, and probably the author as well.  All this is not a detective story."

In advocating banishing the "Chinaman" from the true detective novel, Ronald Knox had in mind the silly and offensive racist caricatures most prominently associated with the novels of Sax Rohmer (creator of the "fiendish Oriental mastermind," Dr. Fu Manchu), but also figuring in numerous other English and American mystery thrillers throughout the 1920s and 1930s, including some by thriller king Edgar Wallace, the bestselling novelist in England in the 1920s and early 1930s.


Father Knox's Chinaman rule has been much discussed over the decades, but, interestingly, little or perhaps even no mention has been made of Knox's clearly stated exception to the Chinaman rule: Lord Ernest Hamilton's 1928 mystery novel, The Four Tragedies of Memworth.  What is this novel and why is its prominent Asian character an acceptable violation of Knox's rule?  All will be revealed by the Passing Tramp in Parts Two and Three of this review essay! (for more on Ronald Knox, see ronaldknoxsociety.com/index.html )

Special note from the Passing Tramp: It's been a month now with this blog and it has had nearly 4000 visits, from around the world.  Thanks very much for those visits.  I hope my posts have been of interest and I will try to keep it that way. 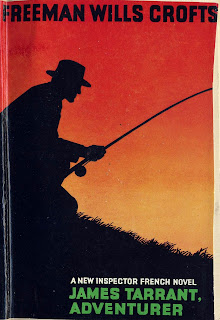 Posted by The Passing Tramp at 9:35 PM