Masters of the "Humdrum" Mystery 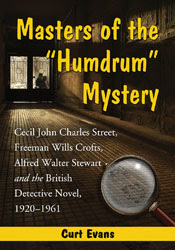 For Symons, this title was not meant to be a complimentary one.  Symons used the term as as a way of dismissing English detection authors he saw as tedious and dull writers, focused entirely on the construction of "mere puzzles," rather than deeper explorations of theme and character (as Symons felt he was doing himself in his own crime writing, with such pathbreaking novels as The Thirty-First of February and The Colour of Murder).

When some dozen years later he came to write his seminal study of crime fiction, Bloody Murder, Julian Symons argued that there was an entire "Humdrum school" of British detective novelists, headed by Crofts and Rhode but also including other writers, such as the husband and wife team of G. D. H. and Margaret Cole.  At other times he included such writers as J. J. Connington (Alfred Walter Stewart), Henry Wade (Henry Lancelot Aubrey-Fletcher), E. R. Punshon, R. A. J. Walling, J. S. Fletcher, Gladys Mitchell and Arthur Upfield on his Humdrums list.

Some of these inclusions are to my mind unwarranted (whatever Gladys Mitchell may have been, for example, she wasn't "Humdrum," certainly not during the Golden Age, and Henry Wade is grossly underappreciated as a  literary stylist), but I dislike the entire assumption behind the use of the term "Humdrum": that writing puzzles, "mere puzzles" as they so often are smugly called, is an inferior literary art.  This is the sort of literary snobbery that Agatha Christie, the greatest puzzler of them all, frequently has been subjected to over the years.  I believe that constructing  a good mystery puzzle is a darn hard thing to do!

I wrote my new book, Masters of the "Humdrum" Mystery: Cecil John Charles Street, Freeman Wills Crofts, Alfred Walter Stewart and the British Detective Novel, 1920-1961 (to be published by McFarland Press in June 2012) in part to give a long overdue reappraisal of these "Humdrum" detection writers as accomplished literary artists.  Not only did they produce a goodly number of fine fair play puzzles, but their clever tales have more intrinsic interest as social documents and even sometimes as literary novels than they have been credited with having.

Too often today is the Golden Age of British mystery writing defined exclusively by the four British Crime Queens: Agatha Christie, Dorothy L. Sayers, Margery Allingham and Ngaio Marsh.  While these talented and beloved women crime writers are of great importance to the study of the period, they should not be treated as the period's sole representatives.  As my study shows, the Humdrums were distinctive writers in their own right, actually quite distinguishable from their accomplished sisters in  crime.  They were, in fact, their own men.

My hope is that Masters of the "Humdrum" Mystery will entertain and inform readers but also provide us all with a fuller understanding of the history of the mystery genre during its Golden Age and its aftermath.

Link to McFarland's Masters of the "Humdrum" Mystery page: