Carolyn Wells's detective novels take place not in mean streets but, typically, country mansions and luxury apartments.  (Lots of Venetian vases in this dame's vicinity, if you know what I mean!  You gotta watch your step or you're gonna break somethin' that'll set you back some g's, I'm tellin' ya.)

Yet this really is the life that Carolyn Wells knew, and she wrote it.

Born in 1862, Carolyn Wells grew up in privileged circumstances in Rahway, New Jersey and was still living at home with her father, mother and sister, Ida, at the turn of the century, when in her late 30's she started to attain success as a writer of nonsense and children's books.

Ida Wells died in 1902 and her father passed away at the age of 75 four years later, but Carolyn remained at home with her mother until 1918, when at the age of 55 she wed a friend of some years standing, 62-year-old widower William Hadwin Houghton, a relation of the publishing Houghtons and an executive in Valentine & Co., a large paint and varnish company. (Valentine was the parent of Valspar, a subsidiary of Sherwin-Williams.)

The onetime Paris representative of the company and a supporter of women's suffrage going back to the 1890s, Houghton was a longtime member of a social circle in New York that included numerous literary types.  Carolyn's marriage to Houghton ushered in the happiest time of her life, but it was sadly short-lived.  Houghton died the next year, after just a year and seven months of marriage. In Rahway Carolyn's mother also died in 1919, an ill-starred year all over the world.

Bereft of intimates, Carolyn Wells remained in her and Houghton's apartment at the recently erected and rather swanky Hotel des Artistes (overlooking Central Park), residing with her recently hired maid-companion, Bridget Mary O'Connell, and a cook.  The presumably Irish Catholic Bridget proved useful indeed to Carolyn, who once claimed, one hopes facetiously, that she declined to attend college because she didn't want to have to make her own bed.

"She loves to clean silver, make sandwiches and dust books," Carolyn wrote of industrious Bridget.  "She attends to accounts and does errands better than I could myself."  The highly useful Bridget was to remain with Carolyn until her mistress' death in 1942, when she reaped a considerable windfall as the principal legatee in Carolyn's will.

During the 23 years of her life that spanned from Houghton's death to her own, Carolyn penned nearly 70 detective novels, most of them tales of the exploits of her great detective Fleming Stone, one of the blandest, though best-known, fictional sleuths in between-the-wars America.  These tales almost invariably take place among millionaire sets in sprawling country homes in New England or tony townhouses in New York, with occasional trips to the shore in New Jersey.

Dashiell Hammett and other Wells critics scoffed at the artificiality of her settings, but throughout the Twenties and Thirties Carolyn Wells remained one of the most popular mystery writers in America, one of the comparative few who accumulated a fortune through her fiction.

The author was a member of the Colony Club, a social organization of New York's elite women founded by Florence Jaffray Harriman, and she was a friend not only of inventor Thomas Edison (her brother, William Farrington Wells, was a Rutgers-educated electrical engineer who became vice-president and general manager of the Edison Electric Illuminating Company of Brooklyn), but of Republican presidents Theodore Roosevelt and Herbert Hoover.

To the latter man, then the newly-elected American president, Carolyn dedicated one of her detective novels, The Tapestry Room Murder (1929).  (Like Woodrow Wilson, Hoover was a detective fiction fan, showing that love for the stuff knows no political boundaries.)  Wealthy inventors also pop up in her mysteries.  When it came to the rich and privileged people of the northeastern United States, Carolyn knew her stuff.

Carolyn dedicated a 1925 detective novel, The Daughter of the House (recently reviewed here), to Eleanor Brush Hempstead, the 53-year-old daughter of John T. Brush, millionaire owner of the New York Giants baseball franchise.  My particular copy of this novel was once owned by Katherine Richards Gordon (1864-1951), the one-eighth native American daughter of the Irish co-founder of the first bank in St. Paul, Minnesota. Her maternal great-grandfather was a prominent Minnesota fur trader who married a half-blood Ojibwe, or Chippewa.

Coming from a highly musical family, Katherine Richards Gordon was an accomplished pianist and vocalist, but she gave up a career when in 1905 she married Chicago, Milwaukee and St. Paul Railroad executive George Barton French.  GB French was also a scientific researcher, and in his later years he retired from the railroad business to devote himself to experimental research.  He gave much effort to improving hearing aid technology, in 1930 writing in the Scientific American:

No effort seems to have made to date to provide hard-of-hearing public schools pupils with an efficient mechanical hearing aid at a reasonable price to enable them to receive the benefit of education and also the benefit of the companionship of their fellow pupils.  These children are not only embarrassed during their training period, but the affliction, uncared for, will increase with advancing years and interfere to a large extent with their ability in later years to earn a comfortable livelihood....

Surveys show that there are in excess of ten million people in the United States with defective hearing, including three million school pupils in need of treatment and efficient hearing aid to enable them to keep up with their classes.

One of those people suffering from defective hearing was Carolyn Wells, who over the years became increasingly deaf after being struck with scarlet fever as a child.  (The same epidemic killed one of her sisters.)  Clearly this was another connection between Carolyn and the Frenches. 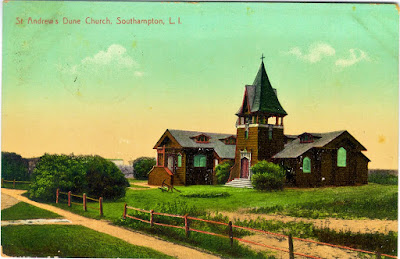 In Southampton, Long Island, George and Katherine French maintained a summer residence, Darena, described as a "gorgeous shingle style home, with a gambrel roof whose proportions should be studied by all the speculative home builders on the East End, dormers with sunburst patterned trimwork, third story eyebrow windows and extensive porches."

Darena was built around the turn of the century and purchased by George French in 1914.  It reminds me of Carolyn's description of her own family home in "gay and airy" Rahway, with its "broad lawns, big trees, flower gardens and pleasant verandas."

The Frenches were highly active in Southampton society until George's death in 1937.  For many years Katherine French was choirmaster and organist at St. Andrews Dune Church in Southampton, a shingled beauty erected in 1879.

Perhaps this gives some idea of Carolyn Wells's standing during her life and illustrates that, like other writers, she probably followed the motto of write what you know, at least as far as social milieu goes.
Posted by The Passing Tramp at 1:57 AM