Murder of the Publisher: Who Killed Claude Kendall?

On Thanksgiving Day, November 25, 1937, former publisher Claude H. Kendall (1890-1937) was found beaten to death in his room on the eighth floor of the Madison Hotel, at 21 East 27th Street, near Madison Avenue (this is the narrow, mansard-roofed structure on the left side of the photograph to the right).

Around 11:00 a.m. a maid discovered Kendall dead on the floor, a bed sheet wrapped loosely around his neck. Kendall had a black eye, lacerations on the lips, a swollen jaw, hemorrhages on the head and body and lacerations below the knees, the latter probably caused from kicking.

An inebriated Kendall had been put to bed in his room by two friends shortly after midnight.

However, Kendall later emerged from his room and went down to the hotel restaurant, where he joined "a slightly built youthful white man." This other man was "a familiar figure in the Madison Square district where Kendall lived."

Kendall returned with this man to his, Kendall's, room around 3:30 a.m., according to the hotel elevator operator.  About a half-hour later, a tenant on the floor above, a writer, heard noises in Kendall's room like thumping on a heating pipe.  These thumps continued at intervals for half an hour.

When he was found dead later that day, Kendall, apparently a lifelong bachelor whom other tenants described as "a quiet man," had no money in his room.

This is all I have discovered about this real-life murder so far.  Two days after the murder, the New York police predicted a quick arrest, but I have not yet found a news report of one.

Claude Kendall was born in 1890 in Watertown, New York, located in the northwestern part of the state near Lake Ontario.  Kendall's brother Clarence was business manager of the Watertown Daily Times, still in circulation today.  Claude Kendall had left Watertown for New York City around 1910, joining an investment firm.  He also studied for two years at New York University before serving in the navy during the Great War.

In 1929 he started a publishing firm, Claude Kendall, Inc. Between 1934 and 1936, he went into publishing partnership with William Willoughby Sharp (1900-1955), a former stockbroker, and the firm's name was changed to Claude Kendall and Willoughby Sharp, Inc.  In 1936, the wealthy Sharp seems to have left the firm, and it went bankrupt.  After he was murdered the next year, Kendall was reported to have been employed in the last year of his life a "salesman in a publishing house." 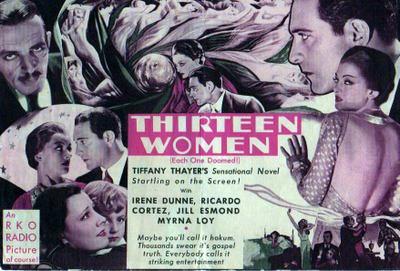 Claude Kendall had a sad fate, but at least he enjoyed some notable years as an independent publisher.  Probably his firm is best known for publishing two popular crime novels of a sort by Tiffany Ellsworth Thayer (1902-1959), Thirteen Men and, naturally enough, Thirteen Women (the latter book was made into a film thriller starring Myrna Loy).  He also published a small number of detective novels, including two written by his publishing partner Willoughby Sharp.  I will be talking about some of these books over the next few weeks.
Posted by The Passing Tramp at 6:25 PM