Among many other things, Ed McBain (1926-2005) is known as one of the key figures in the development of the police procedural subgenre of crime fiction, where emphasis is on the realistic depiction of crime investigation by police.

The 1950s was a great decade for police procedurals.  In England, there was John Creasey (1908-1973), who under the pseudonym J. J. Marric introduced his Superintendent Gideon series in 1955.  In the United States, Ed McBain launched his long-running 87th Precinct series the next year, with Cop Hater (1956).  The series ran for a half century, only ending when its creator passed away in 2005.

If it's hardly true that before the 1950s "the classic British mystery seemed to take place entirely in the drawing room of a stately country manor and the classic American one involved a hard-boiled private eye working entirely on his own" (it only seems this way if one has shuttered vision and erroneously limits the definition of classic), certainly the police procedural sub-genre received tremendous impetus in the 1950s from the skilled and restless hands of Ed McBain. 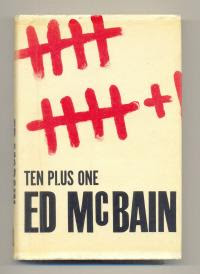 So many people already have blogged about McBain's work (perhaps most notably, there is an ongoing series devoted to his 87th Precinct books at Tipping My Fedora).

Coincidentally, this is the first Ed McBain novel that I read, many, many years after Deon Meyer, who writes about Ten Plus One in Books To Die For ("I bought it at Don's Book Exchange for seventy cents in 1976, when I was eighteen years old," recalls Meyer, "a Pan paperback, now falling apart").

Of Ten Plus One Deon Meyer writes: "It is my favorite crime novel of all time."  While I wouldn't go that far in my own case, I did find Ten Plus One a superlative example of a series crime novel.  I will be going into more detail, in Part Two, tomorrow, so by all means check back.
Posted by The Passing Tramp at 2:51 PM