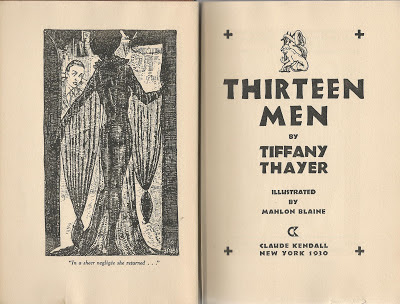 This is an unusual book, and I haven't completed it yet, to be honest, so the full review piece will be coming later!  I've nearly finished a 6000+word piece on Willoughby Sharp, which will serve as the introduction to the the forthcoming new editions of his two detective novels, Murder in Bermuda (1933) and Murder of the Honest Broker (1934).

But back to Mr. Thayer's first novel!  Surprisingly, given Thayer's popularity in the 1930s (which provoked the ire of F. Scott Fitzgerald and Dorothy Parker), not a great deal seems to be available about him on the net.

The frontispiece to Thirteen Men suggests one source of Thayer's popularity: there is some salacious (by 1930s standards, anyway) sexual detail. There are other sources too, however.

Some of his work has criminous elements that put it at least on the borderland of crime fiction.  Thirteen Men somewhat resembles the classic jury mystery subgenre: you know, the type of mystery that takes place during a murder trial and focuses on the deliberations of the jury.

Raymond Postgate's Verdict of Twelve (1940) is probably the best known of this type of book from the Golden Age today, though in fact that were two other novels, both titled The Jury, by Eden Phillpotts and Gerald Bullett, that preceded it (published in 1927 and 1935, respectively; both are recommended).

The thirteen men of Thayer's book are a confessed serial murderer (he has admitted to shooting 39 people in several different cities) and the twelve people serving on the jury at his trial.  A chapter is devoted to each man, plus there's an opening chapter detailing the horrible events in the killer's crime wave.  The murders, which include the slayings of some children, are really rather grisly.

The chapters devoted to the jurors are character studies, each ending with the particular man getting the summons to jury duty.  These so far are well done, but I'm wondering where it all leads.  Are there any surprises in the final chapter?  What was the killer's motive?  Is he really the killer?  Is he found guilty?  I'm looking forward to finding out!
Posted by The Passing Tramp at 2:41 AM