Up Hill and Down Dale: A Review of Kenneth Ashley's Death of a Curate (1932)

Kenneth Herbert Ashley's (1887-) is an obscure literary figure from the Golden Age of the detective novel. He has a Wikipedia entry, but it is quite brief, stating that Ashley "was an English poet, novelist, journalist, and farmer" who in the 1920s published the poetry collection Up Hill and Down Dale (1924) and the novel Creighton the Admirable (1925) and poems in The London Mercury, The Spectator and The Nation and Athenaeum.

Ashley's sole detective novel--apparently his last substantive published work of any kind--was published in 1932 by The Bodley Head (a firm whose great distinction was publishing the first detective novels of Agatha Christie, though they were too parsimonious to keep her with them).

At this time, Ashley was 45 years old.  What happened to him after that, I have no idea.

I managed to find an inscribed copy of Up Hill and Down Dale, which Ashley with charming self-deprecation dedicated to

THE FOUR PEOPLE
who will read this book

Tell me about it, brother!  If only you'd written poems about vampires rather than farmers, you might have hit the big time.

In his dedication Ashley was quite modest, because as I mentioned previously,  J. B. Priestley was one individual who owned and read Up Hill and Down Dale. The prominent English poet and novelist L. A. G. Strong also took note of Ashley, including Ashley's poem "Rudkin" in his collection of the best poems of 1923.  "Rudkin" is a beautifully composed rustic portrait:

Rudkin was one who cattle sold,
Laughed loud, talked bold;
Children got, drank at inns,
Nor thought much of his sins.

This goes on for two dozen more lines, all delightfully evocative of the man.

Ashley was much concerned with the decline of rural England in the 1920s and the plight of the jobless (farm hands and colliers alike), as we saw in a previous post, wherein I quoted Ashley's poem "Out of Work."

There's powerful sense of authenticity in Ashley's poetry, and this sense comes through as well in his sole detective novel, Death of a Curate.  The novel details the investigation into the death of young Wilfrid Ernest Whatmough, curate at the northern England village of Church Linton, who is found, fatally bludgeoned, one morning just outside the door of his modest cottage.

Ashley stages a substantive murder investigation, which eventually narrows the field of suspicion to three individuals, but what is most interesting about the novel is the setting and the characters. People looking for country houses and brilliant, aristocratic amateur detectives will be disappointeded with Death of this Curate.

Instead of the privileged and the posh we get a raft of more humble, and also more believable, characters:

D. I. Dawes and P. C. Robinson, nicely nuanced English cops; the village "natural" (i.e., feebleminded) Tom Bentley; the hard-pressed Farmer Ashworth ("Charlie Ashworth, though a farmer, was no bucolic figure; at least his thin, rather undersized physicality and hatchet face would not have met the requirements of such superficial characterisation fifty or so years ago.  Yet he was typical enough of many farmers today."); Nelly, Ashworth's current housekeeper and bed partner ("If he'd ha' married every lass he ought to ha' married, he'd ha' had as many wives as King Solomon by now."); Inspector Dawes' Aunt Sarah, the village postmistress with a keen nose for news (a splendid Miss Marple type character, though not she is not of Miss Marple's social class, having been in service once upon a time); and others. 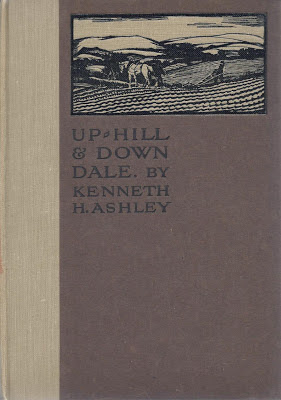 With the descriptive skill of an able poet and a fine ear for dialect speech, Ashley makes his settings and characters in Death of a Curate superbly real.  I don't believe I have read a Golden Age detective novel with such carefully calibrated dialect speech and there also are some memorable lines from the author ("It is so much easier, in these bureaucratic days, to draw a salary than make a living").  With an engrossing plot as well, Death of a Curate is a real winner from the 1930s.  Unfortunately, it's just the sort of novel that has gotten written out of histories of the British Golden Age of detection, which so intently focus on the country house strain.  Yet the period was much more varied than these genre histories suggest, a fact to which Curate attests.

Currently Death of a Curate cannot be reprinted, because apparently no one knows anything about Kenneth Ashley after 1932 (oh! the vagaries of copyright law).  Let's hope this changes, allowing this extremely rare book to become available again, after more than eighty years, to devoted fans of classic English mystery.
Posted by The Passing Tramp at 6:16 PM