The Controversies of Claude Kendall, Publisher

No further word on the seemingly unsolved murder of Claude Kendall, but I thought I would write some on Kendall's career as a publisher, pending a Friday piece on the two Willoughby Sharp detective novels Kendall published, in 1933 and 1934.

From the beginning Claude Kendall seems to have been something of a controversialist, looking for books to publish that might create a stir.  Kendall's first published book was Kanhayalal Gauba's Uncle Sham: The Strange Tale of a Civilization Run Amok (1929), a scathingly critical study of the United States, written in response to Katherine Mayo's scathingly critical study of India, Mother India (1927).  When review copies of Uncle Sham were sent to the United States from India, where it was originally published, the United States Customs Service seized the copies, having deemed the book obscene (Gauba spends much time disparaging American sexual mores).

After Kendall successfully published an American edition of Uncle Sham (the obscenity determination didn't stick), it was announced the next year that Aaron Sussman, an ad man and book designer, had gone into partnership with Kendall (though the title of the firm remained Claude Kendall, Inc).

The first book the two men published was Freak Show, a collection of short stories by Russian writer Andre Sobol.  The next book was Tiffany Thayer's Thirteen Men, a titillating tale about the trial of a mass murderer. It was a tremendous commercial success, seeing thirteen printings between May 1930 and June 1931.

Altogether Claude Kendall published four Tiffany Thayer novels, Thirteen Men, Call Her Savage, Thirteen Women and An American Girl.  The first three of these novels had sold over 387,000 copies by February 1933, but, unfortunately for Kendall, Thayer left him for greener publishing pastures.

Kendall had other strings to his bow besides Mr. Thayer's works, however.  In 1931 he published the first American edition of Octave Mirbeau's classic Decadent Movement "exposition of sadism and masochism," Torture Garden ("Tiffany Thayer's Call Her Savage is good enough, if you like them savage," quipped the Virginia Quarterly Review, "and Octave Mirbeau's Torture Garden is for those who want to be tortured").

The same year, Kendall unsuccessfully attempted to secure the American and Canadian rights to James Joyce's Ulysses, anticipating the overturning of its proscription on obscenity grounds (this occurred in 1934).

Other controversial novels published by Kendall in the early 1930s include G. Sheila Denisthorpe's Loveliest of Friends, a lesbian novel, and Frank Walford's Twisted Clay (Take a good look at the illustrations of Twisted Clay.  Needless to say the jacket design is eye-catching, but also note the fine decorative motifs on the book itself). 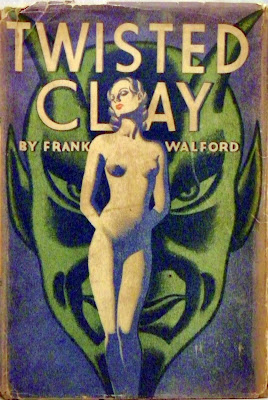 Twisted Clay, which Kendall pointedly announced in the New York press had been banned in Canada, sounds fascinatingly lurid.  The protagonist, Jean Deslines, has been described as a psychopath "whose downward spiral goes from premarital sex and lesbian tendencies to patricide, prostitution, serial murder, drug running, and eventual suicide."  It was banned not only in Canada, but in Australia, Walford's native country, for three decades!

Then there's Cecil De Lenoir's The Hundredth Man: Confessions of a Drug Addict, which was called "an excellent piece of journalistic writing," in the New York Times Book Review.

Kendall did find time to publish some less sensationalistic mystery novels (some of them even Simon Pure detective tales), about which I will be posting in more detail tomorrow!
Posted by The Passing Tramp at 4:34 PM