No that's not a typo in the title!  Willoughby Sharp was scheduled to produce a third detective novel in 1935, The Mystery of the Multiplying Mules.  It would have been the second Sharp novel, after Murder of the Honest Broker, to feature Inspector Bullock.  A short description of the book was actually given in promotional material.

Here is the description:

Maybe we'll get lucky and this will turn up somewhere.  It's odd that it was never published, when they got this far with it.  Interestingly, Kirke Mechem, whose 1936 novel The Strawstack Murder Case (A Frame for Murder) was reprinted by Coachwhip recently, also has a "lost" mystery novel, one that was turned down by his publisher, Dodd, Mead, his son, the composer Kirke Mechem, tells me, because it dealt with "miscegenation" and was then shelved by the author. 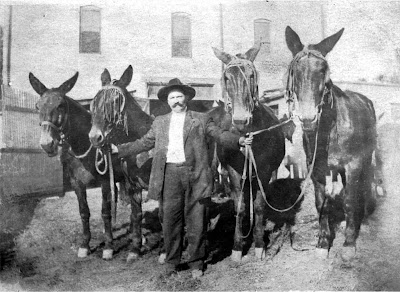 Posted by The Passing Tramp at 1:08 PM