What "Killed" Crispin? The Creative Life and Death of Bruce Montgomery/Edmund Crispin, Part One 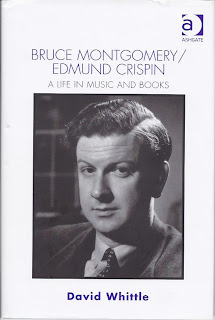 Music composer Bruce Montgomery (1921-1978), who as Edmund Crispin wrote eight glitteringly witty and amusing detective novels between 1944 and 1951 (as well as, with Geoffrey Bush, a fellow composer and the son of detective novelist Christopher Bush, the classic short story "Who Killed Baker?") is the subject of a fine 2007 biography by David Whittle, Director of Music at Leicester Grammar School, Bruce Montgomery/Edmund Crispin: A Life in Music and Books.  Every admirer of Crispin's mystery fiction (and of Montgomery's music) should want to read this biography, but unfortunately affordable copies are hard to find--the publisher, Ashgate, lists it at $124.95.  It took me four years to find a copy I was willing to buy (at $35)!

Whittle's book was $35 well-spent, in my view, for he writes with insight not only about Montgomery's career in music, but also, more pertinently to this blog, the detective fiction that Montgomery wrote under the pseudonym Edmund Crispin.  Whittle chronicles both the impressive rise of this author--he had published eight novels and twenty-one musical compositions by the time he was thirty-two years old--and his sad decline.  Montgomery's productive life both as an author and a composer mostly ended by the time he was forty, as he descended into alcoholism and the stunted life of "an increasingly remote semi-recluse."

To be sure, Montgomery left us the delightful Edmund Crispin detective novels (all still in print today, courtesy of Felony & Mayhem), but once one has read them one cannot help but wish for more and wonder why Montgomery's creative well dried up so comparatively quickly.  P. D. James, born a year before Crispin, has just published, at the age of 91, a new detective novel and she has been publishing them for a half-century now.  After his first eight detective novels, Montgomery managed only one additional mystery tale, The Glimpses of the Moon (1977), before his untimely death at the age of 56. The son of a civil servant who rose to become Principal Clerk in the India Office, Bruce Montgomery with one notable exception had a normal, happy childhood and never lost the conservative, bourgeois mindset produced by his upbringing, despite his Oxford education and penchant for gloriously affected Noel Coward-ish picture poses (see below).

The only unhappiness in his childhood came as the result of a "congenital deformity of the feet" from which he suffered--he was born with his feet turned inward--so that he underwent frequent operations up to the age of fourteen and had during that time to wear calipers up to his shins.  Whittle clearly believes that painful consciousness of his physical imperfection inhibited Crispin from having normal physical relationships with women ("he could not be bothered to do what they required," as Whittle tactfully puts it), though he was attracted by them and frequently enjoyed their company,  Montgomery finally married only a couple of years before his in 1978, when he already was in extremely poor health. 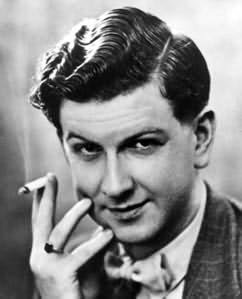 Reading locked room mystery maestro John Dickson Carr's brilliant, shuddery Gideon Fell detective novel The Crooked Hinge, Whittle explains, inspired Montgomery while still a student at Oxford to pen his own mystery tale, The Case of the Gilded Fly, at the tender age (for a published author) of 23.  Also influenced by the donnish detective novelist Michael Innes (and his own surroundings), Montgomery made Gervase Fen, the man who was to become his series detective, Professor of English Language and Literature at Oxford.

Fen quickly became one of the outstanding gentleman amateur detectives of English detective fiction, comfortably rubbing shoulders with the likes of Dorothy L. Sayers' Lord Peter Wimsey and Margery Allingham's Albert Campion.  In contrast with these two Crime Queens (and Ngaio Marsh, whose detective Roderick Alleyn, though a policeman, is of the same breed), Montgomery did not make Fen's love life a focal point, but confined the love stuff to secondary characters, who, Whittle notes, tend, rather ingenuously on the part of the author, to fall in love and decide to get married almost on sight.  Fen himself is not really romantic leading man material (he can be vain, faddish and alarmingly blunt and his most prominent physical feature is his "dark hair, ineffectually plastered down with water," that is "stuck out in spikes from the back of his head"--Holy Disorders).

Love interest is not what distinguishes Edmund Crispin mystery tales, but rather intelligence, humor, narrative zest and--more often, I think, than Whittle recognizes--clever fair play plotting.  Edmund Crispin (let us use this name to discuss Montgomery in his authorial guise) has something of the formidable literary intellect of Michael Innes, yet his humor is earthier, less precious, less an acquired taste.  In my view, Crispin is one of the great comedic writers in English detective fiction. 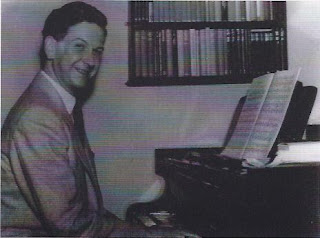 Such is Crispin's penchant for madcap humor that at times the humorous interludes rather overwhelm the mystery plot (this happens most obviously in the two novels that followed Fly, Holy Disorders, 1945, and The Moving Toyshop,1946).  Of the latter, in modern times routinely declared (by Julian Symons and P. D. James for example) Crispin's masterpiece, a reader for Crispin's publisher, Gollancz, presciently noted that it had "a thin plot....but nobody cares."  In the reader's view, Toyshop rose to glory on the wings of its comic "verve."  Most modern readers would agree, though over the years some detection purists, like Jacques Barzun, have dissented.  "Heaven help you if you're expecting detection," noted a querulous contemporary reviewer. 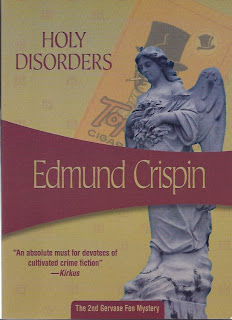 Holy Disorders also amply illustrates this quality of Edmund Crispin's detective fiction (as does publisher Felony & Mayhem's rather brilliant cover design).  Fen does not appear at all in the first third of the tale, the early action mostly being a succession of brilliant comic set pieces as Geoffrey Vintner, Fen's Watson of the moment, attempts to make his way to the cathedral town of Tolnbridge, where misdeeds are afoot.  It seems dark forces are trying to stop him, and he almost immediately is thrown into a hilarious melee in the sports section of a department store (Fen, who has called for Vintner's aid, has mysteriously requested his friend to get him a butterfly net). 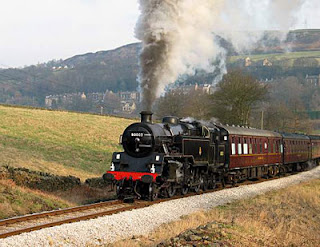 Afterwards, Vintner embarks on a train journey (train journeys in Crispin invariable are delightfully presented), where he meets an assortment of colorful characters, including a psychiatrist who is having a crisis of faith in psychiatry (Crispin's ironic play on the conventional situation of the clergyman losing faith in God), and a vociferous member of the newly energized laboring classes, who demands the right to travel in a first-class carriage ("When we get socialism, see, which is what we're fighting for, see, you and your like will have to show some respect for me, see, instead of treating me like a lot of dirt, see?"--one wonders what the noted leftist Victor Gollancz made of this fellow). 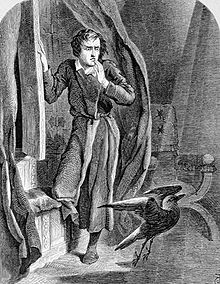 Eventually the mystery plot proper does start to unfold, and an interesting enough plot it is, but probably the highlight of the book is when Fen and Vintner visit one eminent suspect in his home, and find to their bemusement that Poe's poem "The Raven" seems to be materializing before their eyes.  One reviewer deemed Holy Disorders "social comedy with a focus in murder"--which seems a fair enough description! 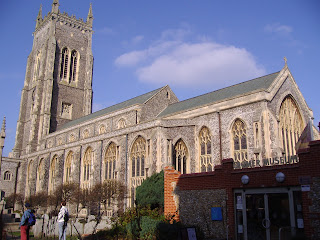 The mysteries from Crispin's middle period--Swan Song (1947), Love Lies Bleeding (1948) and Buried for Pleasure (1948)--are somewhat less humorously harum-scarum than Disorders and Toyshop, as David Whittle notes, and on the whole are more satisfying as detective novels as a result.  In part two of this review article I will discuss middle period Crispin as well as later period Crispin (represented by Frequent Hearses/Sudden Vengeance, 1950, and The Long Divorce, 1951), and also the long silence that reigned over Edmund Crispin's writing life until, near his death, he finally finished one last Gervase Fen tale, The Glimpses of the Moon, in 1977.  David Whittle is particularly illuminating on Crispin's later life, solving the mystery of what extinguished the man's once glorious creative spark.
Posted by The Passing Tramp at 5:23 PM