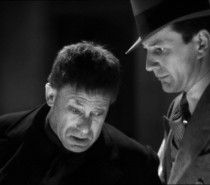 Ah, the passing tramp!  That convenient figure in Golden Age English country house mystery on whom the posh people try to pin the murder of their despised weekend host (the one they themselves all had quite excellent motives for killing).  Who could have slipped in through the French windows and clobbered Sir Ovid Overr-Baring with that bust of Wellington?  Why, it must have been a passing tramp, of course!

One enterprising Golden Age English mystery writer, Jefferson Farjeon (1883-1955), had the originality to make just such a "passing tramp"--a cheeky Cockney fellow named Ben--into one of the era's unlikeliest series detectives.  Ben appeared as the lead character in a series of eight Jefferson Farjeon crime novels, published between 1926 and 1952.  Ben also featured in an early Alfred Hitchcock talkie film, Number 17 (1932), which was based on the hugely popular play by Farjeon of the same title (it was also novelized by Farjeon).

Pictured at the top of this post (and, indeed, at the top of the page) is Leon M. Lion, a popular English actor who played Ben on screen (and on stage).  I much prefer the Ben of Farjeon's books, because over the course of the series Ben develops greater depth than Leon M. Lion's film version, who rather reminds me of Moe of the Three Stooges.  Be that as it may, the dust jacket of Detective Ben (1936), seen below, clearly owes a debt to Mr. Lion. 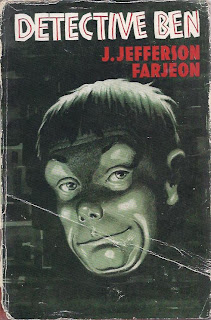 After World War Two, Farjeon revived Ben in two novels he published in 1952, just a few years before his death from cancer. The very last Ben novel, Number 19, likely was conceived by the author as the resilient tramp's last hurrah, its title obviously deliberately recalling the title of the first Ben outing.  The dust jacket of this tale better captures the Ben of the novels, I think (note his worn, split shoe). 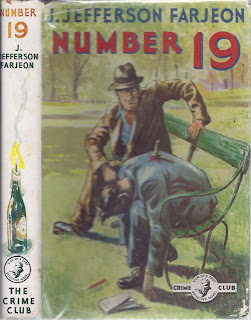 One of the Ben novels was reprinted in 1986 by the Collins Crime Club as part of H. R. F Keating's "Disappearing Detectives" series.  Ben is worth reviving, both for his own intrinsic merit as a character and as evidence that the Golden Age mystery did not always revile the lower classes.  Author Seton Dearden approvingly wrote of Ben that he "is a mixture of Trimalchio and the Old Kent Road, a notable coward, a notable hero, above all a supreme humorist"; while the Saturday Review lauded his "adorable Cockney insouciance and nerve." 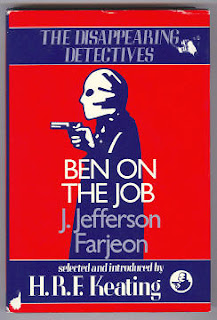 Interestingly, Jefferson Farjeon was a brother of Eleanor Farjeon, the famous children's writer, and a son of Benjamin Farjeon, a Victorian-era novelist who during  a highly prolific writing career produced several worthwhile mystery sensation novels.  The son carried with him something of the father's interest in and empathy for England's poor and downtrodden.