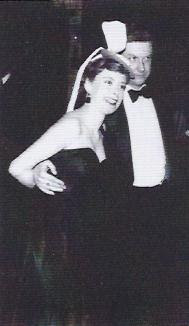 In his biography of Bruce Montgomery/Edmund Crispin, David Whittle argues, correctly I think, that the last two Edmund Crispin books from the 1944 to 1951 series--Frequent Hearses/Sudden Vengeance (1950) and The Long Divorce (1951)--clearly evince the author's "growing regard for plot."  One reviewer of Frequent Hearses, Whittle notes, lamented his own previous castigation of the flippancies in the earlier Crispin detective novels:

I railed against his undergraduate cleverness, but now that [Crispin] writes a straightforward crime story without the sparkling digressions and slapstick repartee of his earlier books, I am sorry, as it were, that I spoke.


While I love the manic high spirits of some of the earlier Crispin tales, I find that Frequent Hearses/Sudden Vengeance and The Long Divorce have more than adequate compensations, namely strong plots ladled with rich dollops of humor  (if not quite of the madcap sort).  Frequent Hearses/Sudden Vengeance has amusing satire of the film world (with which Montgomery had become familiar though his highly lucrative film score work), but my personal favorite of the two is The Long Divorce.  In my 1988 Mysterious Press edition of the book I wrote in the back, upon completing the book on October 8th, 1995 (that was long enough ago that I was younger than Crispin when he wrote it), "absolutely brilliant!"--which I think perhaps gives a hint that I liked it.  On rereading it in 2011 I still do, very much. 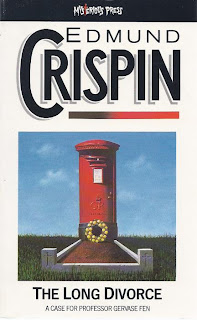 The epigraph to the novel ("the long divorce of steel") comes from Shakespeare's Henry VIII (there's a play you don't see pillaged for quotations every day).  I won't say more about that, but it is quite cleverly worked into the story.  For some reason the epigraph is omitted in the current Felony & Mayhem edition, which otherwise is as attractive and cleverly designed as all their other Crispin editions. 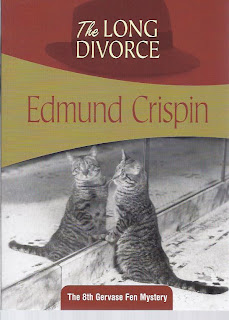 The Long Divorce takes place in 1950, between the dates of Friday, June 2 and Monday, June 5 (at these respective points Gervase Fen is on his way from and on his way to, appropriately enough in a Crispin novel, a train station).  In the guise of "Mr. Datchery" (bonus points if you know this literary reference), Fen is descending on the village of Cotten Abbas to investigate (at local police request) a rash of poison pen letters plaguing the citizenry.  Just this basic set-up should be more than enough to hook the fan of classic English mystery (it certainly hooked me). 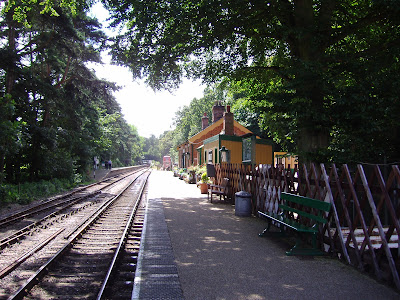 One is right to take the bait Crispin offers with The Long Divorce, because the novel is one of the very best of that ever so enticing literary species, the English village poison pen mystery (probably the best known example is Agatha Christie's The Moving Finger, 1942). 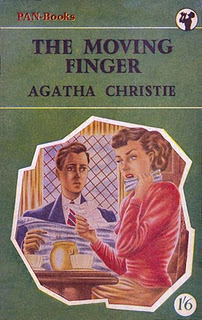 More serious-minded in this novel, Crispin at times casts a sharp, discerning eye over Cotten Abbas and he provides some interesting social commentary on post-war English village life:

Cotten Abbas is sixty or seventy miles from London and obscurely conveys the impression of having strayed there out of a film set.  As with most show-villages, you are apt to feel, when confronted with it, that some impalpable process of embalming is at work, some prophylactic against change and decay which while creditable in itself has yet resulted in a certain degree of stagnation....It all had a prosperous look--but its prosperity, Mr. Datchery thought, was less that of a working class village than that of a village which has been settled by the well-to-do: in a population which could scarcely number more than a couple hundred, it was obviously the invading middle classes that ruled, badly weakened by post-war conditions, but still hanging on.

This sort of keen observation can be found in other 1950s English village detective novels as well, like Agatha Christie's A Murder is Announced and Miles Burton's Bones in the Brickfield (as well as a number of tales by Elizabeth Ferrars, a key figure in the replacement of the classic "country house" mystery with the more modern "country cottage" mystery); but The Long Divorce offers a particularly fine instance of such. 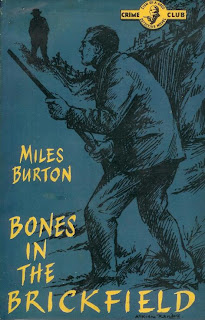 As in Buried for Pleasure, Fen again ensconces himself at an inn and encounters a number of interesting characters.  There's Mr. Rolt, the local saw mill owner looked down on by the village elite for his rough ways and determination to locate his mill at a local beauty spot; Rolt's teenage daughter, Penelope, who talks of the romance of throwing oneself in front of a train and who has a painful crush on an unresponsive local schoolteacher, Peter Rubi, a highly intellectual young man of Swiss derivation; Mr. Mogridge, the gossipy and unctuous local innkeeeper; Helen Downing, an Oxford educated local doctor, relatively newly arrived in the village; George Sims, the established doctor; Inspector Edward Casby, the man tasked with investigating the rash of poison pen letters; Colonel Babington, the Chief Constable, desperately trying to break his smoking habit (like the author at the time); Babington's demented cat, Lavender, constantly on the alert for a Martian invasion (yes, you read that correctly); Amos Weaver, evangelical preacher and local butcher; and assorted female house servants, increasingly scarce and precious beings in post-war England. 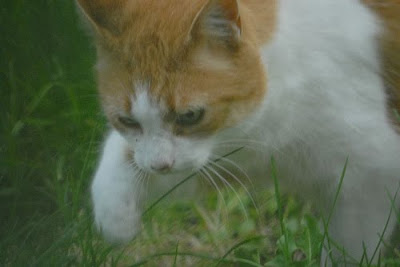 Soon after Fen's arrival, seemingly a poison pen letter induces Helen Downing's wealthy friend, Beatrice Keats-Madderly, to commit suicide.  Following this dire event, a fatal stabbing occurs, of one of the above characters, who seems to have been close to discovering the identity of the author of the poison pen letters.  Much to her distress, Helen Downing becomes a "person of interest" in the investigation, many pieces of evidence seeming to point to her as the source of the village's troubles.

Crispin lavishes attention on the two primary female characters, Helen Downing and Penelope Rolt; and they are treated not flippantly but seriously, with considerable insight and understanding.  Rolt is an attractive and appealing girl, but she is painfully in love and acutely awkward in her feelings.  For her part, Helen Downing is an intelligent and sensitive woman doctor trying to establish herself in a highly traditionalist village (she bears a certain resemblance to Alida Mountwell, a doctor character in Miles Burton's excellent 1943 village mystery, Murder M.D.--though Mountwell is a more confident individual). 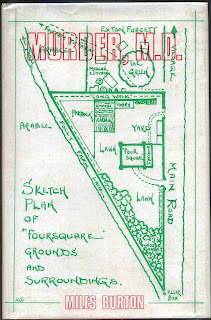 Indeed, with the middle section of the book, Crispin completely shifts the narrative focal point of Divorce from Fen to Downing, sweeping the reader up in Downing's plight, as suspicion starts to focus on her.  This section of the book rather reminds one of psychological suspense novels from the 1950s by such authors as Ursula Curtiss and Margaret Millar.  It is quite effectively done. 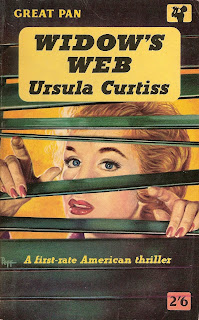 Narrative focus shifts back to Fen for the last part of the novel, where he provides a brilliant exposition of the crime.  Fen's deductions are all based on clues fairly presented to the reader, yet in this reader's case, anyway, a lot of these clues were culpably missed!  When Fen departs Cotten Abbas, the Great Detective has restored order to the English village, in the classic fashion so admired by W. H. Auden in his widely-cited (perhaps over-cited) essay on detective fiction, "The Guilty Vicarage."

In so highly praising the fair play plotting of The Long Divorce, I do not mean to suggest that Crispin eschews humor in the novel.  To the contrary, there are numerous amusing sections.  Lavender's anti-Martian mania is inspired, for example, and Colonel Babington's efforts to quit smoking are quite funny.  Crispin also gets in some droll satirical jabs at Continental intellectuals, in the form of the Swiss educationalist Peter Rubi:

"It is good for the children," [Rubi] observed benevolently, "to destroy things sometimes.  If they are allowed to do that, they grow up to be saner people."  He looked politely to Mr. Datchery [Gervase Fen] in confirmation of his doubtful thesis.  "Is that not so, sir?"
"No," said Mr. Datchery.

In my view, both Fen and his creator unequivocally triumph in The Long Divorce.  It would be something of a last hurrah for both Crispin and Fen.  In the final part of this series, I will look at David Whittle's trenchant analysis of what killed--or at least gravely wounded--Crispin's creative impulse.

Posted by The Passing Tramp at 2:05 PM