The top 1920s authors from this list, accounting for 65% of the titles listed, are:

Looking overall at the Twenties list, we have 24 authors, eighteen men and six women.  Eighteen of the books (45%) come from just two years, 1928 and 1929, suggesting that the quality of the books written in the genre was improving as the decade wore on and indeed that the genre was heading into its most golden years yet, those of the 1930s.

Notable missions include Herbert Adams, Anthony Berkeley, Lynn Brock, A. Fielding, Ronald Knox, Philip Macdonald and Victor Whitechurch; but I am not crazy about Brock and Whitechurch, I have not read enough Adams, and I believe the other four did superior work in the next decade.


1. Agatha Christie, The Mysterious Affair at Styles (1920)
A fine country house mystery that gave the world Hercule Poirot. A bit old-fashioned, but surely one of the strongest debuts in the literature. 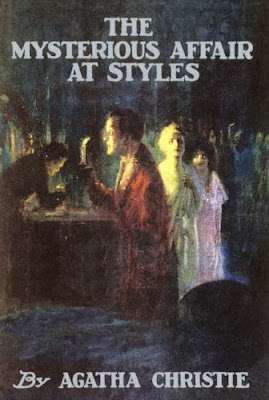 2. Freeman Wills Crofts, The Cask (1920)
Composed roughly the same time as Christie's debut opus but very different in style, this is another significant debut, both for its apotheosis of alibi-busting and its astonishing devotion to material detail. Over-long, as the author himself admitted, but one that should be read.

3. A.A. Milne, The Red House Mystery (1922)
Infamously eviscerated by Raymond Chandler for its sins against literary "realism," this abundantly charming tale is still enjoyable even if one concedes logical faults in the plot structure.

4. Edgar Wallace, The Crimson Circle (1922)
A deservedly once-celebrated tale by the British Golden Age King of the Thriller. This one allows scope for deduction by the reader and clearly influenced the genre. Has a wonderful female character, who would be right at home in a Christie tale, as well as a classic amateur detective.

5. R. Austin Freeman, The Cat’s Eye (1923)
Another thrillerish tale, but still one with plenty of ratiocination by the author’s Great Detective, Dr. Thorndyke.

6. Dorothy L. Sayers, Whose Body? (1923)
Another fine debut. Some may find Great Detective Lord Peter Wimsey too facetious here (and perhaps there and everywhere as well), but the tale is very clever, with a memorable culprit.

7. Freeman Wills Crofts, Inspector French’s Greatest Case (1924)
The debut of Inspector French sees the author moving away from dependence on alibis, but still prolific with clever devices of deception. Too much travelogue and dialect speech, but still a good case, if not the very greatest.

8. A. E. W. Mason, The House of the Arrow (1924)
A major work by an author who contributed only sparingly to mystery. Beautifully written.

9. G. D. H. and Margaret Cole, The Death of a Millionaire (1925)
While flawed in some ways, this tale demonstrates that British Golden Age mystery could be used as a vehicle for leftist-tinged satire.

10. R. Austin Freeman, The Shadow of the Wolf (1925)
Freeman’s most famous inverted mysteries are the tales collected in The Singing Bone and the 1930s novel Mr. Pottermack’s Oversight, but this inverted tale, an expansion of an earlier version, is very good indeed.

11. Eden Phillpotts, A Voice from the Dark (1925)
With a nicely turned hint of the supernatural, this is the best venture into crime and detection in the 1920s by this respected mainstream novelist (and mentor of a sort to Agatha Christie).

12. Anthony Wynne, The Mystery of the Evil Eye (1925)
The debut of Great Detective Dr. Hailey, who later revealed a marked penchant for locked room problems. No such problem here, but a noteworthy entry.

13. Agatha Christie, The Murder of Roger Ackroyd (1926)
Brilliant; one of the landmarks of the genre and the archetypal twenties detective novel.

14. G. D. H. and Margaret Cole, The Blatchington Tangle (1926)
A humorous country house tale, but with more detection than we get in, say, Agatha Christie’s similar (and better-known) The Secret of Chimneys (which was published the previous year).

15. John Rhode, Dr. Priestley’s Quest (1926)
The author’s second Dr. Priestly tale, but more striking than the first in its impressively rigorous application of the principles of logical deduction.

16. & 17. J. J. Connington, Murder in the Maze and Tragedy at Ravensthorpe (both 1927)
Two country house classics from an underappreciated master of the classical form.  In some ways Murder in the Maze is repellent in attitude, yet it is inspired in its central notion (multiple slayings in one of those country house garden hedge mazes) and is told with verve.  Ravensthorpe is a dizzyingly ingenious tale of multiple robberies and murders at yet another country home.  Connington's no-nonsense police detective, Sir Clinton Driffield, presides in both.

18. Freeman Wills Crofts, Inspector French and the Starvel Tragedy (1927)
One of the great original uses of burned bodies, with well-managed shifting of suspicion.

19. Dorothy L. Sayers, Unnatural Death (1927)
Offers a celebrated how? problem and an interesting why? one, plus amusing writing and a very well-observed spinster.

20. Freeman Wills Crofts, The Sea Mystery (1928)
One of the author’s shorter works. Some very clever devices, and characters less stodgy than the norm. It should have been called The Crate, however!

21. Anthony Gilbert, The Murder of Mrs. Davenport (1928)
One of the early detective novels by a prolific author (real name Lucy Beatrice Malleson) who was more comfortable, in my opinion, with mystery than true detection. But this is one of her best efforts at true detection.

22. Robert Gore-Browne, Murder of an M. P.! (1928)
One of two mysteries by a forgotten playwright and mainstream novelist. The second, a thriller, is much inferior. The first, justly praised in A Catalogue of Crime, is a clever tale with detection and a memorable amateur detective.

23. R. Austin Freeman, As a Thief in the Night (1928)
A truly impressive achievment. Though somewhat old-fashioned in tone, the novel boasts good characterization, suspense and fascinating science.  Has rather the flavor of a Victorian sensation novel--one of the good ones--but with greater genuine detection and sound (and ingenious) science.

24. John Rhode, The Murders in Praed Street (1928)
Notable use of a particular plot gambit involving serial murders (the first?). Good opening setting, some good characters and fiendish murders, though Dr. Priestley, Rhode’s Great Detective, is a bit imperceptive on one matter! 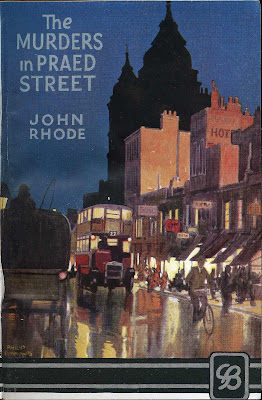 25. Henry Wade, The Missing Partners (1928)
Second genre effort by one of the major figures of the period. More “Croftsian” than later works, but with interesting and original characterization and a good plot.

26. Agatha Christie, The Seven Dials Mystery (1929)
The Crime Queen’s take on an Edgar Wallace thriller, but with  the clever clueing and misdirection of her straight detective novels. Some good humor as well.

27. J. J. Connington, The Case with Nine Solutions (1929)
The Case with Nine Possibilities might have been a more accurate title, but this is a strong, acerbic work, with an interesting situation and fascinating detective case notes at the end.

28. C. H. B. Kitchin, Death of My Aunt (1929)
Once celebrated (and still fairly well-remembered) detective novel by a mainstream novelist successfully aiming at a more realistic treatment of character in a genre novel.

29. & 30. Gladys Mitchell, Speedy Death and The Mystery of a Butcher’s Shop (both 1929)
An impressive one-two debut punch by a truly unique mystery writer. The first, a country house tale, is original in myriad ways. So is the second, though for many it may be too farcical and bizarre. Both have Mrs. Bradley, one of the great women detectives--scratch that--great detectives, period.

31. E. R. Punshon, The Unexpected Legacy (1929)
First of five Inspector Carter and Sergeant Bell mysteries by a longtime mainstream novelist who had written mystery before but not really detection. There is detection here, though the author would produce better examples of it later. What appeals most are his two police detectives, who are amusing and very original for the period.

32. E (dward) J. Millward, The Copper Bottle (1929)
An impressive murder tale (with one of the best endpaper maps ever), by an author about whom I know little, beyond his full first name and that, after some delay, he also wrote three additional genre novels: The House of Wraith (1935); The Body Lies (1936); and The Aero Clubs Mystery (1939).

33. & 34. John Rhode, The Davidson Case and The House on Tollard Ridge (both 1929)
The first novel boasts one of the most complex plots of the decade, the second pleasingly adult characters, a spooky house and some neat gadgets. Both have the brilliant Dr. Priestley. 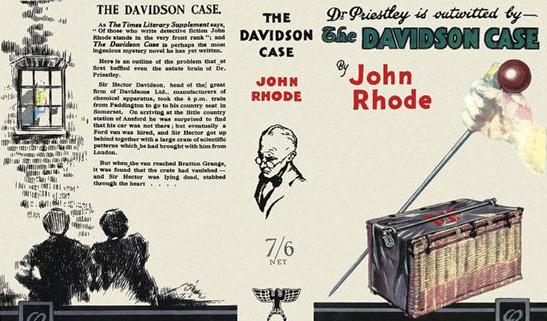 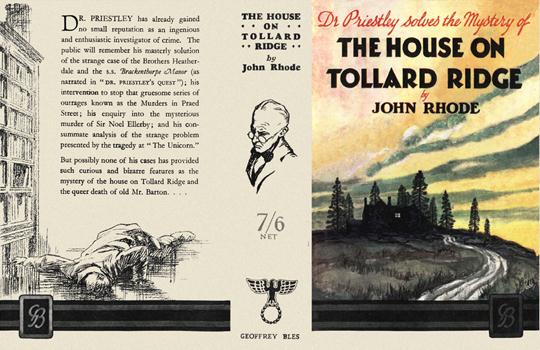 35. P[eter] R[edcliffe] Shore, The Bolt
A strong village tale written under a male pseudonym by Helen Madeline Leys (1892-1965).  Besides authoring a classic supernatural story collection, Randalls Round, she published a second mystery, The Death Film, in 1932. Of this later book a review states: “It consists of detection, and more detection, and then some, and it was all needed. Straight investigation of crooked involution can hardly be better done.” For the story behind this author, see http://bearalley.blogspot.com/2010/10/p-r-shore.html  Reviews are found at http://mysteryfile.com/blog/?p=5221 and http://prettysinister.blogspot.com/2011/05/in-brief-bolt-pr-shore.html

36. Henry Wade, The Duke of York’s Steps (1929)
Another notable work of detection by this author, with a good plot and strong characterization and writing.

Omissions here include collections by Christie, the Coles, Sayers, one about the Old Man in the Corner by Baroness Orczy (have not read it) and one by the Grand Old Man of Mystery himself, Arthur Conan Doyle. Also Edgar Wallace's J. J. Reeder collection (I represent Wallace with the novel The Crimson Circle).  The four collections below all come from the supreme Golden Age masters of the short form.

So, how many of these have you read?  If not many, happy reading!  If you can find them, of course.  Any help, publishers?  TPT

For facsimile jackets for most of these books see that truly amazing website, http://www.facsimiledustjackets.com/cgi-bin/fdj455/index.html

Posted by The Passing Tramp at 7:02 PM