Had I But Known Authors #1: Anita Blackmon, Crime Queen of Arkansas


In Murder for Pleasure (1941), Howard Haycraft listed ten women authors who constituted what he called the “better element”of the so-called HIBK, or Had I But Known, school of mystery fiction, which was effectively founded by Mary Roberts Rinehart (1876-1958) over three decades earlier with the publication of her hugely popular novel The Circular Staircase (1908).

The Had I But Known school of mystery fiction--as it was so dubbed by (mostly male) mystery critics after the term was used by Ogden Nash in a satirical 1940 poem, "Don't Guess, Let Me Tell You" (Personally I don't care whether a detective story writer was educated in night school or day school/So long as they don't belong to the H.I.B.K. school)--typically included mysteries with women narrators given to digressive regrets over the things they might have done to prevent the novel’s numerous horrid murders, had they only been able to foresee the awful events that were shortly to unfold.

Haycraft’s list of the ten premier Rinehart followers includes several names still fairly well-known to genre fans today, namely Mignon Eberhart, Leslie Ford and Dorothy Cameron Disney (he gives Mabel Seeley her own sub-section, classifying her, in contrast with the rest, as an equal of Rinehart), but also more obscure names as well.

In this series I plan to highlight genre work by these forgotten HIBK authors. I begin with Anita Blackmon, the HIBK Queen of Arkansas.

Anita Blackmon (1892-1943) published two mystery novels, Murder a la Richelieu (1937) and There Is No Return (1938). In the United States, both of Blackmon’s mysteries were published by Doubleday Doran’s Crime Club, one of the most prominent mystery publishers in the country.

Murder a la Richelieu was published as well in England (as The Hotel Richelieu Murders), France (as On assassine au Richelieu) and Germany (as Adelaide lasst nicht locker), while There Is No Return was published in England also (under the rather more lurid title The Riddle of the Dead Cats). 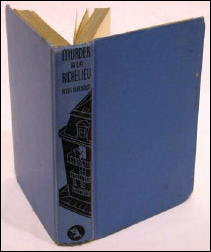 In the opening pages of Adelaide Adams’ debut appearance, Murder at la Richelieu, Anita Blackmon signals her readers that she is humorously aware of the grand old, much-mocked but much-read HIBK tradition that she is mining when she has Adelaide declare:

"There was nothing on this particular morning to indicate the reign of terror into which we were about to be precipitated. Coming events are supposed to cast their shadows before, yet I had no presentiment about the green spectacle case which was to play such a fateful part in the murders, and not until it was forever too late did I recognize the tragic significance back of Polly Lawson’s pink jabot and the Anthony woman’s false eyelashes.”

Well! What reader can stop there? Adelaide goes on with much gusto and foreboding to relate the murderous events at the Hotel Richelieu, a lodging in a small southern city (clearly Little Rock, Arkansas; see below). Adelaide is a wonderful character: tough on the outside but rather a sentimentalist within, given to the heavy use of cliches yet actually rather mentally acute.

The life in and inhabitants of the old hotel are well-conveyed, the pace and events lively and the mystery complicated yet clear (and at the same time played fair with the readers). Perhaps most enjoyable of all is the author’s strong sense of humor, ably conveyed through Adelaide’s memorable narration.

Blackmon clearly knows that, looked at strictly logically, HIBK tales can be a tad implausible in their incredible convolutions (as can the classical Golden Age mystery in general) and she has a a lot of fun with the conventions. Her readers should have a lot of fun too.

Blackmon’s follow-up from the next year, There Is No Return, finds Adelaide coming to the rescue of a friend, Ella Trotter, embroiled in mysterious goings-on involving spiritual possession at a backwoods Ozarks hotel, the Lebeau Inn (in fact the novel could well have been called, admittedly more prosaically, Murder a la Lebeau). 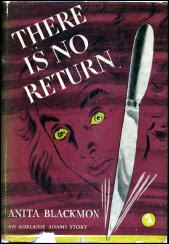 Return opens with yet another splendid HIBK declaration in the part of Adelaide:

“....had I foreseen the train of horrible events which settled over that isolated mountain inn like a miasma of death upon the afternoon of my arrival, I should have left Ella to lay her own ghosts.”

Though the isolated setting is excellent (classically, the guests are trapped at the Lebeau Inn after the bridge washes out) on the whole the novel is less amusing than Richelieu, yet creepier.  Indeed, the cavernous, lonely hotel corridors where a murdering maniac might be lurking began to remind me after a while of Stephen King's The Shining.  There Is No Return is a worthy sequel and it is very pleasing to encounter the old battle-ax one final time.


When Howard Haycraft published Murder for Pleasure in 1941, he clearly classed Blackmon as a major figure in the HIBK school, though she in fact had not published a mystery novel in three years. Two years later Blackmon would die at the age of fifty, and her fiction would be largely forgotten. I have discussed her genre work a bit, but have so far left unanswered this question: who was Anita Blackmon?


Anita Blackmon was born in 1892 in the small eastern Arkansas town of Augusta. The daughter of Augusta postmaster and mayor Edwin E. Blackmon and his wife, Augusta Public High School principal Eva Hutchison Blackmon, both originally from Washburn, Illinois, Anita Blackmon revealed a literary bent from a young age, penning her first short story at the age of seven.


By all accounts, Blackmon grew up into a vivacious, attractive, outgoing young woman. The future novelist graduated from high school at the age of fourteen and attended classes at Ouachita College and the University of Chicago. Returning home from Chicago, she taught languages in Augusta for five years before moving to Little Rock, where she continued to teach school.


In 1920, Blackmon left teaching and married Harry Pugh Smith in Little Rock. The couple moved to St. Louis, where Blackmon had an uncle who served as a St. Louis and San Francisco Railroad vice president, and in 1922 Blackmon published the first of what would be over a thousand short stories. Blackmon’s short stories appeared in a diverse collection of pulps, including Love Story Magazine, All-Story Love Stories, Cupid’s Diary, Detective Tales and Weird Tales. 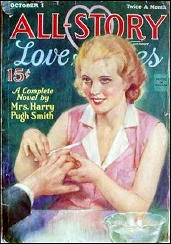 Blackmon began publishing novels in 1934 with a work entitled Her Private Devil, one that provoked some scandalized talk back in Augusta. Devil was published by William Godwin, a press, as described by Bill Pronzini, that specialized in titillating novels that pushed the sexual envelope of the day.  Godwin titles by other authors in the writing stable such as Delinquent, Unmoral, Illegitimate, Indecent, Strange Marriage and Infamous Woman give some idea of the nature of most Godwin fiction. 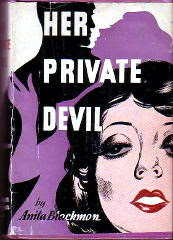 Blackmon’s book, which detailed the unhappy life of a southern small-town girl who gives into her overmastering sexual desires, is fairly bold, but by no means a “dirty” book. In actuality it is a serious study of a troubled young woman handled with considerable sensitivity and it is certainly not explicit by today’s standards. Still, the book raised something of a stir in conservative Augusta, with some in the town expressing disapproval.

Over the next few years Blackmon published traditional, mainstream novels under the name Mrs. Harry Pugh Smith, some of which had been previously serialized, before concluding her run with her two mystery novels, published, like Her Private Devil, under her maiden name.

The best known of the Mrs. Harry Pugh Smith novels was Handmade Rainbows, a tale of middle class Depression-era life in small southern town very like Augusta. Part of the enjoyment one gets from Blackmon’s better novels stems from the author’s effective depiction of unique southern local color.

Blackmon’s Murder a la Richelieu clearly is set in Little Rock, where there was in fact a Richelieu Hotel, while There Is No Return is set far in the Ozarks. Certainly many Golden Age mysteries with Arkansas settings do not come to my mind.

Why Anita Blackmon produced no more Adelaide Adams mysteries in her last five years of life is unknown. However, Blackmon died after a lengthy illness in a nursing home in Little Rock, where she moved after the death of her husband.  Perhaps under the circumstances she was not up to plotting and writing another full-length mystery novel, though she is said to have continued writing until shortly before her death.

Although Blackmon’s novel-length mystery output is very small, both her Adelaide Adams novels merit reprinting as significant examples of the HIBK tale.  Also worth noting are the many now-unknown short stories that Blackmon wrote, some of which (those published in Detective Tales) might well be of interest to mystery genre fans. Clearly, further delving is in order!

Information on Anita Blackmon’s life was drawn from Woodruff County Historical Society, Rivers and Roads and Points in Between 3 (Fall 1975), pp. 21-22 and interviews with Rebecca Boyles and Virginia Boyles. Special thanks for his generous help to Kip Davis, Augusta City Planner.

In part two of this series I will take a look at the distinguished Margaret Armstrong, the next of our so-called HIBKers.--The Passing Tamp
Posted by The Passing Tramp at 7:21 PM