Recently I mentioned The Copper Bottle, by one Edward J. Millward, in my post "Forty from the Twenties," wherein I recommended a list of thirty-six British detective novels and four mystery short story collections from the 1920s (see Forty from the Twenties ).  Today I look more closely at this novel, which I believe has much to recommend it.--The Passing Tramp 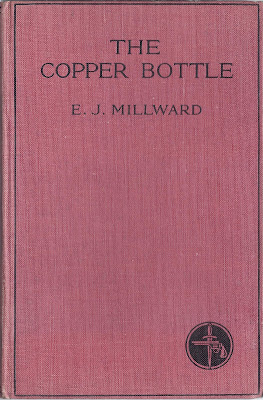 Published in 1929 as part of Methuen's "Clue Stories" series (it was also published in the United States),  The Copper Bottle is a strong example of a Golden Age British rural detective novel.  Unusually, it takes place in Wales, as the stunning endpaper maps indicates: 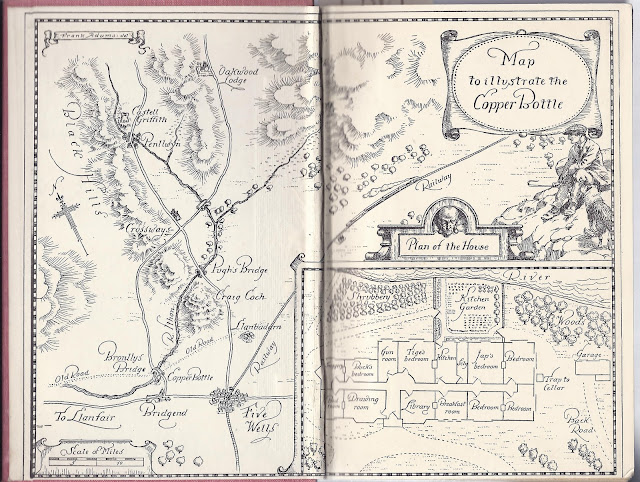 If you need more confirmation that this novel is set in Wales, let me add that one of the characters is a Constable Evans (perhaps a grandfather of Rhys Bowen's Constable Evans?).  Of course you can't have a Welsh mystery without a character named Evans!

The narrative structure of the tale is rather different from the norm.  It opens with a cyclist on a dark, snowy winter evening stopping at the Castle Vale Hotel.  The guests at the hotel learn that the newcomer is Erle Stallard, local poet, and that he has the latest news of the investigation into the recent murder at "The Copper Bottle," near the town of Five Wells.  At the urging of the guests, Stallard unfolds the story.... 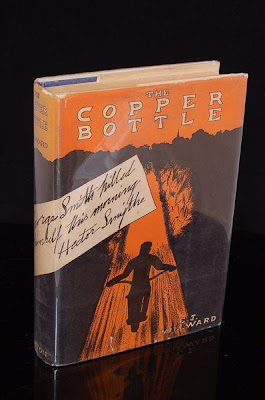 From this point on the narrative continues in Stallard's voice.  He tells of visiting his old Great War comrade, Police Inspector Greer, and Greer's friend, Sammy Fork, a detective, and during his visit learning that George Smith has been found dead of a rifle wound at "The Copper Bottle," a former inn now converted into a private residence (the map above includes an inset floor plan of the building--note the image of the genie's/demon's head carved above the doorway). 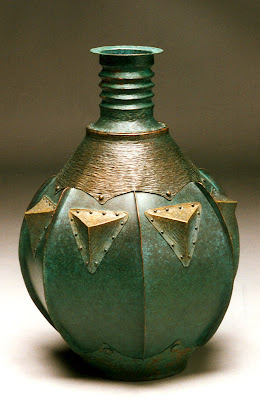 Erle Stallard soon emerges as our Watson, with Fork as a Holmesian Great Detective and Greer as the more bumbling Lestrade figure.  Stallard soon finds that he is personally impacted by the murder, the dead man turning out to be rather closely connected to Stallard's own family (Stallard is a grandson of the recently deceased Sir Reginald Griffith of Castell Griffith, a picturesque ruin evocatively described by the author). 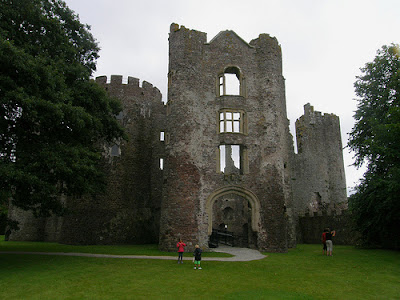 An interesting plot unfolds, as a number of suspects in the George Smith killing emerge, including George Smith's friend, Hector Smythe; a Japanese manservant (problematically named "Jap," though we are spared pidgin English); Erle Stallard's cousin, Frank; a neighbor couple, a Mr. and Mrs. Derney; and a private detective nosing about the vicinity.  In a touch of Moonstone, there is even a cursed gong from the East that sounds seemingly of its own accord.  There is a rumor that angry priests are out to recover the gong and avenge its theft....


The strongly conveyed setting is a great plus, and the whole story is original in several ways (besides the narrative structure, there is also the fact that the tale ends with a poem).  The tale was well-reviewed in its day, but for some reason there was a six-year lag before another Millward mystery, The House of Wraith (1935), appeared. It was followed by The Body Lies (1936) and The Aero Clubs Mystery (1939).  And that was that for Mr. Edward J. Millward.

According to William Rubinstein, Millward was a direct descendant of John Bunyan, was born in South Africa and educated at Leeds Training School for Teachers, and was a farmer and a newsagent.  This is absolutely all I know about the man currently, but further reviews of his books will be forthcoming.
Posted by The Passing Tramp at 5:46 PM