The Scarlet Circle (1943), by Jonathan Stagge

October is here and thus I thought I would choose as my Friday book a spooky detective novel: Jonathan Stagge's The Scarlet Circle.

As mentioned previously here, the Jonathan Stagge series of mysteries was the brainchild of those literary wunderkinds Hugh Wheeler and Richard Wilson Webb, aka Q. Patrick and Patrick Quentin.

This great Zaccone dust jacket illustration of an open grave in a dark churchyard suggests the macabre quality to The Scarlet Circle: 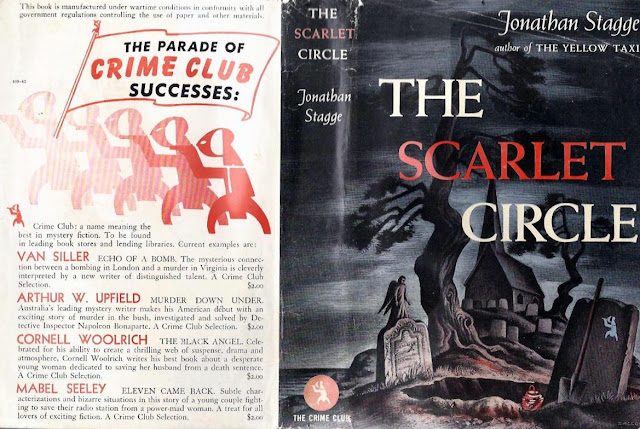 The Scarlet Circle benefits tremendously from its creepy setting: Cape Talisman, one of those crumbling (literally) H. P. Lovecraftian oceanside New England villages where seemingly everyone is sitting around waiting for Yog-Sothoth or some such creature to appear from another dimension.

Surprisingly there is to be found in this dying village a place of lodging: the Talisman Inn.  Equally surprisingly Jonathan Stagge's series detective, middle-aged widower Dr. Westlake, likes to vacation at the Talisman Inn with his daughter Dawn (who debuted in the series with her father seven years earlier at age ten and seems not have aged one month since).

And the Westlakes' favorite time to come visit is in September, after Labor Day, when the inn is nearly empty and the wind is apt to squall....

This year murder is added to the list of local attractions.  Three of them actually!  It seems that there is a serial murderer afoot, strangling women, laying their bodies out artistically under the eerie light of red Chinese lanterns and drawing circles with scarlet lipstick around each of their single most prominent moles.  Meanwhile, graves are being dug up in the church cemetery, also by the light of red Chinese lanterns.

How's this for a bizarre set-up?  The Scarlet Circle should be guaranteed to please devotees of John Dickson Carr, Ellery Queen and Hake Talbot, to name some of our most admired outre detective novelists.


Under the conventions of this sort of tale, Dr. Westlake is invited by the local police (in over their heads of course) to participate in (i.e., take over) their investigation.  He's solved some murder cases before, don't you know.

I suppose that the most original contribution of the Jonathan Stagge novels is the character of Dawn Westlake.  Children aren't too common a feature of Golden Age mysteries.  Dawn seems to be in the book mainly to provide comedy relief, she being one of those irrepressible Tom Sawyeresque hellions you often find in books.  Some may find her irritating (I kind of did), but I must admit that Stagge manages to integrate her into the book's resolution pretty effectively.

The setting is perfect and the characters sufficiently memorable.  Particularly striking is Mr. Usher (hmmm), the unctuous undertaker who seems rather too interested in female corpses.  Then there's Buck Valentine (now there's a name you won't forget!), the terrifically muscled lifeguard at the Talisman Inn ("Standing there in his swimming trunks, he looked like a maiden's dream of Flash Gordon"), who may have been romantically linked to all three murder victims.

There is in fact no shortage of suspects.  Moreover the plot is pleasingly complex and the clueing fair.  The Scarlet Circle is a top-drawer baffler in the classical style, and the best of the Jonathan Stagge books that I have read.
Posted by The Passing Tramp at 3:35 AM