Men had placed stone upon stone, rafters upon walls, a roof upon rafters.  Their hands had worked with cunning while their minds were plotting evil.  They planed and carved and polished that glorious staircase, and raised the great coloured window to enhance beauty.  They loved beauty even when loving evil, and the evil of their thoughts sprang forth to leap into these inanimate stones and panels and beams, there to be imprisoned forever.  From the laying down of the foundations of this house, was ever a loving word spoken?

This house lived only in the dark.

I've always liked the title of the Arthur Upfield novel Venom House (1952) and have had it on my "to read" list for, oh, the last decade or so!  Thinking this might be a good Halloween season novel, I thought I finally would give it go.

Australian author Arthur Upfield (1890-1964) made a hit in the United States in the 1950s with his Inspector Napoleon Bonaparte ("Bony") mysteries, though the first one appeared, I believe, as early as 1929.  Anthony Boucher was a great fan and advocate of the series, as was Jacques Barzun.  Indeed, most everyone seemed to like Bony (well, okay, not Julian Symons).

As a "half-caste" aborigine detective, Bony attracted attention in the 1950s, a time when the status of racial minorities in general was starting to get a lot more public notice.  Today the portrayal of Bony by Arthur Upfield, a white man, is considered controversial by some, though in the 1950s liberals and progressives like Anthony Boucher were more than pleased to give the series their endorsement.

Upfield's 1952 novel Venom House is something a bit different for the author, because, as the title suggests, it centers around a domicile, rather than the bush.  For many readers a great part of the appeal of the Bony series was following the detective's wilderness tracking skills. 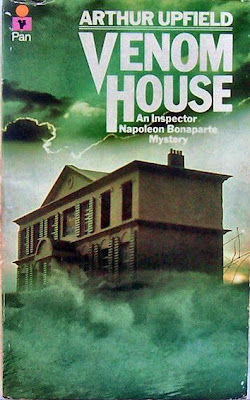 In Venom House, we get a little of this sort of thing at the novel's climax, when Bony is stalking about the house and its grounds late at night.  However, Venom House basically is a throwback to the Victorian sensation novel, or the Gothic tale, with an old mansion, a family curse, a mad relative locked away upstairs and quite a bit of strangulation.

The cursed family in the novel is the Answerth clan, whose forbears robbed and murdered the local Aboriginal people on their brutal way toward establishing their local cattle and sheep empire.  The bone was pointed at them, with dire consequences--so the locals in the nearby town of Emerson (mostly owned by the Answerths) believe.

First the land around the family mansion flooded, isolating the house on an island surrounded by dead trees.  Then there's the history of violence within the family itself, with fratricide, mistreatment of wives and suicide.  No wonder the Answerth mansion has been dubbed Venom House!

Suspicion can't help but center on the Answerth siblings, despite the fact that Janet and Mary run most everything in the area.  Mary, a "mannish" woman who seemingly can master any man in a brawl, is especially feared.  Janet, the much more feminine of the two sisters, hides her fist in a dainty velvet glove.  As for Morris, he's not quite all there.  Morris, who boasts he can snap necks like carrots, is kept confined to two rooms on the second story (or so it's thought).  Then there's the housekeeper, Mrs. Leeper, who used to be a nurse in an insane asylum....

Venom House is an interesting crime novel, full of Australian local color that should prove especially interesting to non-Australians.  Upfield has a leisurely and measured narrative style that does indeed remind me of the English Humdrums Freeman Wills Crofts and John Street (Julian Symons thought as much), but Bony, despite his tracking skills, seems more intuitive and less dependent than Crofts' and Street's sleuths on material clues.  The book actually is not as viscerally thrilling as I have probably made it sound, but it's a good tale nevertheless.

Arthur Upfield enjoyed a good run in paperback reprintsfor many decades, from the 1950s to the 1990s, and I think it a shame that he is out-pf-print now--another instance of the maladjustment of the modern mystery book market, for I know there are still people who would enjoy his books.

Note: There's been a lag on the blog, I know, since Friday, but I have been very busy with the proofs of my Todd Downing book, plus helping with the reprinting of six of his novels.  The good news all these books should appear in November (early December at the absolute latest) and I think they look really good!  The fantastically knowledgeable Bill Pronzini, who rediscovered Downing back in the 1980s, has been kind enough to write a preface for my book.

It's a great mission of my mine to get more Golden Age mystery authors back into print and I will keep at it in the year to come, rest assured.

I will be back later tonight with another Halloween post.  Like Dracula, I will keeping late hours!
Posted by The Passing Tramp at 3:51 PM