The Spiritualist (also titled, for some mysterious reason, The Amazing Mr. X), is one of those forties B mystery-thriller genre flicks that is superior to many much better-known, bigger-budgeted films from the period, in my opinion.

There's a much longer and quite excellent piece on this film and its director, Bernard Vorhaus, I found, over at Sergio's Bloody Murder blog, but, since I promised to semi-live blog the films watched this Halloween, I needs must write up an entry here! Also the great Turhan Bey, who played the title role, died a month ago at the age of ninety, so it seemed the thing to do to highlight one of his excellent acting performances. 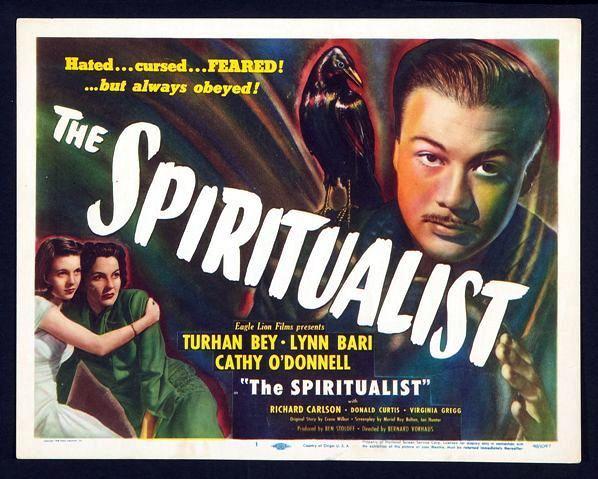 The Spiritualist tells the story of Christine Faber (Lynn Bari), a rich widow still moping around the family mansion (a stunning neo-classical pile overhanging a California ocean cliff) two years after her husband's death in a car wreck.  Christine hears dead hubby's voice in the crashing waves on the beach and is understandably a bit distracted when her somewhat dull but very persistent semi-boyfriend Martin Abbott (Richard Carlson) continually proposes to her.

Gradually Christine falls under the sway of a sophisticated spiritualist, known only as Alexis (Turhan Bey, absolutely at his most super-suave), who promises to put her into closer contact with the dwellers in the afterlife.

Martin, along with Christine's earnest but to be honest rather dimwitted younger sister, Janet (Cathy O'Donnell, very amusing) and a private detective named Hoffman (Harry Mendoza, marvelously weird performance), try to expose Alexis as a fraud, but Janet only ends up mesmerized by the spiritualist too!

A fine twist is introduced into the film, about which nothing can be said, of course!

I'll just add a few words about how entertaining The Spiritualist is.  The John Alton cinematography has been much praised, and justly; this is one of the most evocatively filmed black and white movies that I have seen (there's also a neat seance sequence).  And the romantic Rachmaninov-ish musical score by Alexander Laszlo is a great element too.


The script of The Spiritualist I found rather clever, with some great scares and genuinely amusing bits at well (witty, not silly slapstick stuff).  Lynn Bari and Richard Carlson are fine as the nominal romantic leads; but the stand-outs here are Cathy O'Donnell, delightful as the ingenue sister, and Turhan Bey, who really delivers the goods with a magnetic performance.

I also got a kick out of Harry Mendoza's deliciously odd turn as the private detective Hoffman (this man surely was meant to play Harry Stephen Keeler in a film).

The Spiritualist now is available in an immaculate print on DVD.  It's a bit pricey, but, I think, worth it.  If nothing else it will teach you to step carefully when taking late-night strolls along ocean cliffs!
Posted by The Passing Tramp at 9:55 PM