Rub-a-dub-dub, There's a Dame in My Tub: Murder with Pictures (1935), by George Harmon Coxe

George Harmon Coxe (1901-1984) is one of those 1930s American hard-boiled detective writers who started writing novels in between the appearances of The Thin Man (1934) and The Big Sleep (1939), but he doesn't get much attention, because, well, he's not Dashiell Hammett or Raymond Chandler, is he?  But that's a high standard to set, to be sure.

Coxe's first crime novel, Murder with Pictures (which first appeared in 1935, not 1937, as seems to be the date given on the net bibliographies), is certainly not in the league with Hammett and Chandler, yet I found the book interesting, though admittedly more as a social document than a tale of detection.

Probably what made the greatest impression with Coxe's first novel was the scene where the knock-out blonde, Joyce Archer, bursts into the apartment of our hero, newspaper photographer Kent Murdock, while he is taking a shower.  Demanding that she let him hide in the shower, she barges right in there with him (it's one of those footed tubs with a circular shower curtain).

This blonde had caught Murdock's eye at a party earlier that morning and he's a game fellow anyway, so he plays along, bantering the cops who shortly show up in his place too, as she cowers behind him.

In the fashion of these sort of tales, it seems that Joyce Archer found herself on the murder scene at another apartment (the one where the aforementioned party took place) and naturally she picked up the gun, getting her fingerprints all over it...well, you've heard this one before, right?  I'm pretty sure this happens in every other Mignon Eberhart novel, for example.

Why did Joyce show up at the murder victim's apartment at 4:30 in the morning, you may be asking?  Well, it seems she feared that her brother, wealthy and dissolute man-about-town Howard Archer, was going there to run off with the wife of the murder victim (Mark Redfield, ace defense attorney, by the by).  This is another convention in mysteries of this era: nice girls can always be counted on to get themselves in heaps of trouble on account of their feckless brothers. 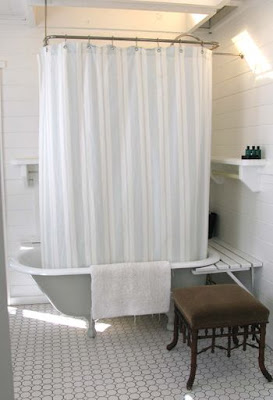 Oh, yes, despite her evident propensity to jump in showers with naked newspaper photographers, Joyce is indeed a nice girl.  Blogger John Norris has already reviewed the second Kent Murdock mystery, The Barotique Mystery, in which Kent and Joyce are on their honeymoon, so it won't spoil anything to tell you that they are about to get hitched at the end of Murder with Pictures.

I think back in the 1930s a couple had to get married if they spent any time in a shower together--well, at least when one of them was naked, anyway.

In a Hammett, Chandler or James M. Cain novel, Joyce would be that dreaded thing, a femme fatale, and either shot dead or adorned in bracelets as she's carted off to the paddy wagon, but Coxe's novel is more semi-tough than tough and spares us this sort of unpleasantness. 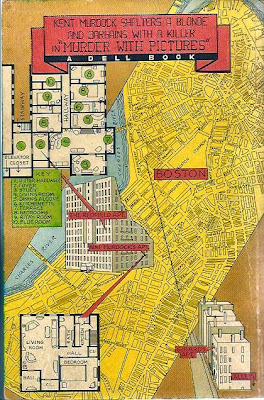 In fact Murder with Pictures is not so different, it seems to me, from a classical detective novel in its resolution (admittedly the incident is more colorful, in terms of sexual innuendo, gunplay and manly fisticuffs).  Order is rather nicely restored by the end of the tale, with Kent Murdock's estranged current wife, one of those low class calculating chorus girl hussies, effectively bought off, leaving him free to marry good girl Joyce.  Oh, and Kent solves the murder too (all of this is expertly dovetailed by Coxe).

I was engaged less with the mystery than with Murdock's efforts to get everything straightened out satisfactorily.  Murdock likely served as something of a role model for some of Coxe's readers.

We are informed that Murdock had three years of college, where he learned to like books and fine things (he has a copy of Green Mansions in his apartment), and that he's presentable in classy company; yet he's not an effete twit like that rich playboy Howard Archer.  He has a sense of honor that Howard lacks and he knows the value of honest work.  As Joyce says, he's just not like those other, cocktail-swilling society boys she knows, unlike them, he does things.

Coxe himself attended college for two years (one year at Purdue and another at Cornell), before trying work at all sorts of places: auto factory, lumber camp, dance orchestra.  Eventually he became a--surprise!--journalist; his hobbies included--surprise!--photography.

We often read how 1930s hard-boiled fiction was ideologically subversive or politically left.  I didn't get the sense of that from Murder with Pictures.  Heck, Coxe even defends Boston cops:

Neither man was brilliant, neither was spectacular, unduly imaginative, or blessed with more than average intelligence.  But in their own line of work, which as often dull and almost always routine, both were hard, competent, and so honest they leaned over backward.

Just to prove this, Murdock doesn't get beaten to a pulp by a cop even once, or even slapped around a bit.  Heck, the cops actually like Murdock.

I don't imagine I will ever be tempted to read this particular mystery again, but I probably will read something else by George Harmon Coxe, something, I hope, with a bit stronger plot (this was his first novel, after all).  But Murder with Pictures was not without interest.

Note 1: Apparently it was adapted into a film as well.  I would love to hear from anyone who has seen the film.

Note 2: A number of George Harmon Coxe novels now are available as eBooks from Otto Penzler's Mysterious Press.  And of course there's always the used market!  Back in his day, Coxe was quite popular in paperback.

Posted by The Passing Tramp at 2:36 AM