Absent in the Spring is the third of Agatha Christie's "mainstream" novels written under her Mary Westmacott pseudonym.  I find Spring the most fascinating of Christie's Westmacott novels, because in it Christie successfully employs her exquisite mystery plotting technique to structure what is a psychological "straight novel," rather than a murder mystery.

Though published in 1944, Absent in the Spring takes place in the 1930s, a few years before the outbreak of World War Two (in the later part of the novel there is some discussion of Hitler's rise to power and his threat to European peace).

Joan Scuddamore is a seemingly invincibly smug and complacent provincial English matron in her late forties with a lawyer husband and three adult children ("Oh, no, my dear.  I'm a very busy woman in my small way.  I'm the Secretary of the Country Gardens Association--And I'm on the Committee of our local Hospital.  And there's the Institute--and the Guides.  And I take quite an active part in politics.").

Joan is returning from a visit to her daughter Barbara, who married young and moved out to Iraq.  The novel opens with Joan encountering an old school friend, Blanche Haggard.  Joan is very superior when meeting the much married and rather Bohemian Blanche, who has moved down in the world. 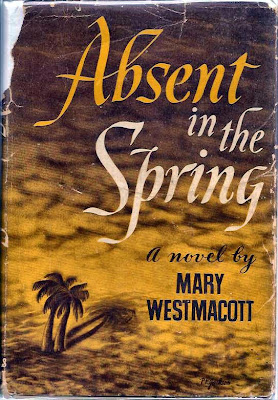 In a bit of foreshadowing, Blanche speculates on what Joan would do were she, Joan, to be stranded at a railway Rest House on her way back through western Iraq (the weather is unpromising):

"If you'd nothing to think about but yourself for days and days I wonder what you'd find out about yourself--"
Joan looked skeptical and faintly amused.
"Would one find out anything one didn't know before?"
Blanche said slowly:
"I think one might..."  She gave a sudden shiver.  "I shouldn't like to try it."

Well, sure enough, Joan gets stranded and she finds that being alone with her own thoughts for days on end proves an intensely uncomfortable ordeal (she quickly runs out of reading material, having brought only three books with her--one a detective novel, though she doesn't much like them).

The bulk of the book is devoted to Joan's enforced stay at the Rest House and to her thoughts about her relationships with the people in her life, past and present.  She unwillingly starts to reinterpret earlier events and to see them in new, unpleasing, ways.

This part of the book is rather like one of Christie's detective novels, in that past conversational exchanges start to take on new meanings when looked at in a different way.  There is a puzzle here (complete with psychological red herrings), but it's a puzzle of personality, not crime.

I was reminded of the "Dark Christie" mysteries of this period, the tales that dare to make us uncomfortable and that refrain from offering neat and tidy--or "cozy"--resolutions (as Christie's books so often are stated--over-sweepingly--to do).

Three of the above novels are Hercule Poirot tales. Though Poirot is absent from Absent in the Spring, Spring shares some affinity with Five Little Pigs (retrospective analysis) and And Then There Were None (the idea of being trapped in an isolated location and compelled to engage in unpleasant self-analysis).

Additionally, the character of Joan Scuddamore's elder daughter Averil is very similar to Arthur Hastings' daughter Judith in Curtain (even the central story line concerning the two characters is similar). The resemblance is so close, indeed, that it's hard not to see Curtain having been written around the same time.

People who have accepted the stereotype of Agatha Christie as a complacent and commonplace thinker would be surprised, I think, at some of the attitudes expressed in Absent from the Spring.  The author in the book argues against always doing the safe and "sensible" things in life.

Absent from the Spring is a fascinating novel, in its own way as much of a compulsive page turner as Christie's best mystery tales.  In the New York Herald Tribune it was praised at the time by Rose Feld as "a gem of a psychological portrait" and I think this is true.
Posted by The Passing Tramp at 4:59 AM