From its 1936 publication of Seven Suspects--the American title of Michael Innes' first detective novel Death at the President's Lodging (an apt-to-be-misleading title for American readers)--Dodd, Mead's Red Badge Detective mystery fiction imprint employed, with a few exceptions, a specific design style for Michael Innes novels, one which the publisher maintained for over four decades, up through the publication of The Gay Phoenix in 1977.

Most of the 27 John Appleby detective novels, 3 John Appleby short story collections, and 10 non-series detective novels published in this period had jackets reflecting this design scheme, composed of a black background with minimalistic strokes in red, white and gray.  As far as I am aware this is a unique feature in long-running mystery fiction in this period.  Why the switch-over took place in 1978 I don't know, but the change stayed in place until Innes' (and, indeed, arguably the Golden Age generation's) last detective novel, Appleby and the Ospreys, was published in 1986, during which time there appeared from Innes a total of five more Appleby detective novels, including Ospreys, and three more non-series ones. 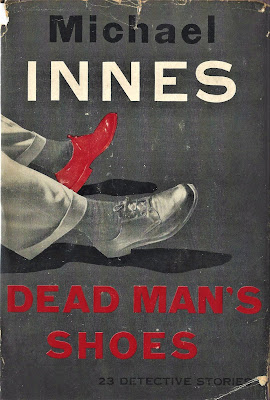 One of the eye-catching exceptions to this rule is Dead Man's Shoes (Appleby Talking in UK), a collection of 23 pieces of John Appleby short fiction published in 1954.  Although the black/white/red/gray color scheme is adhered to, there is a more detailed design, emphasizing, appropriately, a dead man's pant's cuffs, socks and mismatched shoes.  One of the shoes in an unexceptionable black while the other is red--certainly a striking and odd color in this context.

Sadly, in the title novelette of about 16,000 words we find that the mismatched shoes are actually black and brown, not black and red; so the jacket turns out to be misleading in this regard.

Before reading the story I had been innocently looking forward to the explanation of why the shoe was red (like John Rhode's green hedgehog): Was it like radioactive or something?  Alas, however, the eventual explanation which the author provided did not involve any weird and woolly science.

Happily, however, this is still a very clever, well-clued mystery, however, which I probably would have read over twenty years ago, when I was on my first Innes reading jag, had the novelette not had an espionage background, which predisposed me against it at the time (plus the copy I had then was a drab paperback edition).

Fear not, however, "Shoes" is a "fair play" mystery in the classic mode and a very good one at that.  I loved how it opened with the time-honored gambit of the imperiled "girl on the train" who implores our young hero for help, as she has just escaped from a man in another compartment whom she believes was about to murder her.  These "girls" really should stay away from trains, don't you know.

First there was Agatha Christie's "The Girl in the Train," from 1924 and much later we had Paula Hawkins' Girl on the Train from 2015 (filmed with Emily Blunt in the title role the next year), with a plentitude of other troubled train "girls" in between them, like Ruth Kettering in Christie's Mystery of the Blue Train (1928) and Iris Carr in Ethel Lina White's The Wheel Spins (1936), famously filmed by Alfred Hitchcock as The Lady Vanishes.  So all you "girls" out there reading this blog post really should know by know: Beware of the trains!  Read "Dead Man's Shoes" if you still don't believe me.

Of course trains can get men in trouble too.  See Patricia Highsmith!

The other 22 works of short fiction in the collection are much shorter--indeed, the majority of them are short-shorts of under 2000 words.  Throughout the 1950s Innes specialized in the newspaper short-short mystery and was quite adept at it, but many of these tales here, I must admit, get rather whimsical, and are even on the shaggy-doggish side.

Typically they take the form of Appleby talking (hence the English title) about some past crime with some of his male acquaintances (the vicar, the doctor, the lawyer, etc.) in the seaside town of Sheercliff (setting of "Dead Man's Shoes," by the way).  Some of these are clever and a bit more developed, however, like poisoning tale "The Furies" and "The X-Plan," another crime story with espionage trappings, and "Appleby's First Case."  (I think I have seen "The Furies" before in an anthology.)

Then there are a few short stories proper, about 4000-6000 words long say, which are quite good indeed: "Lesson in Anatomy," "A Dog's Life," "Pokerwork," "The Key" and "Tragedy of a Handkerchief."  "Anatomy" concerns a murder which takes place when the lights go out during an anatomy lecture at Nessfield University.  (See Innes' 1943 John Appleby detective novel The Weight of the Evidence, where in the English edition it is "Nesfield," I believe.)

This is well-devised detective story, although I must admit that the "rags" which the medical students callously perform with anatomical "specimens" (i.e., blameless human corpses) rather rankled me.  Innes always indulgently gives university students great scope for consummate assery.

Not for the first time was I struck by the obnoxiously privileged behavior of college students in Innes' books, which really hung on over the entirety of the author's fifty year mystery writing career.  The author himself--whose real name was John Innes Mackintosh Stewart--was a longtime academic and taught English literature at Oxford for 24 years, retiring at the age of 67 in 1973, when changes were really starting to roil the system.

The other four stories all involve, in one way or another, murderous consequences of illicit passions among men and women.  "A Dog's Life" oddly anticipates the tragic drowning deaths of Daniil Gagarin and Emma Monkkonen which took place just a few months ago and which, due their horrific nature, went viral on the internet.

Of these four clever tales I particularly liked "Pokerwork," about a murder committed with one of the classic slaying weapons.  (A number of the story titles, as you will see, are puns.)  Shorn of the dazzling literary embellishments of the Innes novels (particularly the early ones), these stories make manifest just how able Innes was at the craft of clueing, a skill at which he is underrated.  In a contemporary review of Dead Man's Shoes influential crime fiction critic Anthony Boucher called the collection "an approximately perfect book" and he asserted that "even readers who have shied away from the long Innes novels may be charmed by these briefer samples."

Still in my view one needs to read Innes' novels to get the full flavor of Innes.  In a review of Dead Man's Shoes at Jason Half's blog, Jason asks, "Is it fair to judge a novelist based on a set of short stories?" and answers: "The immediate answer is, of course, yes."  I would argue, however, that the answer is, to the contrary, "Heck, no!"

Set aside the "great" novelists, to really appreciate Michael Innes (and whether you can really appreciate him) you simply must read some of the earlier books, the great detective extravaganzas like Hamlet, Revenge!, Lament for a Maker, Stop, Press, The Daffodil Affair or Appleby's End, say.  (Or you could just start with this one, which is quite good, from the author's middle period, or even this one, from his later period.)

To do otherwise is like thinking you have done justice to Rex Stout's Nero Wolfe saga by reading, say, "Murder Is Corny" (see my review), rather than Some Buried Caesar or And Be a Villain, for example.  It just won't do, sir!  Though it's actually even worse in Innes' case because the bulk of his short fiction are the merest of trifles by design.

Jason, who posted this review nearly three years ago, in December 2018, admitted then that he had not read any of Innes' novels, so his question is a pertinent one.  At the end of his review he speculates that he might owe it to the author "to sample more of his writing, to see what he can do with one novel-length story instead of 23 too brief but promising little ones."  To which I would add, I should say so!

Anyone who likes Gladys Mitchell like Jason does should like Innes' early novels, I would think.  I haven't seen a review of a Michael Innes on his blog since then, however.  Did he ever give it another go with Innes?  I hope so.  When it comes to crime fiction, you have to walk a few miles in the dead man's shoes.