I wasn't surprised to find that medievalist scholar and Cambridge provost Montague Rhodes James, who wrote supernatural horror fiction under the name M. R. James, was a reader of detective fiction by Agatha Christie (and presumably other authors).  The milieus of his stories--villages, country houses, universities--are so often what you find in Golden Age detective fiction.

But more than that, James' tales often concern investigations into past mysteries, conducted by learned, even eccentric, gentlemen of means.  Even if the resolutions typically are not so tidy as those in a detective story, we are still trying, as in the detective story, to get to the bottom of decidedly queer enigmas.  (Some authors of that time explicitly merged the genres with the employment of "occult detectives.")

The leadoff frightener, "A School Story," is by far the shortest of the bunch and the least substantial, a simple tale of revenge from beyond the grave taken upon a schoolmaster, which makes similar creepy use of a well to the Japanese horror film Ringu and its American remake The Ring.

"The Rose Garden" details what happens when Mr. and Mrs. Astruther (the latter a most imposing matron), decide to lay out a rose garden at a secluded corner of their newly acquired country house.  It's an entertaining enough story, but I thought the scariest thing in it was the intolerably bossy Mrs. Anstruther. 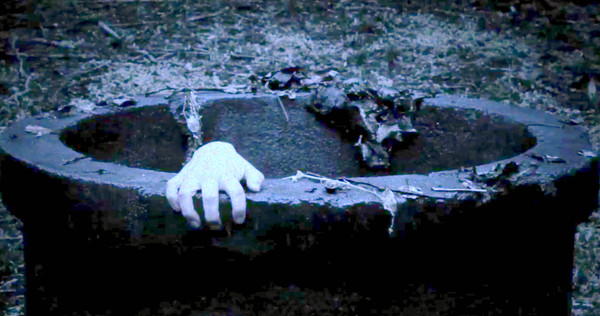 "The Tractate Middoth" and "Casting the Runes" (great titles both) concern scholars in desperate search of mysterious objects.  In the former, there's even a hunt for a lost will, like something out of Agatha Christie.  (Indeed, the Queen of Crime has an Hercule Poirot short story about a missing will.)

On rereading these stories I found neither as frightening as I had recalled, but "Casting the Runes," I must add, has a simply smashing setup, which was brilliantly adapted in the 1957 horror suspense film Night of the Demon, one of my all-time favorite movies.

"Runes" is about an amateur scholar and, well, rather nasty demonologist named Karswell who gets a wee bit, um, wrathful when his academic article is turned down for publication.  Coming from an academic background myself, I didn't find this part such a stretch!

It all results in a sort of supernatural duel to the death, revolving around a slip of enchanted runes, between Karswell and Dunning, the outside reader responsible for Karswell's article getting rejected. Among the things for which the article is condemned, by the by, is its having had split infinitives, which made me sympathize a bit with that poor devil Karswell, I must admit!

Although the "Runes" is not nearly as terrifying and thrilling to my mind as the film (I really could have done without all the stage Cockney dialogue, for example), it has some very neat elements.  The line "However, Mr. Karswell was an astute man" has stuck with me for decades.  It's deliciously chilling in context.

Moreover, there's an episode, described at second hand, where Karswell "entertains" village children with a "magic lantern" slideshow which is genuinely horrific.  This was only very loosely drawn on in the film, but it surely inspired the slideshow sequence in the latest film version of Stephen King's horror novel It.  (See below.)  Was this is King's novel as well? I'm guessing it was meant as an homage to James.  I thought it was the scariest thing in the film!

My favorite stories in James' second collection, however, are the last three: "The Stalls at Barchester Cathedral," "Martin's Close" and "Mr. Humphreys and His Inheritance."  "Stalls," set in the early nineteenth century and told largely in diary form, concerns the strange demise of John Benwell Haynes, the late Archdeacon of Sowerbridge.  Essentially this is an inverted crime story with monsters.  It's very creepy!

Martin's Close is a true tour-de-force, told largely in trial record form, about the murder of a homely common woman, Ann Clark, by the aristocrat who was emotionally toying with her and his subsequent trial before Baron Jeffries, the infamous real-life seventeenth-century English "hanging judge."

It's a brilliant variant on the "spectral bride" legend, about which I want to say more when I get to posting about Joseph Shearing.  It should have been titled, "Madam, Will You Walk?," however.   Along with Mrs. Anstruther and a garden maze expert named Lady Wardrop (see below), Ann Clark is the only notable female character in this collection of short stories.

Speaking of Lady Wardop, there is, finally, "Mr. Humphreys and His Inheritance," which tells of the sinister supernatural goings-on at the hedge maze at Wilsthorpe Hall.  Mazes have been great settings for scares since the time of Theseus, as anyone who read mythology and seen the film version of Stephen King's The Shining or read J. J. Connington's detective novel Murder in the Maze will know.  (Is the maze in King's novel?  Is this another homage?)

M. R. James really delivers the goods here, in a story that's rather more ambiguous than the others.  And, after all, surely that's the ultimate horror to a Golden Age mystery fan: having a resolution which fails fully to resolve the mystery!  We are all afraid of the unknown and even more so of the unknowable. 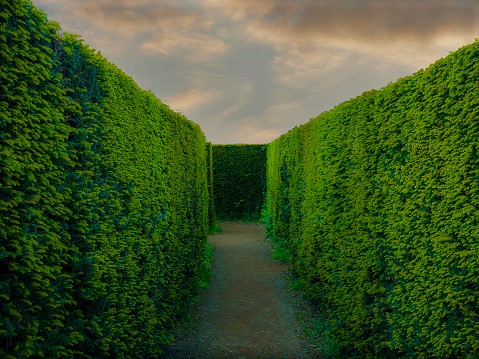 Posted by The Passing Tramp at 8:00 PM