Coachwhip Publications has completed the design for the new edition of the 1936 American detective novel The Strawstack Murder Case, for which I contributed a 6000 word introduction on the book and its author, Kirke Field Mechem (1889-1985). The introduction is titled "Philo on the Plains"--a reference to S. S. Van Dine's once-influential Great Detective, who seems clearly to have been a model for Mechem's brilliant amateur sleuth Steven Steele (though Steele is vastly less affected than Vance).

One of Mechem's sons, the composer Kirke (Lewis) Mechem, was a big help with this project.  There are also a nice illustrations of Kirke Field Mechem and the dust jacket of the first edition, published by Doubleday, Doran's august Crime Club under the title A Frame for Murder (the author had wanted the title The Strawstack Murder Case, which has been duly restored). 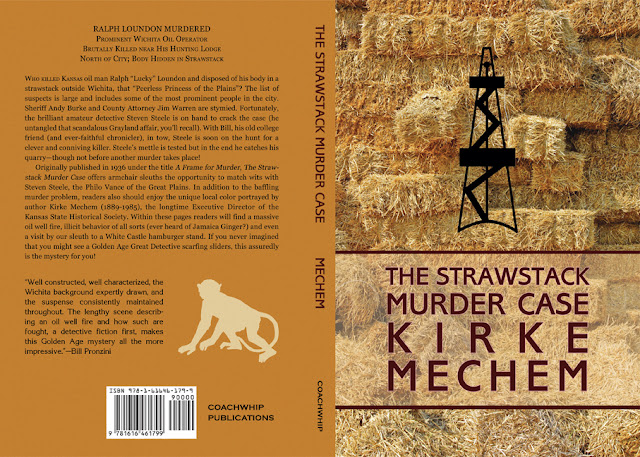 I think the new edition Coachwhip did has a nice design, redolent of the Great Plains, which is appropriate enough since the book is set in Wichita, Kansas and its environs. This is the first reprint project after Todd Downing that I have taken up with Coachwhip.  I hope to work with Chad Arment on several more of these over the next few months.

And, yes, that is a monkey on the back, by the blurb from Bill Pronzini.  Poe's Rue Morgue is mentioned in the novel....

The new edition of The Strawstack Murder Case will be available within the next couple weeks.
Posted by The Passing Tramp at 4:30 AM