Blast from the Past 3 The Man Who Was Leo Bruce--The First One! 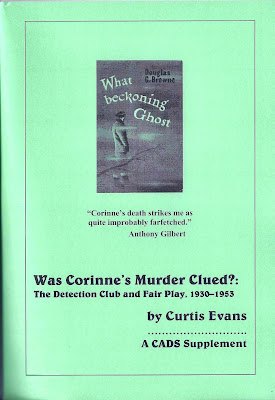 Between 2011 and 2015 nine articles by me appeared in CADS: Crime and Detective Stories, currently the best magazine about classic crime fiction available, I think.  (If you are a fan of the stuff and you don't already subscribe you should.)

Two of these CADS articles I have reprinted here: one on the crime novels of Anthony Rolls (2014) and another on The British Golden Age of Detection's Deposed Crime Kings (2011).  CADS also published a 54 page booklet by me, Was Corinne's Murder Clued? The Detection Club and Fair Play, 1930-1953 (2011), which a few years later served as some of the source material for another sally--longer and rather better known--in this field.

The first piece I ever offered to CADS, however--back, I believe, in 2009--was a really long essay called The Man Who Was Leo Bruce: Rupert Croft-Cooke, 1903-1979.  (Leo Bruce, readers of this blog may know, is one of my favorite crime writers.) The Man Behind CADS, Geoff Bradley (the co-dedicatee of my book Clues and Corpses), turned it down because it was in his view (a) really long (true!) and (b) insufficiently concerned with crime content.  (Judge for yourself, but Geoff probably was right.)

Bloody but unbowed, I then offered the essay to Clues, edited by Elizabeth Foxwell...and she didn't want it either: too long again, and, I must admit, I'm not sure the tone of the piece was right for Clues.  It's scholarly, I think, but it doesn't really engage in academic shop talk, interesting in itself but not what I wanted for this essay.

I can't recall at this late date whether I actually attached the article or just talked about it in the emails, but, in any event, I didn't get takers.  Geoff, by the way, doesn't remember any of this at all.  (See below.) 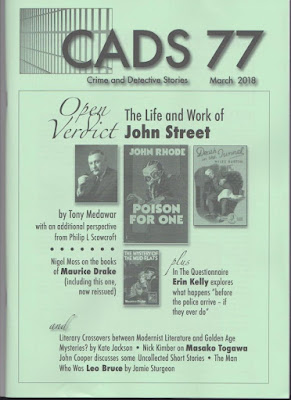 When you've given birth, if you will, to a bouncing, indeed bruising, 18,000 word essay, you want someone to desire the fruit of your loins, even if you don't get paid for it.  This was before I had published anything on mystery fiction, including Masters of the "Humdrum" Mystery (2012).  So I was happy when finally, in 2010, Sam Karnick agreed to publish the piece at his American Culture website.  (This was a year before I started my blog.)

The Man Who Was Leo Bruce has since been up there for more than seven years and it has been and still is, I believe, the best secondary source on the man's fascinating life.

This morning I was reading Kate Jackson's Cross Examining Crime blog and was struck to learn there that the latest issue of CADS has a new article by Jamie Sturgeon, called, on the cover though apparently not within the issue itself, The Man Who Was Leo Bruce.

Jamie is an excellent researcher who finds all kinds of interesting things (it was Jamie who put me on to the identity of the Roger Scarlett plagiarizer Maurice Balk; I doubt I would have found that without his insight), but I was struck by the use of "my" title on the cover for an article I didn't write.

I emailed Geoff Bradley and Geoff quickly replied, stating that the person with CADS who came up with the duplicate title for the cover thought that the title of the piece, "Leo Bruce and Rupert Croft-Cooke," was "not intriguing enough for the cover and just made up "The Man Who Was Leo Bruce" from the description I had sent. ("A look at Rupert Croft-Cooke in general and his attempts to keep it secret that he wrote detective stories as Leo Bruce.") He didn't know of your article."  And Geoff, I learned, has no memory that I ever offered the Croft-Cook essay to CADS in the first place.  But I very much have a memory of it.  One thing I think a writer always remembers: rejections.

However, we all agree on one thing, it appears: it's a damn good title!  I thought under the circumstances maybe I should point out the essay to readers of this blog.  It's a long piece, as stated, but if you stick with it you may enjoy it.  It helps if you're a fan of Leo Bruce's writing, as I am.

I look forward as well to seeing Jamie's CADS article, which I have no doubt is excellent.  There's also, I see, a couple of pieces in the new issue on John Street, who received a great deal of attention from me in Masters of the "Humdrum" Mystery, including an article by Tony Medawar, who was asked to introduce Collins Crime Club's reprint of the debut Dr. Priestley novel, The Paddington Mystery.

Maybe one day we will call this strange saga "The Case of the Two Leo Bruce Articles."  By all means, read them both.  Leo Bruce (and Rupert Croft-Cooke) is worth not just articles, but a full book.  Meantime, please follow this link to read The Man Who Was Leo Bruce.  The first one.
Posted by The Passing Tramp at 3:37 PM