No Lack of the Irish: Untimely Guest (1976), by Marian Babson

[Nicholas] was too young to have learned the hypocrisy which dictated that kinship was automatically synonymous with love, liking, and all things bright and beautiful.

Eleanor had almost, but not quite, grown accustomed to the Irish ability to ignore and'or delay specific action until long past the time when the necessary specific action might have helped the situation.  Either the stitch in time philosophy had bypassed them completely, or they simply refused to believe in it.  Which, considering some of the other things they managed to believe, was rather straining at a gnat.

"We'll be lucky if this doesn't kill Mam....She'll never be able to understand."
....Mam was a woman you couldn't kill with a meat-axe [thought Eleanor].  But it was not the sort of remark calculated to endear a daughter-in-law, if repeated.

"Will she have any hair?" Nicholas kept asking urgently during the long days of waiting [for Bridie to arrive].  At seven, certain questions acquired an importance disproportionate to their intrinsic value...."Mickey Concannon says she'll be bald as an egg.  He says that's why girls go in to begin with--so that nobody will notice."


As I discussed in a  blog post some seven weeks ago, the late crime writer Marian Babson (aka Ruth Marian Stenstreem) had quite a varied ancestral quilt figuratively stored away in the family chest, with Swedish (Stenstreem) and Irish (Coyne) threads as well as quaint old stitches of Puritan New England (the Babsons from whom she derived her pen name).

Marian Babson also had an inter-denominational background, with a Catholic strand intertwining with Protestant denominations.  Her prominent ship-owning merchant great-grandfather, Gorham Babson of Gloucester, Massachusetts, was a member of the Universalist faith that gained a following in New England in the 19th century, which preached universal salvation and was rejected by some Christians as a faith that was not actually Christian. (Indeed, even some Universalists, the church since having merged with Unitarianism, no longer see themselves as Christians.)

When Marian Babson's parents Earle A. Stenstreem, a gardener, and Catherine Elizabeth Coyne, daughter of painting contractor Patrick Martin Coyne and Mary Dever, wed in 1928, however, it was at the Church of the Immaculate Conception in Salem, Massachusetts.  Was Marian Babson raised a Catholic?  I have no idea.  Certainly the Coyne presence in Salem was substantial, with Patrick and Marian having produced a brood of nine children, six daughters and three sons (Mary Josephine, Margaret "Peg," John Francis, Susan Teresa, James Michael, Grace Agnes, Rose Agnes, Joseph Patrick and Catherine Elizabeth, Marian's mother).  Earle Stenstreem, on the other hand, was an only child, as was his mother Alphonsa Babson Stenstreem, both her older brother and sister having died in infancy.

Of Marian's grandparents, her paternal grandfather, Charles Stenstreem, had died around the turn of the century, and her maternal grandfather, Patrick Martin Coyne, would pass away fewer than six months after she was born.  However, Marian presumably would have known both of her grandmothers, with the very English Alphonsa Babson Stenstreem living until 1940 and the very Irish Mary Dever Coyne hanging on until 1942.

Before reading Marian Babson's intriguing eighth crime novel, Untimely Guest--published in 1976, the year of the American Bicentennial (which I sat out on the sidelines, if you will, living in Mexico that year)--I had already assumed that Marian Babson identified more with the Babson side of her family than the Coyne, in part because she took Babson for her pen name, but also because she chose to move permanently to London around the time she turned forty and because of the British settings of so very, very many of her mysteries.

The woman seems clearly to have been, like so many cozy mystery fans, a ardent Anglophile of the tea and crumpets sort.

Reading Untimely Guest--Babson's only novel, as far as I am aware, set in Ireland--has amply confirmed me in this view.  "[E]very hit goes home," pronounces the blurb on the Collins Crime Club book jacket of the first edition (the novel was not published in the US until 1987), and "hit" is an apt word in this context.

Through Babson's focal character, Eleanor, a Protestant who has married into a troubled Catholic family in Ireland, the author gets in quite a few trenchant criticisms of Irish life in the 1970s (particularly concerning the still considerable influence of the Church on family life), though I couldn't help wondering whether her experience of Ireland was more from the 1950s, the age of "Call the Midwife" if you will, when a twentysomething Babson began doing quite a lot of trans-Atlantic traveling between the US and the British isles.

Yet, even as the country has legalized same-sex marriage (in a 2015 referendum by a margin of 62 to 38 percent), Ireland is still dealing with bitter controversies from its Church-dominated past, particularly the treatment of children of unwed mothers in homes run by Catholic nuns, where, it has been shown, abuses ran rampant. So perhaps Babson's novel still has a timely message, when there are appalling news headlines like that about a mass grave of babies and children begin discovered on the grounds of the former Bon Secours Mother and Baby Home in Tuam, County Galway. (The Home closed in 1961.) 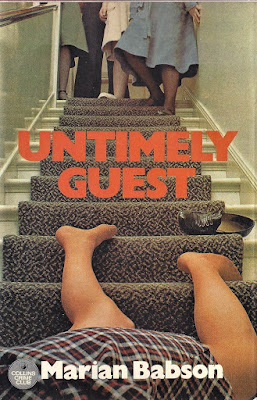 The steps to death begin in Untimely Guest when sister Bridie, after the closing of her Chapter House (the nuns are "going to a less enclosed Order, where most of the restrictions had been eased"), returns home after a decade to live with her brother Kevin and sister-in-law Eleanor (and their two young children, Nicholas and Margaret, and their cat, Furface)--much to the chagrin of the family, who find Sister Bridie's cold and austere presence not only unsettling but actually maleficent.

The rest of Bridie's siblings and in-laws find the former nun's return offputting as well, even though they, to their manifest relief, are not the ones stuck with providing Bridie with her room and board.

These are brother Patrick and his frequently pregnant wife, Carmel, unmarried stay-at-home sister Veronica, and free-thinking and free-loving Dee-Dee, the sister who caused scandal by divorcing her still-besotted husband, Terence (whom she had earlier taken away from Bridie in her pre-convent days), and taking up with a new man, James.

And then there is the formidable and poisonous family matriarch, Mam, who no one dares even tell about Bridie's return, because Mam believes that Bridie's being a nun has guaranteed her an ticket to Paradise, if you will, without Mam herself having to spend any unpleasant time in Purgatory, making up for past sins.

We learn in a prologue to the novel that a family member gets fatally pushed down a stairway--but who will it be?  There's considerable suspense as to this event, which does not take place until late in the novel.  The solution comes by confession, but is deducible by the readers--at least on an emotional level.

I found Untimely Guest an interesting and engaging crime novel.  Is it a cozy?  Again, I don't know. There are some very bitter feelings expressed in the novel and the view of "family values" is ambiguous. In particular, "Mam" is a malevolent horror, a religious hypocrite of the first order, a person who actually encourages her son Pat to get her daughter-in-law Carmel repeatedly pregnant, in the hope that eventually a pregnancy will kill her.

Carmel at one point fantasizes about the Pope (or Himself, as she terms him) getting abducted by a band of avenging women scientists and forcibly implanted with a human fetus, so that he will learn what it is like for the women to whom he dictates, as the duly and divinely authorized spokesman for God's Will. This seemed pretty scabrous stuff for a cozy!*

There's also complaint about the presumed election, next time around, of yet another Italian pope--quite wrong there, as those of us who watched the amazing reign of Pope John Paul II will recall.  Italian popes seem to have had their day (a very long one, to be sure).

On the other hand, the view of Eleanor and Kevin's family life (without Bridie) is charming.  Especially their young son Nicholas but also baby Margaret and Furface the cat--we all know Babson knows her cats--are wonderful characters.   (The whole saga of Nicholas' relationship with a neighbor boy, Mickey Concannon, is so very amusingly, and truly, portrayed.)  So there are definitely cozy elements to this arguably non-cozy mystery.

There's little sense of Irish place conveyed by Babson, but she does give us a fine sense of people, particularly the womenfolk in this quarrelsome but memorable family clan.  How much of this material may have been drawn from real life, I have no idea, but I do know I very much enjoyed Untimely Guest.

See also this great review of Untimely Guest by Margot Kinberg, at Confessions of a Mystery Novelist.
Posted by The Passing Tramp at 1:56 AM