Todd Downing was born in Atoka, Oklahoma in 1902.  Downing was a quarter Choctaw, the Popular Library informed readers in its paperback edition of Downing's best-known detective novel, The Cat Screams, and his paternal grandmother was a survivor of the Trail of Tears.

Downing attended the University of Oklahoma, where he received bachelor's and master's degrees.  He taught as an instructor at the university and during summers lived in Mexico and conducted guided tours there.

Not only was Downing fascinated with Mexican history and culture, however; he also was a voracious reader of detective fiction.  In 1933, he wrote Murder on Tour, his first of a series of detective novels mostly set in Mexico.

The Crime Club was quite emphatic that it saw The Cat Screams as something of an event:

"Only in exceptional instances is the first book of  a new writer on the Crime Club list made a Crime Club Book of the Month.  Here is the exception.  The author, as a creator of atmosphere, suspense, and horror, is reminiscent of Mignon G. Eberhart.  His plot, though exotic, is plausible and logical and, stylistically, he is far superior to the average mystery writer."

The bookplate (designed by Juanita Gould in 1933) featured below is found in a copy of The Cat Screams. 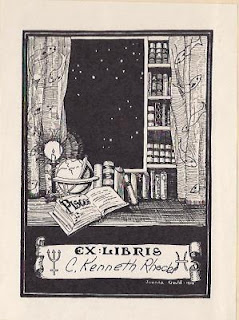 Downing's next mystery, Vultures in the Sky, set on an eerie train traveling from Texas to Mexico City (think Murder on the Orient Express with less plot and more tension) was also a Crime Club selection.

The Crime Club noted how The Cat Screams had "won high praise from the critics" and declared that its author was "rapidly making his way to the foremost rank of American mystery fiction writing." 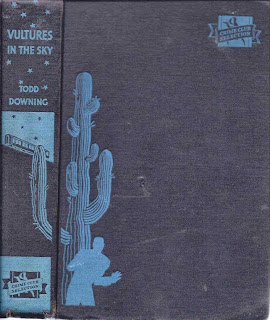 Downing went on to publish six more detective novels, including the excellent The Last Trumpet (1937) and Night Over Mexico (1938).  Most of these novels featured as investigator the intrepid U. S. Customs Agent Hugh Rennert.

Yet Downing's last novel appeared in 1941, before he had even reached the age of forty.  Downing, who had once seemed headed to a cosmopolitan literary life in New York City, instead retired not only from that life, but from teaching at the University of Oklahoma.

Downing returned to the small town of Atoka, where he taught high school and later the Choctaw language at Southeastern Oklahoma State University.  He resided in the old family home with his mother, staying on in the house after her death in the 1960s.

While being treated at the local hospital in early 1974, he died suddenly of a heart attack, at the age of 71.

Here is the rest of the series of Crime Club dust jackets for the Todd Downing detective novels.  I particularly like that bull on The Last Trumpet (about the death of a bullfighter) and the surrealistic quality of The Lazy Lawrence Murders.  But all are splendid.

Overall, Downing probably is most important in the history of the crime fiction genre for being a notable American "local color" mystery writer of the 1930s.  An admirer of Agatha Christie and John Dickson Carr, Downing attempted to put both atmosphere and narrative dash in his books, along with the Mexican "exoticism" for which he was most celebrated.