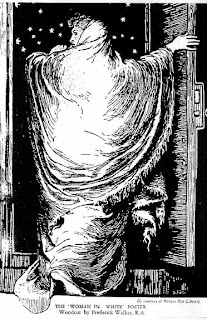 Braddon and Collins of course are very well-known writers today.  Benjamin Farjeon, like one of his sons, the Golden Age mystery writer Jefferson Farjeon (see my previous blog posts), has been largely--and undeservedly--forgotten.
All three of these works offer believable characters and intriguing and emotionally compelling situations, although they offer more "mystery" than fair play detection as the Golden Age understood it.

“The Mystery at Fernwood” and “Who Killed Zebedee?” are longer short stories (about forty and twenty-five pages, respectively; the latter is also known, more prosaically, as "Mr. Policeman and the Cook").
In “Fernwood” Mary Elizabeth Braddon effectively mines the Gothic tradition that had first been struck in Horace Walpole’s The Castle of Otranto (1764) and that perhaps produced it richest early lode of ore with Ann Radcliffe’s The Mysteries of Udolpho (1794). In some of Braddon’s triple-decker sensation novels, appealing mystery elements in my view are too much submerged in love stories, but that is not so with the lean and spare Fernwood.

In this tale, a young woman finds not only mystery but grave menace when she visits Fernwood, the decaying Yorkshire country estate of her fiancee.
“No, Isabel, I do not consider that Lady Adela seconded her son’s invitation at all warmly,” fatefully announces the heroine’s aunt in the first line of the story.

“Fernwood” is a rattlingly suspenseful tale (even if you pierce the veil of the mystery quickly, as you probably will) and a fine example of the grand and hallowed Gothic tradition that has extended right up to this day in such mystery genre works as Barbara Vine’s The Minotaur (2005). 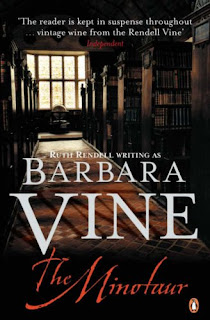 With its title and its setting (a lodging house full of eccentric characters), Wilkie Collins' "Who Killed Zebedee?" at first seems to have popped straight out of the pages of a 1920s or 1930s Golden Age short story collection, yet amazingly it was published in 1881. 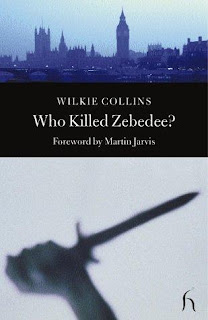 In the opening pages of the tale, a frantic cook bursts into a police station, armed with a doleful tale of murder at the lodging house in which she is employed. The victim is one John Zebedee, who was stabbed to death in his bed.

Suspicion immediately falls on Zebedee’s wife, a somnambulist. People fearing a repetition of another Wilkie Collins tale that shall remain nameless will be pleased to see other suspects emerge among the company of lodgers, most obviously the dandified Mr. Deluc. Desirous of helping the law is the nosy elderly spinster Miss Mybus, an interesting early incarnation of a mystery genre character type most strongly associated today with Agatha Christie’s Miss Marple.

The attention to police procedure and the thumbnail character sketches in “Zebedee” are strikingly  good, making one wish that the tale had been expanded into a full-length novel. As it stands,”Zebedee” is a disappointment as a tale of detection, with the solution coming essentially fortuitously.

To be blunt, “Zebedee” is more luckstone than Moonstone. Collins is more interested here in exploring character, however, and he does this very well indeed, even providing a surprisingly ambivalent ending in the modern fashion.

The only novel among these three works is Devlin the Barber, a potent admixture of mystery and horror elements authored by the prolific novelist Benjamin Farjeon (also father of, in addition to Jefferson, Eleanor Farjeon, the beloved children’s book writer).

Luridly advertised on London billboards with an illustration of a young woman bloodily stabbed by a seeming maniac, the book appeared the same year as the Jack the Ripper serial killings horrified England (what are considered to be the "canonical" Ripper murders took place in 1888 between the dates of August 31 and November 9; Farjeon’s work appeared in serial and book form later that year). Devlin the Barber seems quite obviously to draw on the Ripper killings, as well as the gruesome folk legend of Sweeney Todd, the demon barber.
Devlin the Barber was called a “disagreeable but certainly ingenious tale” when it first appeared and since then has customarily been deemed the best of Farjeon’s many fictional works (only a small number of which were of sensationalist nature). Three years before the appearance of Devlin, Farjeon had written Great Porter Square (1885), the first of several praised mystery novels. The man clearly had a talent for crime writing, even though Devlin surely to an extent has to be seen as an opportunistic effort (if an inspired one).

Despite its obvious linkage with Jack the Ripper, Devlin opens with only one slaying, that of a proper, middle class young woman who for some reason was keeping a secret late-night assignation. After she is found fatally stabbed, it is learned that her twin sister has disappeared (twins were quite popular in crime books before the stricter rules-making Golden Age frowned on them).

The young ladies’ wealthy uncle, lately returned from Australia, for no particularly compelling reason offers the narrator of the tale, an out-of-work, middle-class friend of the family, a grand sum to solve the case (naturally he has no faith in the police being able to do it).

The narrator soon finds that the murdered woman had a gentleman friend, but he seems like a winning young man (he is even wealthy and has a responsible guardian). The most striking event occurs, however, when the narrator is called upon for help by his former nursemaid, Mrs. Lemon (could this have been the mother of Hercule Poirot’s future secretary?!). It seems Mrs. Lemon has a very odd lodger indeed, a barber named Mr. Devlin….
Mrs. Lemon’s tale of her frightening lodger, which takes up over a fourth of the book (fifty of the Arno Press edition’s 190 pages), is a tour de force of horror narration. It is almost a disappointment when we come back to the mystery investigation. But now we have a new investigator of the heinous murder: Mr. Devlin himself! If you thought this novel was going to take the same turn of events as Marie Belloc Lowndes’ fine Ripper tale, The Lodger (1913), think again.

More could be said about this fascinating novel, but I will leave the reader to seek out the book for herself. I will simply add that, in contrast with some lesser Victorian tales of sensation, the narrative throughout Devlin the Barber is smooth and idiomatic, a reader’s delight. Even the cry of the murdered woman’s beloved is not nearly so melodramatic as the contrived speeches one often finds, for example, in the works of the noted American mystery writer Anna Katharine Green:

"Neither will I rest till I discover the murderer of my darling girl! And when I discover him, when he stands before me, as there is a living God, I will kill him with my own hands!”

As the plaint of a grieving young Victorian-era man it rings true to me.

The long section of narrative that Farjeon gives to Mrs. Lemon is especially impressive. Like the better-known Braddon and Collins, Farjeon was an effective spinner of tales; and he very much deserves at least a modest revival.

Anyone wanting a good murder story from the Victorian era is advised to seek out these works by Mary Elizabeth Braddon, Wilkie Collins and Benjamin Farjeon. They may be old, but they still speak to us today. During the last decade “The Mystery at Fernwood” and “Who Killed Zebedee?” have been reprinted in attractive editions by Hesperus Press, an admirable publisher of shorter literary classics. Devlin the Barber merits inclusion in this eminent company of Victorian writers.

Posted by The Passing Tramp at 8:55 PM