Phoebe Atwood Taylor (1909-1976) was not by any means the only American local color mystery writer of the Golden Age of detective fiction, but she was perhaps the most popular of them in her day; and she remains in print even now, when the sort of New England cozy mystery that Taylor's Asey Mayo Cape Cod series typified thrives.  The long-running television series Murder She Wrote (1984-1996), for example, seems to owe more to Taylor than to Agatha Christie.

It looks like about half of Phoebe Atwood Taylor's twenty-two Asey Mayo mystery novels are currently in print in paperback or Kindle form, courtesy of Countryman Press.  Apparently out-of-print, however, is Banbury Bog, the thirteenth Asey Mayo mystery and a typical example of the later books in the series.

Over time Taylor tended to move away from formal investigative detective novels to more of a whodunit hugger-mugger style.  This is to say, there is a great deal of incident in the Asey Mayo mysteries.  A great deal!

After the first few chapters, most of Banbury Bog consists of Asey, amateur detective extraordinaire, dashing about from place to place, evading bumbling police and fiendish murderer alike, while trying to solve the dastardly crime--though just exactly how he's accomplishing this often is not quite clear.

When the solution comes, it is what Jacques Barzun and Wendell Hertig Taylor call huddled: a great flurry of information appears in the last chapter, along with a great deal of explanation, some of it rather implausible (if I entirely understood it).

Is Banbury Bog truly a fair play detective novel?  Not exactly (though I did quite like one clue).

In Atomic Renaissance: Women Mystery Writers of the 1940s and 1950s, Jeffrey Marks notes that Taylor wrote Banbury Bog in twenty days!  I'm no Sherlock Holmes, but this may explain looseness in plotting.

Yet I enjoyed the book.  Like other Asey Mayo mysteries, Banbury Bog is filled with local color and good humor, both things at which Taylor excelled as a writer.

Banbury Bog concerns one Phineas Banbury, who with his wife Lu and daughter Jane is visiting his family's ancestral grounds of East Weesit, Cape Cod, Massachusetts when the tale begins.  The family is staying at the guest house of Tabitha Sparrow, one of the declining town's leading citizens.

Banbury is one of those Midwestern millionaires (pies and tarts) whom one so commonly finds in Golden Age American mystery fiction.  A generous sort, he decides to settle down in Weesit and economically revitalize the place.

Things go splendidly at first, but then someone poisons Banbury's pies with arsenic and most of the town gets sick.

Much of Weesit turns on Banbury and he is arrested by the police.  There's a bit of a commentary here on mobocracy, I think.  Here's Asey's friend Doc Cummings on the subject: 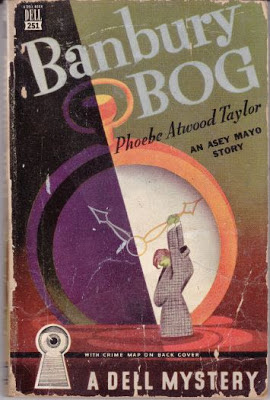 "What're they trying to do?  Now there's a man who's put a town on its feet.  He's done more for Weesit in two months than anyone ever did in twenty years....He hasn't done anything that wasn't all to the good.  He hasn't strutted around and asked for praise.  He's given all the credit to the people and the selectmen.  Now why in hell did somebody go and stick arsenic in his tarts?....[A]nd, furthermore, in spite of what he's done for 'em, and what a fine man they thought he was yesterday, do you know that every last person in that benighted town of Weesit believes that Banbury poisoned the tarts himself?"

A mob of townspeople has even thrown stones at the Banbury house, breaking windows.

As Jane Banbury worriedly comments to Asey, "Even when Dad had the strikes [at his bakeries], no one threw any stones.  Why, they even took time off the strike to bake dad a birthday cake!"

Worse yet, one of the selectmen is found  murdered and Banbury is blamed for that too!  And it looks like the police may arrest the Banbury women as well!

Obviously we have another job for Asey Mayo.

An extended scene on the confusion between Banbury and cranberry gets kind of tiresome, admittedly.  My tenth-grade English teacher three decades ago always used to say, puns are the lowest form of humor--my, though, aren't they hard to resist!

Still there are really funny bits, like when Asey is trapped by the murderer for hours in an old house cellar with Lu and Jane Banbury (Jane, by the way, unfortunately calls her parents Popsie and Momsie) and Lu advises Jane to think of hoop skirts to avoid getting nervous.

Okay, you have to read it in context.

Okay, it doesn't really make sense in context either.

But that's what makes it funny, you see.  Banbury Bog is like something Grandma Moses might have painted had she tippled a bit too much cordial.

I also found out about sea clam pie and huckleberry slump by reading this novel, and how else would that have happened?  We don't have such things in Tennessee.

There are two rather callous murders, of nice enough people in the town, but Taylor doesn't allow us to to dwell on such unpleasantness.  There is simply too much going on!  Banbury Bog is definitely one cozy little jog.
Posted by The Passing Tramp at 9:37 PM