A public spat took place nearly a century ago in the pages of the New York Times between novelists Anna Katharine Green (1846-1935) and Gertrude Atherton (1857-1948).  Green, as we know, was a popular mystery writer, while Atherton was a well-regarded writer of "mainstream," or "straight," fiction.

The dispute between the two authors was over women's suffrage (Green was against it, Atherton for it), but it is of special interest to us here because Atherton in her letter took time out to lambast not merely Green, but the entire genre of detective fiction with which Green was so strongly associated.

Two years after the publication of her short story collection The Golden Slipper, which told of the investigations of her female detective Violet Strange, Anna Katharine Green had further things to say about the role of women in public affairs.


In "Women Must Wait: An Appeal to the Men of This State to Vote Against the Woman Suffrage Amendment," a long letter published in the New York Times on October 30 1917, Green announced her firm opposition to conceding American women voting rights.

Green warned men that giving women the vote could one day result in "a Congress divided equally between men and women...with the vague possibility of a woman in the executive chair."  This as "millions of our men go to war."

"Do you like the prospect?  Are you willing to see that day?" Green asked men.  "If not, pause and think before you cast your vote for equal suffrage."

Even is she were to concede that women possessed a "right" to vote, Green added, she believed that a "true woman waives her rights in times of stress, whether that stress be domestic or public."

Green complained that already too many women had invaded the male sphere, in her view de-feminizing themselves, if you will:

"The graces which one once adorned [Woman] are fading from our sight.  Her modesty is gone.  It is the young man who blushes now and not the girl, or so I hear from some of our City Court Judges."

Granting women the vote would only further destabilize gender relations, promoting serious discord between the sexes and marital disharmony.

Referencing the suffragists themselves, Green insisted that "nothing in the way of business or pleasure is denied the women of this state.  All occupations are open to them."

Women "can even for months insult our President and humiliate the nation as no body of men would have been allowed to do for a day," Green added witheringly.

Despite being a hugely successful popular author as well as the primary breadwinner in her own family, Anna Katharine Green clearly believed in the idea of separate spheres for men and women (this is associated with the concepts of true womanhood and the cult of domesticity).

However, many women at this time disagreed with Green about the proper role of women in society (men too, I should note, for the New York suffrage measure passed).

One of these dissenting women was the  author Gertrude Atherton*, who penned her own letter to the New York Times in rebuttal to Green.

Atherton's letter is of special note here because Atherton took time to attack Green on literary grounds as well as political ones (in fact, she linked the two).

Noting that Green had, since the publication of The Leavenworth Case four decades earlier, established herself as one of the most prominent mystery writers in the world, Atherton praised Green for "her fecundity of invention" in devising "murder-detective stories" that were "complicated, skillful, thrilling."  Very few women writers, Atherton pronounced, had "Green's particular form of fictional ingenuity."  Indeed, declared Atherton, "Mrs. Rohlfs [Green's married title; her husband was noted furniture designer Charles Rohlfs] is as inventive as any male Yankee that ever lived."

Yet, Atherton added, getting to her main thrust, "therein lies the secret of her limitations."

With "plots bubbling out of her like steam out of a geyser," asserted Atherton, Green "has never been obliged to study human character.  The great army of readers of the detective story demand the nondistracting puppet and abominate psychology."

Green, concluded Atherton damningly, had spent the last forty of her seventy-one years not "in the main current of life" but rather "in a backwater."

This is a splendid example of the kind of intellectual disdain that the mystery genre was (and still is) subjected to in some quarters.  It is the notion of "mere puzzles" that I write about in my book Masters of the "Humdrum" Mystery.  To the contrary of Atherton's assertion, I think it's clear that Green in her books did concern herself with human character (and I'm not even an admirer of the prosy literary stylings of The Leavenworth Case).

The Doctor, His Wife and the Clock, to cite a Green tale last reviewed here, looks at jealously and how it can destroy a marriage.  There is serious intent behind this novella, whatever one may think of its particular merits.

It would not surprise me to find that Atherton might actually have been generally unfamiliar with Green's writing.  In those forty years since the publication of The Leavenworth Case, had Atherton really read anything by Green (besides, perhaps, The Leavenworth Case--about every American reader in the nineteenth century seems to have read that!)?

Interestingly, a year previous to her newsprint altercation with Green, Gertrude Atherton published a novel, Mrs. Balfame, that some reviewers called a detective story or a mystery.  However, it sounds more like what today we would call a psychological crime novel

Even were Atherton right that Green only concerned in her fictional work herself with portraying nondistracting puppets (in order to mollify a readership that abominated psychology), would this necessarily disqualify Green, or any other such mystery writer, from having intelligent opinions on public issues (to be sure, I imagine most of us disagree with Green's particular views on women's suffrage)?  That seems to me quite an extravagant claim.  But it does show why classical mystery writers sometimes exhibited a sort of inferiority complex (hey! psychology!) about their work. 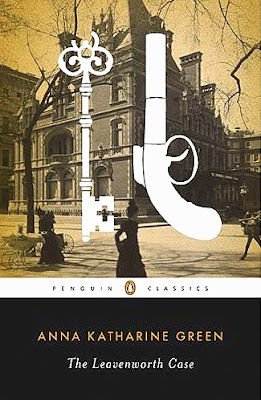 As another letter writer to the Times put it, Atherton had clearly attempted "to belittle Mrs. Rolhfs"--in part simply for being a mystery writer!  This was not the first time this sort of thing had happened, nor, sadly, would it be the last.  Far from it.

However, Green may have had the last laugh.  In 2010 Penguin Books, under its Classics imprint, republished Green's milestone mystery, The Leavenworth Case, in an attractive new edition, with an introduction by the esteemed writer Michael Sims. Will the once much acclaimed Atherton get the same treatment one day?

Perhaps I shall go and make the acquaintance of a certain Mrs. Balfame....

Note: In a twist of sorts, in later life Gertrude Atherton befriended San Francisco writer Mary Collins, whose mystery novel The Sister of Cain (1943) is dedicated to Atherton.  See my review.
Posted by The Passing Tramp at 3:43 PM