A Royal Mystery: Give a Corpse a Bad Name (1940), by Elizabeth Ferrars

Today I'll be looking at the debut detective novel by the prolific Elizabeth Ferrars (1907-1995), one of our very last Golden Age authors.  Give a Corpse a Bad Name was published at the very tail end of the Golden Age, as traditionally dated (c. 1920-1940). I've written about Elizabeth Ferrars on the blog before, here and here, but this is my first review of one of her many novels, though I have read about all of them.  Some of Ferrars' books are pedestrian, to be sure, but Corpse is first-rate.  I have read this now for a second time and quite enjoyed the rereading.

Late in her writing career, which lasted over half-a-century, Ferrars introduced two series amateur sleuths, con man Felix Freer and the elderly scientist Andrew Basnett (the latter based on her husband); yet she also started out her career with one, or rather two: the detective duo of the freelance journalist Toby Dyke and his mysterious friend George.

The first of the five novels in which they appear is a classical English village and country house mystery, set in Devonshire.  With an interesting plot, nicely etched characters and some clever writing, Corpse deserves honorary "Crime Queen" status, as it reminds one very much of Christie, Sayers, Allingham and Marsh. 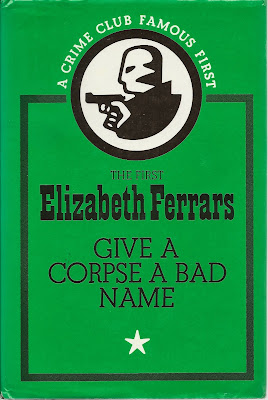 The novel begins with forty-something widow Anna Milne showing up at the police station in the village of Chovey--where she has moved, with her nineteen-year-old daughter Daphne, from South Africa--to explain to Constable Leat and Sergeant Eggbear (love that surname--has anyone ever known an Eggbear?) that she has just run down and killed a drunken man who staggered in front of her car as she maneuvered it between a pair of humpback bridges (yup, this is rural thirties England, all right).

The dialogue among these characters in the second chapter is wonderfully done and there's a brilliant little bit involving a cigarette lighter that you will just have to read for yourself (fortunately this book has been recently reprinted; see below).

Initially police seem satisfied that the death of this man--who is identified as the scapegrace, long-departed son of the Sir Joseph and Lady Maxwell, the owners of Chovey Place, the local big house--is accidental.  But then poison pen letters start appearing, and they seem to implicate Anna Milne in murder!

In a series of coincidences we come to expect in series detective novels, Toby Dyke, a freelance journalist and amateur sleuth, just happens to be vacationing in Chovey with his mysterious friend George, and, what do you know, he just happens to be a friend of Sergeant Eggbear, who naturally allows Toby to horn in on the case.

Toby Dyke is thin and dark-featured, with a black forelock that is always falling forward over his face, a beak nose, a long chin, and an impulsive nature.  George is round, blonde and cherubic-- though it's strongly suggested he's an ex-con (one of the amusing bits in the novel is that he always gives an different answer when asked his surname, always beginning with a "P"--this has a cute payoff in the final lines of the book).

Toby sticks his nose into the affairs of a number of people--including a modern writer cousin of sorts of the Maxwells, Adrian Laws; Sir Joseph's moody brother, Major Stuart Maxwell; and various colorful villagers and servants, including Anna Milne's religious enthusiast cook.  He eventually finds a solution to the perplexing events, but, in what turns this novels from a good effort into a great one, in my opinion, there is a brilliant twist, provided by the self-effacing but very clever George.


Ferrars dropped Toby Dyke as a series detective in 1942 after just five novels, supposedly because she had gotten thoroughly tired of him already; yet through George P-??? she was already satirizing the brilliant gentleman detective tradition associated with such authors as Dorothy L. Sayers and Margery Allingham. Sure, Wimsey had Bunter and Campion had Lugg, but the gents remained in the saddle as the true detectives all through the series.  In Ferrars' Toby Dyke novels, it's George who steals the sleuth show.

Besides the fun of her satirical treatment of classic detection tropes, Ferrars provides readers with some well-drawn characters and clever writing.  Best of all the characters in Give a Corpse a Bad Name is Anna Milne, a complex, modern, middle-aged woman who is really the protagonist of the novel, despite the sleuthing presence of Toby Dyke. Considered "fast" by the village (cook has given notice, mind you), Mrs. Milne in fact is a figure of greater nuance than is typical of detective fiction in this period.

As for the writing, I will quote just this one passage, concerning the amateur performance of an Edgar Wallace type crime trailer play, with a diabolical Asian villain:

The play was a thriller called The Return of Mr. Chan.  Mr. Chan, it appeared, was a suave and insinuating Chinese with a liking for inserting daggers with jeweled hilts between the shoulder-blades of public-school-educated Britons.

The sardonic touch here is great, particularly the last words, in which Ferrars dismisses Bulldog Drummond and his smug ilk.

Oddly, Give a Corpse a Bad Name was never published in the United States (the other four Toby Dykes were however), and the British Hodder & Stoughton edition is extremely rare (a good only copy without a dust jacket currently is being offered for $750).

Fortunately the novel was reprinted in paperback by Penguin in the 1950s, in hardcover by Collins in the 1980s and in the last few years in paperback by Langtail Press.  So if you like the Crime Queens and English village and country house mystery, try it out!  I think you'll like it as well.
Posted by The Passing Tramp at 6:38 PM