Mischief in the Offing (1958), by Clifford Witting

Clifford Witting (1907-1968) was an English author who published sixteen detective novels between 1937 and 1964.  Although his books often are somewhat unorthodox by traditional standards, in them Witting, one of the youngest mystery writers of the Golden Age generation, typically offers interesting situations, appealing local color and some fine wit.  I have read twelve of the sixteen now and enjoyed most of them.  In all but two Witting novels his series cops Charlton and Bradfield appear, either together or singly. 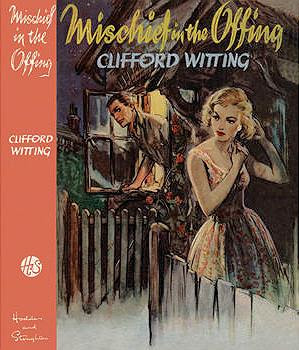 Mischief in the Offing is Witting's first non-series offering.  It appeared after a gap of five years in his novels, the longest such of his writing career (there was another significant gap, between Measure for Murder, 1941, and Subject--Murder, 1945, but World War II, in which Witting served, accounts for this; I have no idea why there was such a long gap in the 1950s).

Mischief in the Offing starts off with a bang as a beautiful young woman, Kay Forrester, comes to the door of the Riverside Cottage, the Wilchiston, Sussex, home of writer John Denman, begging to be let in.

Once admitted to the cottage, Forrester tells Denman a tale of an attempted assault made on her her by a certain unsavory character. Denman is dubious about her story, but then someone fires a bullet through the window!

Denman goes for the police, but, when he returns with them, he chivalrously suppresses the full story of the young woman's role in the affair.  After the police, who are highly dubious about his story, leave, Denman finds that Miss Forrester has disappeared.

Now, at this point, you might be forgiven for thinking you are reading a swift-moving tale of criminal suspense, but in fact the narrative at this point becomes rather lesurely, dropping Denman and introducing a bunch of new characters: police, villagers and visitors.  Jacques Barzun and Wendell Hertig Taylor, though admirers of Witting, complained in their mammoth A Catalogue of Crime, of excessive local color in this one.  I liked the local color myself and I didn't mind the slower pace.  For me a great deal of the appeal of the novel is in its portrayal of village English life over a half-century ago.


There are some appealing characters too.  I especially liked Police Constable Arrow and his mother, locally dubbed Police Sergeant Arrow, on account of the way she orders about her son.  I was much amused by this pair and wanted to see more of them throughout the novel:

"I'm a-comin with you," she informed him.  "You ain't to be trusted."
The discomfited sergeant looked at John, then back at his mother.
"But Mum, it's dangerous.  This chap's armed."
"Then it wants a woman to deal with 'im."
She unhooked her parasol and it seemed to take on the attributes of a lethal weapon.
"Look, Mum--"
"Don't nabble, Sydney.  Got yer truncheon?"
"Yes."
"Notebook and pencil, flashlamp, penknife?"
"Yes, Mum."
"Tape measure?"
The worm essayed a turn.
"I shan't want a--"
"Don't be daft!" she retorted, harshly scornful.  "Won't you ever learn?  Tape measure--and be sharp about it!"

This could be a Monty Python bit!  Honestly, these two should have been series characters. There's also some enjoyable bits with a television scriptwriter couple who view real life situations in terms of script scenarios.

The title is a pun, for this a boat named Mischief in the offing.  Smuggling plays a great role in the tale, with many references to Wilchiston's famous native son outlaw of the early nineteenth century, Richard Tapsell, aka "Slippery Dick."  In an author's note, Witting tells us that Wilchiston is the real life village of Alfriston and that the inn in the novel is the real life Market Cross House, or The Smugglers' Inn.  Owned by a notorious Alfriston smuggler, the house has "21 rooms, 47 doors, six staircases and secret hiding places in both cellars and roof," having been "designed to confuse Customs and prevent capture."


There are really two mysteries in the novel.  The solution to one is clued--albeit thinly.  The solution to the other comes as a tremendous surprise (however, I don't believe Witting bothered, really, to clue it).  There's also a nice little revelation in the last line (incredibly and idiotically revealed on the front flap of the Hodder & Stoughton dust jacket!).

I think Mischief in the Offing is quite an enjoyable story and I hope that it can be reprinted someday, along with other Witting novels (most of Witting's novels were not reprinted in the United States and are very rare today).  Clifford Witting did have a daughter and two grandchildren, so presumably there's someone out there who could help this happen.

See also the two reviews John Norris has done of Witting novels.  All in all, Witting is a noteworthy figure from the Golden Age of English detection who deserves to be better known.
Posted by The Passing Tramp at 11:25 AM