The Return of Patrick Quentin! Crippen & Landru's The Puzzles of Peter Duluth (2016)

I'm pleased today to be able to post the cover art for The Puzzles of Peter Duluth, publisher Crippen and Landru's collection of all the Patrick Quentin short fiction devoted to the exploits of Peter Duluth and his wife Iris, Quentin's series characters in nine novels, including the famous Patrick Quentin "Puzzle" series. The book will be released in just over a month, on March 25.

"Patrick Quentin," as I've discussed before on this blog, for much of his crime writing career was actually two British expatriates, Richard Wilson Webb and Hugh Callingham Wheeler.  (Wheeler later continued the series solo.) 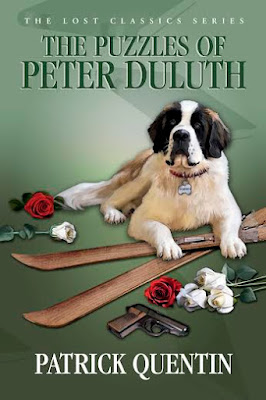 Patrick Quentin was one of the most popular and critically-acclaimed authors of mid-century American crime fiction, so it's a bit "puzzling" why his novels remain out-of-print (and have been so for about a quarter of a century), when so many less prominent vintage mystery writers are being brought back into print.  This lapse makes Crippen & Landru's new book even more welcome.  The premier publisher of short crime fiction, Crippen & Landru can always be counted on by mystery fans.

Puzzles collects two dramatic Peter Duluth novellas and a couple of short stories, including the very charming "Puzzle for Poppy."  Three of these works were written by Webb and Wheeler in the 1940s, while the last was written by Wheeler solo in the 1950s.

The interesting collection of objects you see on the cover all are integral to the stories contained therein.  A gun surely comes as no surprise to readers of crime fiction, but a Saint Bernard? Read it and see.  (A hot dog could have been included on the cover as well, but that would have been even more puzzling perhaps!)

I wrote a 3000-word introduction to Puzzles, and there's also an amusing postscript by Mauro Boncompagni and a wonderful afterword by Joanna Gondris, Hugh Wheeler's great-niece. Scholarship finally is making great strides with Webb and Wheeler (I have a new essay coming out on them later this year); let's hope a publisher catches up and reissues the PQ novels, one of the major bodies of American crime fiction.

In the meantime, you should tide yourself over with The Puzzles of Peter Duluth, a collection of really first-rate short crime fiction by a couple of masters of mystery.  Doug Greene at Crippen & Landru did a great job getting this book put together.  On a personal note, I wrote Doug, who also is the biographer of John Dickson Carr, what you might call a fan note at Crippen & Landru about twenty years ago, back when I was graduate student; and it's exciting after all these years to have had the chance to write an introduction to one of his books!
Posted by The Passing Tramp at 2:20 PM