Like Moths to a Flame Does Murder Draw Us: Wings of Mystery (1929), by William Gavine

"I have now--I think I am justified in saying it--a unique collection of tropical butterflies and moths, existing too under conditions as near to their natural ones as I can contrive.  My incubation methods too have been very successful--if only the death rate were not so very high." 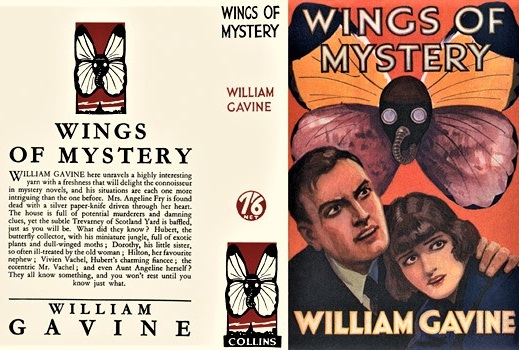 Come back with me, dear readers, to 1929 and those halcyon days of fictional murder, when, around this time, mystery fans were enjoying reading about unpleasantness at the Bellona Club and crime at Black Dudley.  One forgotten story, however, concerns that spot of bother which took place that year at Dasholm House, the lovely Georgian country home of Mrs. Angeline Fry, wealthy "elderly" widow--she's 57, but I'm just quoting the characters here--and a fervent philanthropist of international pacifism, a common cause in the Twenties, when much of the world was wearied by war.

When the novel opens a crisis is coming to an unpleasant head as tensions escalate among Mrs. Fry and her relatives at Dasholm House.  These latter people are her butterfly and moth collecting nephew, Hubert Mervyn; Hubert's rambunctious 13-year-old sister, Dorothy; and a visitor, Mrs. Fry's other nephew, Hilton Amery, a Great War veteran who at the moment is rather on his uppers. Also in the mix are Dorothy's devoted governess, Miss Saunderson; the aged butler, Mr. Darrell; the inevitably Scottish gardener, George Galbraith ("I was head gardener tae puir Mrs. Fry," he explains, Scottishly, after the murder); Hubert's valet, Bunten (a poseur not at all like Bunter, let alone Jeeves); the pacifist footman, Davis; and Mrs. Fry's maid, Edith Hoskins.

Inquisitive young Dorothy seemingly can't stay out of Hubert's hothouse, wherein he keeps his precious collection of exotic butterflies and moths.  Hilton, however, cares nothing for the collection--or for Hubert, whom he considers a spineless jellyfish in the guise of a man.

Hilton explains to Hubert that after the war he associates white butterflies not with guardian angels, as traditional folklore has it, but with grim carrion death:

"Sorry, old chap.  "My apologies to your proteges....I loathe butterflies, especially white ones.  I saw the brutes swarm too often on the dead in the gullies of Gallipoli.  They haven't much association with the fairies for me now...."

Truth be told, Hilton doesn't think much either of his aunt, Mrs. Fry, though he is hoping that the widow of rolling-in-it coal and iron magnate Jabez Fry will bestow some financial largess upon him, as she lavishes it among the peace groups whose cause he despises.  When Mrs. Fry speaks of war as abomination he thinks:

Abomination!  These sheltered women who talked so glibly.  These theorists.  His men facing the crackling scythe of the Turkish machine-guns; four out of forty reached the objective that day.  The scream and blast of Asiatic Annie's shells.  Egypt and its drouth and fatigue and hear.  Palestine and its rain and cold.  France at last and its hellish artillery fire.  Hunger and filth and stench and all that was utterly damnable and yet--There had been good times too and there were things worth fighting for. Kids like Dorothy, their safety and well-being, gentle women like his mother, beautiful things like--

Like, for example, Hubert's lovely young fiancee, Vivien Vachell, with whom Hilton has fallen in love at first sight.  Something that happens a lot in this book! (See below.)  Most bothersomely, however, beautiful Vivien's father, Austin Vachell, with whom Vivien resides nearby, is a pacifist crony of Mrs. Fry who vehemently denies to Hilton having served in the late war, though Hilton thinks he bears the hallmarks of having been gassed.

It transpires that although Mrs. Fry is a pacifist in theory she is not one in practice, for she is a believer in corporal punishment and never thinks of sparing the rod when Dorothy gets into trouble (which the boisterous girl regrettably does with frequency). After hearing Mrs. Fry beating her wailing niece, chivalrous Hilton confronts his aunt:

In addition to the love at first sight matter, this is the sort of book where people get called brutes, beasts, bounders, hounds, rats, worms, cads and, when inspiration runs out, just plain scoundrels.

On more than one occasion the police are denounced as infernal priers and ordered peremptorily out of houses.  This is a tale where emotions run sky high, in short, and there's a touch of the old sensation novel melodrama.  (Thank goodness we have fair play today, incidentally, and the wealthy never expect, nor receive, favorable treatment from the law!)

With the sad lack of foresight of the classic mystery murderee, Mrs. Fry informs Hubert that she is going to write Hilton into her will, reducing Hubert's and Dorothy's shares, and for good measure she forbids Hubert to marry Vivien Vachell, without providing any explanation.  The next night (August 4, the anniversary of Britain's entry into of the Great War), after her confrontation with Hilton over Dorothy, she orders Hilton (peremptorily, of course) out of the house, adding that he is henceforth Out Of The Will.  (Call her a brute, will you?!)

Well, you know how this script goes: Mrs. Fry is discovered dead by the butler on the floor of  her study on the evening of all those emotional theatrics. She's been stabbed to the heart with a silver paper knife!  There is in the room too, not  awhite butterfly, but a great singed moth (epiphora bouhiniae), defunct by a candle.  Is the brown moth a clue, or just a red herring?  "As an entomological stray, he's a gem," pronounces the Scotland Yard man put in charge of the case (see below).

Why rich people with encroaching relations in vintage mysteries keep such tempting deadly things around their houses I'll never know, but invariably their mansions are littered to the rafters with paper knives, letter openers, ornamental Malay kris hanging on the walls, blow pipes with curare-tipped darts brought back from that quaint scenic trip up the Amazon, heavy fireplace pokers perfectly suited for braining, fully loaded antique dueling pistols, you name it--they never learn!

So into the picture come silkily insinuating attorney Mr. Branscombe, the late Mrs. Fry's lawyer; tersely sardonic Dr. Charnock, who was something in the chemical warfare line in the late war; bucolic local Inspector Bourney, a dunderhead who drops his aitches under stress; and, because the locals are afraid to take responsibility for the case, the man on call from Scotland Yard: handsome, young Detective-Inspector Miles Trevarney, so smooth and charming he's a veritable Alleyn-in-waiting, though he's not quite so infernally precious as Ngaio Marsh's posher-than-thou sleuth.

DI Trevarney's claim to Great Detective status soon goes off the rails, however when he too falls head-over-heels in love with Vivien Vachell--that makes three blokes now, including her original fiancee--and he starts to see the case in terms of how Vivien can be cleared, whatever she may have done. To be fair to Trevarney, he doesn't think Vivien actually can be guilty of murder (maybe she's just an accessory after the fact or something), because, well, because she's just so darn beautiful.  Trevarney wouldn't have lasted long in the Garden of Eden, is all I can say.

All this doesn't fly with stolid, happily married Inspector Bourney (with seven children no less), whom I started to like rather better at this point.  I guess I'm just not a romantic.

Overall, however, I would have to say this is an excellent example of the Twenties British mystery, and I have recommended it for reprinting to the Collins Crime Club, who originally published it, nearly 90 years ago.  It works up a good situation, both emotionally and ratiocinatively (I do hope that's a word), throws in a nice couple of twists and ends with a touch of poignancy.  Modern readers may find the book a bit stolid in places, but in that respect it's largely of a piece with its time, at least in many mysteries that were being published by British men at the time (the misanthropic Anthony Berkeley, certainly, excepted). 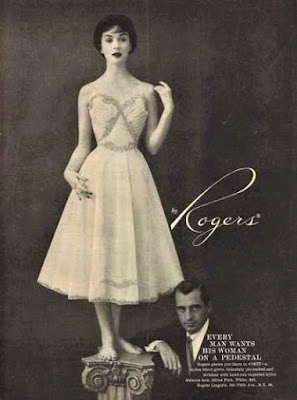 The women characters--at least the ones who aren't servants or, well, "old," like Mrs. Fry (she is, I must reiterate, 57 [!])--are rather put on pedestals by the men of their class (though, to be sure, the ladies scamper down from them on occasion). The men are sentimental indeed not only about Beauty Incarnate (Vivien Vachell), but Young Kiddies (impulsive Dorothy). However, at least the author manages to work up genuine interest in the characters, which is more than you can say about many crime writers of the period.  I also liked the bits on butterflies and moths, which is done without all the "look what I know!" fancy pants footnotes in which S. S. Van Dine lengthily indulged in his books, like The Bishop Murder Case, which appeared the same year as Wings of Mystery.

The use in the novel of the long nightmare that was the Great War was interesting as well--though ultimately it seems to me that the author is sentimental about that too.  However, the novel shows that not everyone who admitted the horrors of the First World War necessarily regretted the war itself.

But who, some may be wondering, was the author of Wings of Mystery?  Who was William Gavine, apparently the author of this lone mystery?  My theory is it wasn't William Gavine.  More on this paradox next post!
Posted by The Passing Tramp at 12:32 AM