As I discussed in an earlier post, British mystery writer Anne Morice's family history was like something out of a classic British mystery, so it's no surprise I suppose that she ended up writing classic British mysteries herself.  Although she's often placed in the modern "cozy" category with all manner of others writers, she's rather a different sort from many modern cozy writers I have read, like M. C. Beaton, as there's actually a lot of clueing going on, amidst the chatting and the sherry drinking and the copious droppings of "my dears" and "darlings."  Additionally there's much more emphasis on bright and brittle repartee than there is on romance.  If Noel Coward really did base a hit song on the activities of Anne Morice's mother and elder sister, I can well believe it.  The world of Anne Morice's books is Noel Coward's world. 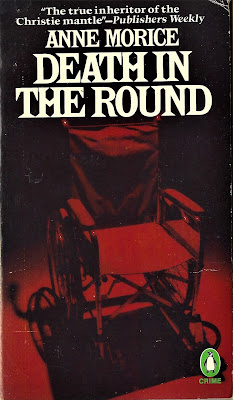 Death in the Round (1980) is one of the most highly praised Anne Morice mysteries.  It was her only title reprinted by pb by Penguin, which on the cover carried blurbs comparing Morice to Christie ("the true inheritor of the Christie mantle") and Ngaio Marsh ("Morice, like Ngaio Marsh...writes tongue in  cheek but with great care").  At the time when this pb was published (1981), Christie had only been dead for five years and Ngaio Marsh was still alive and kicking (and writing), so this sort of praise no doubt carried great currency with fans of classic British mystery.

And frankly it's more persuasive than all those blurbs from the day claiming that PD James and Ruth Rendell were the "new" Agatha Christies.  Anne Morice probably even deemed it a genuine compliment to receive such praise, which is more than did James and Rendell, who thought they were, well, really rather considerably better than Dame Agatha, thank you, and didn't want to be compared with her.

Although the Golden Age Crime Queens--most often listed as Christie, Marsh, Dorothy L. Sayers and Margery Allingham, but add or subtract as you see fit--often are called "cozy," I tend to think they don't really quite fall into the modern cozy school, though obviously there are many similarities.  Aside from the fact, I think, that the Crime Queens tended to put more emphasis on intricate plotting and clueing, there's a certain formality to the Golden Age gals that I think is missing from in the modern cozy.

I can't help thinking that the Crime Queens would find modern cozy mystery (and the modern world for that matter) rather on the sentimental side--a tad too touchy-feely, if you will.  Just look at their own personal relationships with their spouses and their children (when they had them), for example.

Allingham didn't have children in her marriage with a charming childhood friend and caddish compulsive adulterer, Youngman Carter, nor did Marsh and Josephine Tey and Gladys Mitchell; (the latter three women never married and their sexual identity remains elusive today), Sayers had an illegitimate child whom she never acknowledged as her own to him as well as rather an emotionally unsatisfactory marriage in many ways; Georgette Heyer had one son with whom she seems to have been, by our standards today anyway, rather stiff and formal (though to be fair she seems to have been that way with most people), and we all know about Dame Agatha's first marriage, the disastrous one to Archie Christie, who deserved all the embarrassment and ignominy he got over his mystery writer wife's "disappearance" in my view!

But, in happier marital days, didn't Agatha and Archie go a year-long round-the-world tour, leaving their two-year-old daughter Rosalind behind with her mother?  I just don't see modern couples doing that, assuming they could scrape the money together in the first place. 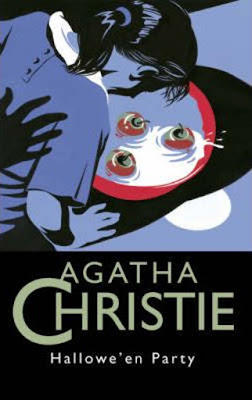 Christie's supposed to be ever so "cozy" in her books yet, as the late mystery writer and critic Robert Barnard has pointed out, literally anyone can be the killer in them [CHRISTIE SPOILERS COMING UP BRIEFLY BUT I BET YOU KNOW THESE ALREADY]: the sweet old lady, the pretty young ingenue, the bumbling Watson, the heroic detective and the "innocent" young child (like Rosalind) all committed murders in her mysteries, some of them really remarkably nasty ones too.  And literally anyone can be murdered too!  Look how unsentimental Christie and her characters are about the actual bumping off of not one but two children--a sister and brother no less--in her 1969 mystery Hallowee'en Party (There is another child threatened as well, which is of more concern.)

I can't imagine modern mysteries being so casual about child murders.  Certainly it ain't quite cozy!  Indeed, I find it to the contrary highly sinister, reflective of rather a cynical world view--or what the Crime Queens might simply term being "realistic" and not "soppy" about human nature.

It's this quality I sense in Anne Morice's books.  Of course Anne Morice was born in 1916, making her much closer in age to the Crime Queens.  If she couldn't remember the end of the Great War (a century ago this month), she could have certainly recalled the Jazz Age, bright young things, Mayfair, Soho, Chelsea, and the West End in the Thirties, great houses and quaint villages, all the things the Crime Queens were writing about between the wars.  Her mother, a strange fantasist self-dubbed Lucy Glitters, could have been a character in a Golden age detective novel, an Allingham probably.  As kacper of the Howards Bookend blog (Good name!), a commenter here, has noted:

It's funny because her novels are lighthearted and the continuing characters are very appealing, but I do think her very dysfunctional background (about which I had no idea until now) can fit in with her fiction.  Most of her novels do feature dysfunctional, unappealing upper-middle-class and rich people, and I can think of several Lucy Glitters-esque characters.

I think this is quite true.  Although the Morice mysteries are lighthearted there are a lot of nasty people in them, when you think about it.  And certainly there's not a lot of love and "soppy stuff" going around.  Tessa Crichton, Morice's actress sleuth is, I think, supposed to be a young woman in her twenties, but she is so poised and fluent (certainty more so than the twentysomethings I knew in the US back then), that I can't help but think of her as someone somewhat closer in age to the author, who was 54 when she started the series.  Tessa has an attractive policeman husband--Robin, a Detective-Inspector in the CID--but these two don't waste time on mushy love passages, they get right down to the nitty and the gritty of crime solving.  Tessa herself is decidedly unsentimental about the murders which she encounters with alarming frequency.

In Death in the Round Tessa Crichton for a season joins the Rotunda Theatre Company, which was founded in Dearehaven, a coastal city in Dorset, by elderly stagestruck heiress Elfrieda Henshaw.  Here's how Tess and Robin banteringly discuss Elfrieda:

"She's in her mid-seventies now, but no sign of these fires burning low, I gather.

"Why did she choose Dearehaven to blaze in?"

"She didn't choose it, it was thrust upon her.  She's lived there all her life, the last of a long line of highly respectable, bloodsucking mill-owners or something.  It was always mills that people of that sort owned, wasn't it?"

"Perhaps not in Dorset?"

"No, you're right; more likely breweries or cider.  But the point is, that they were the real old-fashioned, chapel-going, clogs-to-riches sort."

Did people born in the UK after 1950 really talk this way?  I don't know, but it sure takes me to the Golden Age!  I feel this could be Lord Peter and Harriet, or Roderick Alleyn and Troy, or Nigel Strangeways and Georgia, to name a few of those moneyed and posh bantering whilst detecting British couples of the era.

The employees at the Rotunda have quite a good thing going in a provincial theater that actually makes money, but the whole set-up has been threatened by the arrival of young Melanie Jones, Elfrieda's brash young protege, who threatens to upstage everyone else in the old lady's affections.  When Elfrieda suddenly expires in the Rotunda and Melanie mysteriously vanishes, Tessa's mystery-setting nose starts to quiver.  And quite rightly too, as things turn out....

Morice's narrative style may not appeal to everyone, to be sure.  Characters talk...a lot.  A lot of time we find out about things not directly but through characters' conversations.  It all reminds me a lot of later Christie and John Dickson Carr novels, written in Carr's case after he became so influenced by in his fiction by having written wartime radio plays.  (In Christie's case it may have been the result of the onset of dementia, but let's not get into that.)  However, I prefer early to mid-Morice to later Carr and Christie.  The writing is quite bright and the clueing is really rather good.  It's nice to read a Silver Age mystery where you can tell the author has really thought about the clueing.  So many mystery writers just weren't much bothering with it anymore.  They simply no longer had need of it.

Morice's Scared to Death (1977) did not gets as good reviews as Death in the Round, in part I suspect because it does much less with the theatre milieu (though Tessa does have another acting gig), but I enjoyed it too.  The mystery is a bit messier, but there are still nice clues to follow.

I also love the tartly cynical talk about human motivations:

"....it's amazing what the smell of fifty thousand [pounds] can do to the most upright character...."

"Her idea of the theatre was hanging round the stage door, imagining that Ivor Novello had given her a special look, if you know what I mean?"

The first chapter brings in quite a bit of horse racing (most of the characters are found of a tipple), and this is of special interest when you know, as I explained in my previous blog post on the author, Morice's mother, Lucy Glitters, was supposedly named for a horse.

Why the title?  Well, a rich old lady no one likes keeps seeing her doppelganger in public and she is about to flip out about it (understandably).  Eventually she drops out as well, if you know what I mean.  Who done it?  See if you can beat Tessa to the punch in this clever Morice mystery, where death is a game and the spectators sometimes can seem rather callous.
Posted by The Passing Tramp at 3:47 AM