The Ten Carrs of Christmas: Death in Five Boxes (1938), by Carter Dickson, aka John Dickson Carr

On the fifth day of Christmas my true love gave to me
Death in Five Boxes!

You probably guessed that one was coming, but I also genuinely believe that Death in Five Boxes is an underrated Carr, deserving of more attention.

And, just in case you were wondering, Vox tells us that the twelve days of Christmas run from the birth of Christ (December 25) through the coming of the Magi, aka the three wise men (January 6, the Epiphany).  So I'm on track actually to get this done on time, praise the Lord and all the saints! 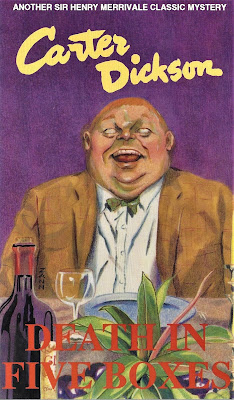 Death in Five Boxes begins as so many vintage mysteries do: with a young man who secretly dreams of adventure encountering a pretty "girl" in distress.  She's standing by an elegant row house in the light of a street lamp and the young man, toxicologist John Sanders, at first wonders whether she might be "an ordinary night-prowler"--i.e., a street-walker or lady of the night.  (Carr's mysteries tend to be more sexually frank than other "classic" mysteries.  In the Golden Age, this frankness was rather refreshing, although by the Sixties it seemed merely jejune.)

However, the girl--or young woman as we would say today--is no hooker but rather respectable Marcia Blystone, daughter of eminent doctor Sir Dennis Blystone.

Marcia is worried about Sir Dennis, who went out to keep an assignation at the flat of businessman Felix Haye.  Marcia, who followed Sir Dennis to this building, gets John to go up with her to Felix Haye's fourth-floor flat, where, after encountering a surly clerk named Ferguson on the third floor at the Anglo-Egyptian Importing Company [AEIC], they find Sir Dennis and the two other guests of Felix Haye--Bernard Schumann, heard of the AEIC, and art dealer Bonita Sinclair--drugged and insensible in Haye's flat.  Haye himself is dead, stabbed with an umbrella sword-stick.  (See the illustration of the 1991IPL edition, the one I read, at the above right.)

Each of Haye's guests has queer objects in their pockets: four wristwatches, the ringing mechanism of an alarm clock, and bottles of quick lime and phosphorous.  Now there's a fine Chestertonian situation for you!  Carr by his own admission was an adept of Chesterton in everything but religion--admittedly a rather large exception. 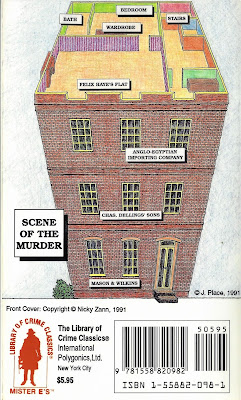 Now the latter impossibility is soon explained, reasonably but prosaically, and while the explanation of the latter matter is held to the end of the novel and it's clever, it's not among Carr's most elaborate pieces of hocus pocus.  So perhaps this is why this novel isn't so well known as many other Carrs.

Aside from the impossibilities, however, Boxes offers an intricate and well-plotted, fairly clued mystery problem (along with five mysterious boxes, which are broken into, their contents stolen, at the offices of Hayes' firm of lawyers).  I found it all quite satisfying.  On my second reading  of Boxes, I found had forgotten about everything about it after two decades except the poisoning method and I enjoyed it all immensely.

John Norris has called Boxes one of his favorite Carter Dicksons.  To be sure, those Carr-hating curmudgeons Jacques Barzun and Wendell Hertig Taylor carrped that the novel depends on"false excitement" and "gimmicks" that are "barely plausible," but we know what wet blankets those two could be about anything they didn't (rather arbitrarily) deem "realistic."  Also people sometimes complain about the identity of the murderer, but I have no real problem with what Carr did here, aide from one niggling doubt about something the murderer did.

John Sanders isn't the ass some Carr heroes are, although Carr-like he does to decide to commit the offense of breaking and entering in order to impress a girl (Marcia, of course).  This leads, incidentally, to a section of the book which would have graced any hard-boiled tale in terms of its splendid narrative tension.  (There's another such section as well, involving posh policeman Sergeant Pollard, who played a prominent role in The Ten Teacups, which would have fit wonderfully in a domestic suspense novel.)

Marcia Blystone seems very much a standard Carr leading lady, in both her youthful attractiveness and willfulness and her underlying sympathy with naughtiness, but she doesn't cross the line into irritating, for me anyway, in contrast with some Carr leads I could mention.  (I'm looking at you, Miss Audrey Page.)

Sir Henry Merrivale doesn't come into the story until it's a third over, but he's in splendid form throughout (aside from his pratfall introduction), humorous yet withal a figure of some real character.  (It wasn't for some more years yet that Carr would turn poor HM him into a buffoonish performing monkey.)

It's Sir Henry who here expresses an important credo of Carr's (it's important in the book too): "There's a lot of stuffin' that needs to be removed from shirts, and a good spring-cleaning wanted in the home of the humbugs."  Carr loathed the canting pious hypocrite, who committed sins in private which he sanctimoniously denounced in public; and if that isn't a timeless message I don't know what is.  Bravo, JDC, I shall raise a white lady to you!