Friday Fright Night is upon you!  Happy Hallowe'en!

The Dancing Detective (1946), by William Irish, aka Cornell Woolrich

The Dancing Detective (published as Dime a Dance, Black Mask, 1938)

Two Fellows in a Furnished Room (published as He Looked Like Murder, Detective Fiction Weekly, 1941)

The Light in the Window (Mystery Book Magazine, 1946)

Fur Jacket (published as What the Well-Dressed Corpse Will Wear, Dime Detective, 1944)

The Fingernail (published as The Customer's Always Right, Detective Tales, 1941)

The Dancing Detective was the third volume of short fiction by William Irish (aka Cornell Woolrich) published, after I Wouldn't Be in Your Shoes (1943) and After-Dinner Story (1944).  As Irish, Cornell Woolrich had also published the novels Phantom Lady (1942) and Deadline at Dawn (1944), so he was on something of a roll with this pen name, as he was with his own, under which he was then publishing his famous "Black" series of crime novels (e.g., The Bride Wore Black, Black Alibi, etc.).

The title story of The Dancing Detective is the only out-and-out "frightener" in the bunch: a modern-day Jack-the-Ripper fable.  It's yet another Woolrich tale about a an attractive young taxi dancer--aka a young woman employed at a dance hall as a paid dance partner.  (The customer paid a dime a dance for the privilege, of which the woman received a small percentage, the rest going to the house.)

How many stories did Woolrich write about these characters?  But he did it so well.  I'm always reminded when he does of Horace McCoy's bleak 1935 dance marathon novel, They Shoot Horses, Don't They?  Woolrich's young taxi dancers always seem so hard-bitten and hopeless despite their youth, blighted as they are by the urban anomie which Woolrich so powerfully portrays.

Here the dime a dance girl, a redhead named Ginger Allen (not Ginger Grant), stumbles into the deadly path of a serial murderer who, it seems, follows taxi dancers to their apartments, strangles them, and then dances with their dead corpses to the tune of "Poor Butterfly" (a popular song about the doomed title character in Puccini's opera Madame Butterfly; see below).  He repeatedly stabs them all the while.  It's like a murderous version of Tom Petty's perverse 1993 music video, Mary Jane's Last Dance. 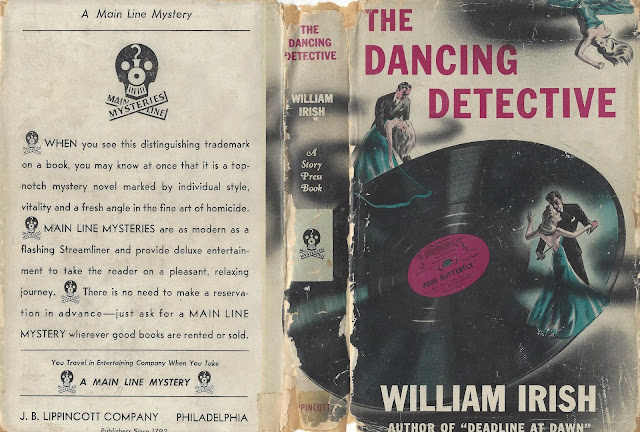 Now, why hasn't this been adapted into a modern day horror film?  It's certainly gruesome enough, if too gruesome to have been filmed back around the time it was originally published.  It's a terrific story, full of pungent taxi dancer slang, with some good subsidiary characters (like Mom Henderson, the ladies bathroom attendant who avidly gorges herself on true crime fiction).  It's marred only by its rather too pat ending, in my view.  Also Dime a Dance is the better title!

My favorite story in the collection, however, is the second one, Two Fellows in a Furnished Room.  This one is about Stewart "Red" Carr (Perhaps Red knows Ginger from the last story?), an earnest young fellow given to taking improving night school classes who comes to suspect, to his horror, that Dixon, his apartment mate and good pal, has brutally murdered his, Dixon's, pretty girlfriend, Estelle, who on the night of her death "Red" had briefly met for the first time, coming up the apartment stairs.  There is plenty of suspense here, but also genuine cluing and detection, and the ending is not as pat as in the previous story, having that authentic Woolrich frisson.  Is it a coincidence that when you put the two fellows' surnames together you get "Dixon Carr"?  I think not!

I understand a film version of this story, The Guilty (1947) was made, although not altogether successfully.

I also liked The Detective's Dilemma, which is essentially a true puzzle problem story with a different, more glamorous milieu than one usually finds in Woolrich.  It's about an exiled European prince who comes to the police to tell them his wife is going to murder him and that he wants them to charge her with murder after she inevitably succeeds.  He's a hemophiliac, you see, and it's so easy in such cases for a malevolent individual to arrange a fatal accident....

When the prince does indeed die, the detective's dilemma is to determine whether his death was really an accident or murder.  This was a "fun" mystery problem story--at least as much as Woolrich can be fun--with the detective making his rationally deduced conclusion on the final page.

I also have to hand it to the final tale in the collection, The Fingernail, for being one grisly little potboiler.  (At ten pages it's by far the shortest story in the collection.)  I won't say more, except that for its morbid humor it recalls certain classics of British crime fiction.

The other stories didn't do so much for me, sadly, even The Light in the Window, which starts off as a superbly written murder mood piece, but succumbs to the over obvious ironic twist, which you can see coming  a mile away.  Probably some people will like it anyway, though.  To be sure, there is definitely some prime Woolrich in this collection, and prime Woolrich is as good as crime gets.